This was my first try making macarons from scratch! I've never really baked anything that didn't come out of a box, so I knew this would be a little tricky, but I'm pretty pleased with the results! I used the buttercream recipe included in the instructions and added a couple tablespoons of a raspberry peach champagne preserves I found. The buttercream isn't quite as thick as I'd like it, but keeping the macarons in the fridge seems to help the shells stay put.

Everything seemed to work out fairly smoothly, though I didn't quite get the meringue right. I used a hand mixer and was in close proximity to my stove, so I was able to pour the sugar syrup at the right time by myself. I'm not sure if I beat the meringue too much or not enough, but I wasn't getting the stiff peaks I was expecting. The meringue was still fairly thick (like marshmallow fluff), but would just run back into itself instead of forming the peaks. For fear of overdoing it (if I hadn't already), I decided to just mix it into the dough anyway and see what happened. I think they turned out pretty well, considering! The cookies are a little bit crumbly on the outside, but nice and chewy on the inside. I'm not 100% sure if that's how they're supposed to be, though. I've actually only had the real thing once while I was in France this past fall, but fell in love and wanted to try making them for myself! I think a little more practice and I'll have it down! I was also surprised to learn they were gluten free! I have several friends who can't eat gluten, so this will be a nice option for them! 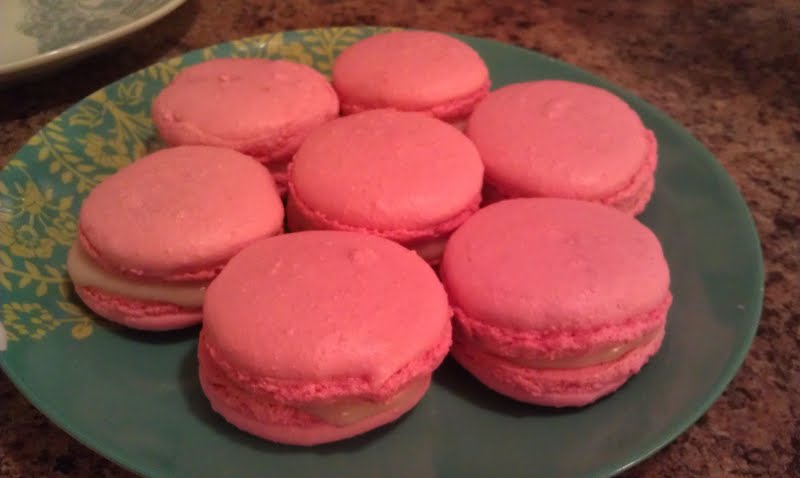