Here it is - a few last tweaks on the words and beams of light. 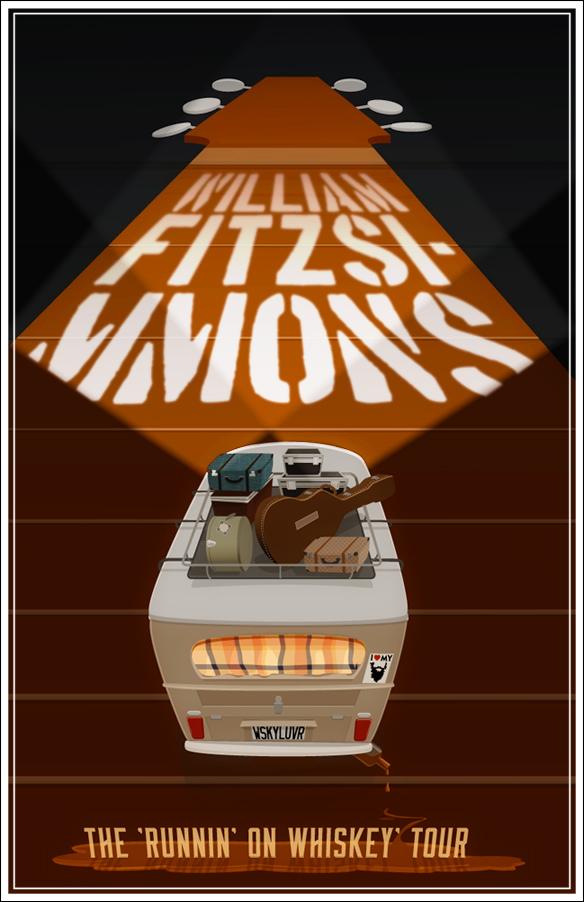 Based on Bronwyn's awesome suggestion, I revised the poster (again) to incorporate the whiskey bottle more into the illustration by making it the exhaust pipe, so now the bus actually IS running on whiskey. Thanks again to Bronwyn! :) So the other revisions are still noted below this one but i didn't like the desaturated look so I went back with the other contrast-y look and fixed the words again. 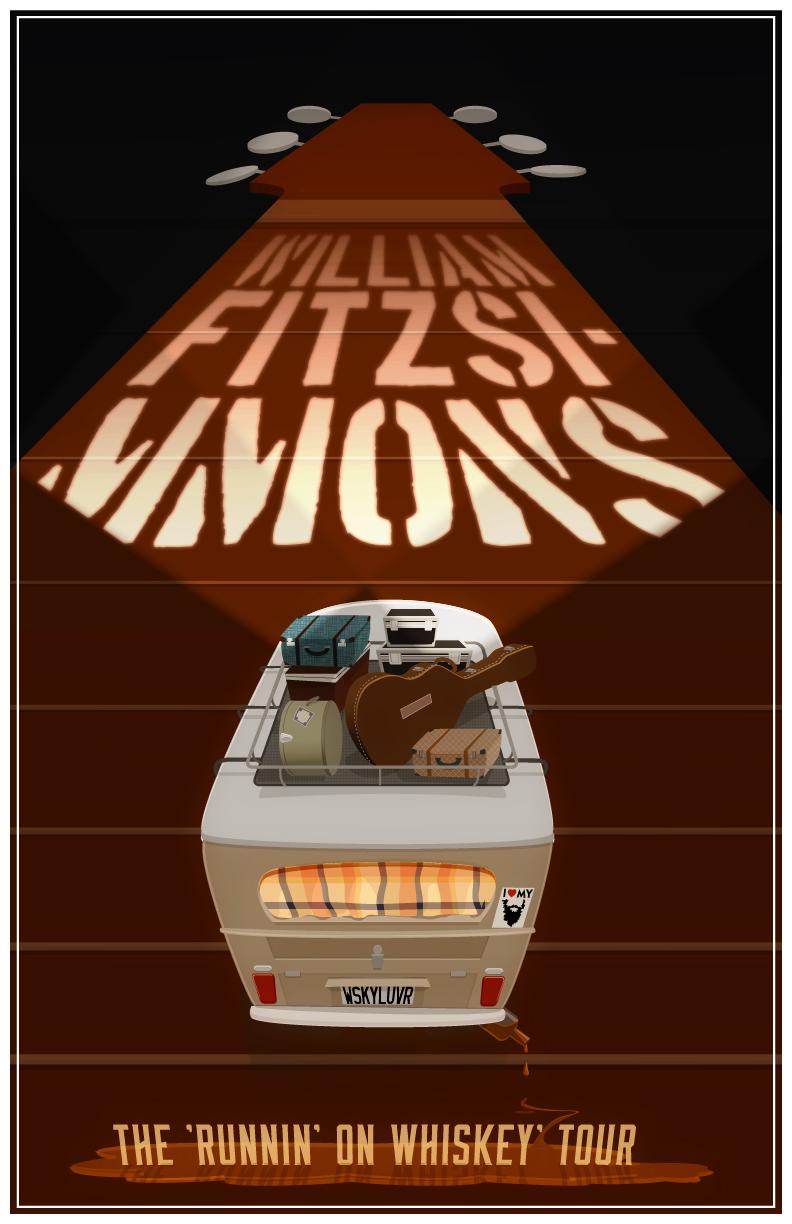 Final update before Office Hours:
- I increased the size of the luggage to fill out the upper space, and added some texture to the 2 suitcases
- altered the perspective of the 'running on whiskey' title
- tweaked the contrast to make the words and bus pop a bit
- decreased the saturation a bit.

Things I'm mullin' over:
- texture added to the fretboard
- if it's too much desaturation
- whether I should add more decals to the van or somehow personalize it a bit more, or if that's overdoing it. 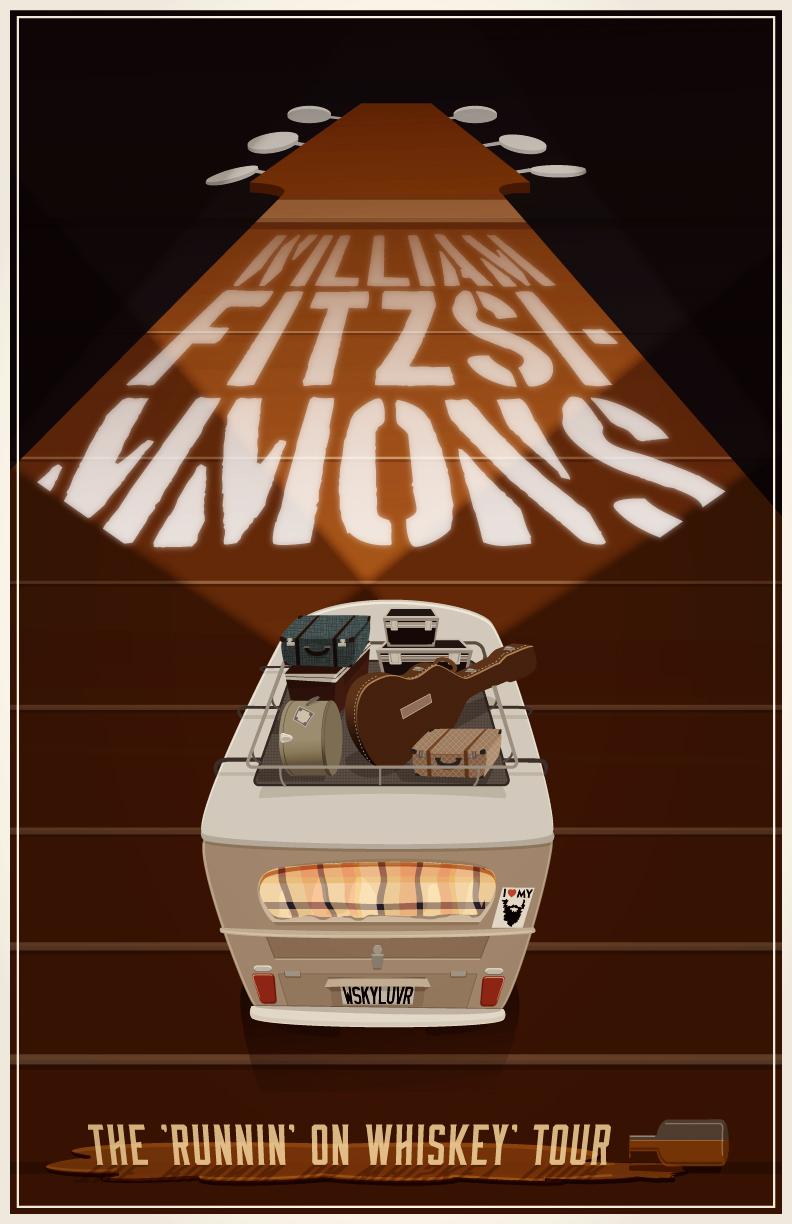 So in this update, I took the comments below and incorporated them (Thanks everyone!), then added little details like highlights / lolights on the van and objects, etc.

- Came up with a name for the tour 'Runnin on Whiskey', and drew a spilled whiskey bottle to house the text.

- Also added a bumper sticker 'I heart my beard'

- Umm... some other stuff that I've forgotten... Oh yeah - I changed the curtain in the back window so that it was plaid. and warped it so it looked drape-y.

Plans for the next draft - maybe adding in some texture, adding little details (stickers to the luggage, etc? Maybe?... ), upping the colours perhaps, and figuring out if there's a better frame that works.
Thanks in advance for any comments / feedback, and please feel free to leave your link here so I can hunt you down and comment on yours too!

Full version and zoomed in version on the van below: 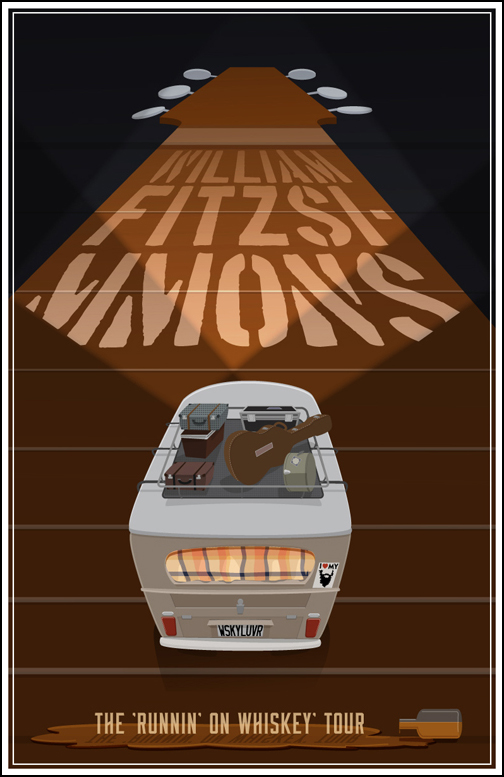 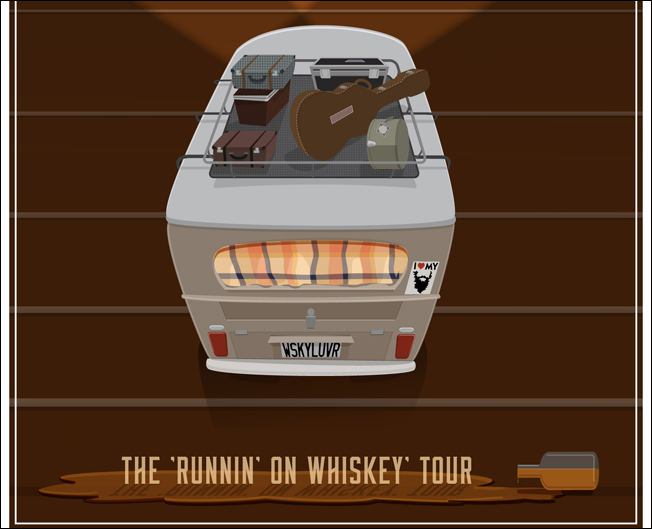 First of alll, thank you to everyone who has been so awesome contributing feedback. Please leave a l ink to your project so i can be sure to find you too!

- I figured the last one looked pretty dead, so i upped the contrast / lights & darks / tried to keep it all within a warmer range.

- I also upped the brightness of the words on the 'road' because for a poster advertising him, I felt you could barely read the name. Also I wanted it to look like the lights were actually shining on / hitting the words.

- I added a rather uninspired border - I tried to mirror the lines of the fretboard but don't know if it has any effect, really.

- I tweaked the fretboard to be more representative of an actual fretboard - not sure if the frets actually compete too much now with the design...

- Am thinking about adding road-type stuff like pebbles, or maybe up the texture I've got on there now.

- Will be adding a custom / hand-drawn title for the tour once I come up with a clever name for it. :) 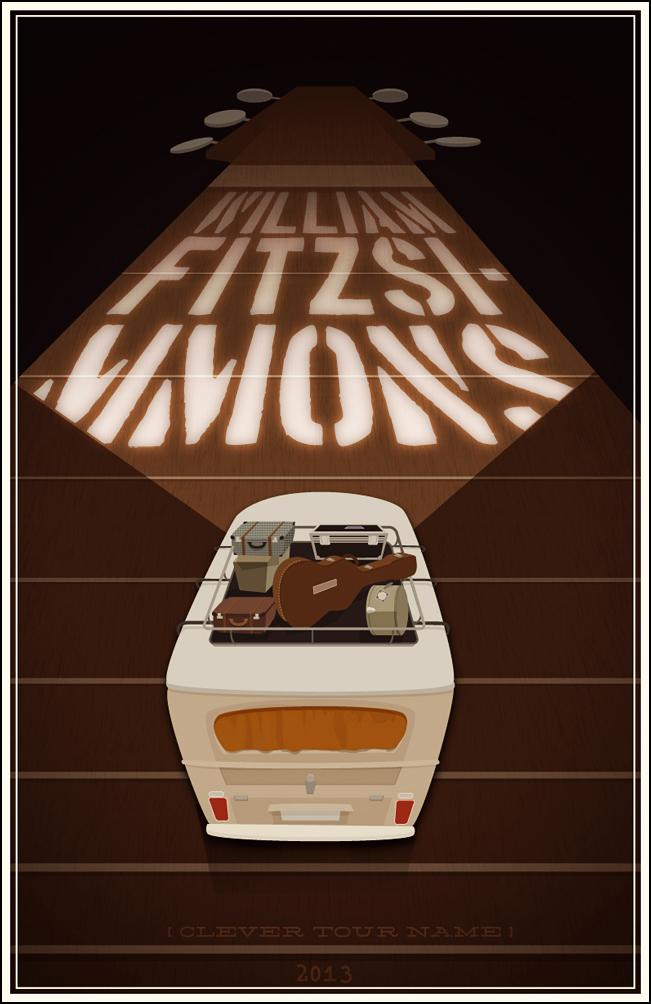 Here's a colour version of my last sketch. I'm not sure about colours - i find that to be the hardest part - and i'm struggling with whether I went too heavy on detail or not enough, i.e. more labels on the luggage? more highlights on the objects, etc. or too much shadow on the fretboard...

I'm looking forward to learning more about adding textures, and revising to make sure your poster is aesthetically pleasing and simplified enough to get the point across.

I'm also going to play around with the 'SPRING TOUR' type at the bottom - that's mostlly just placement for now. 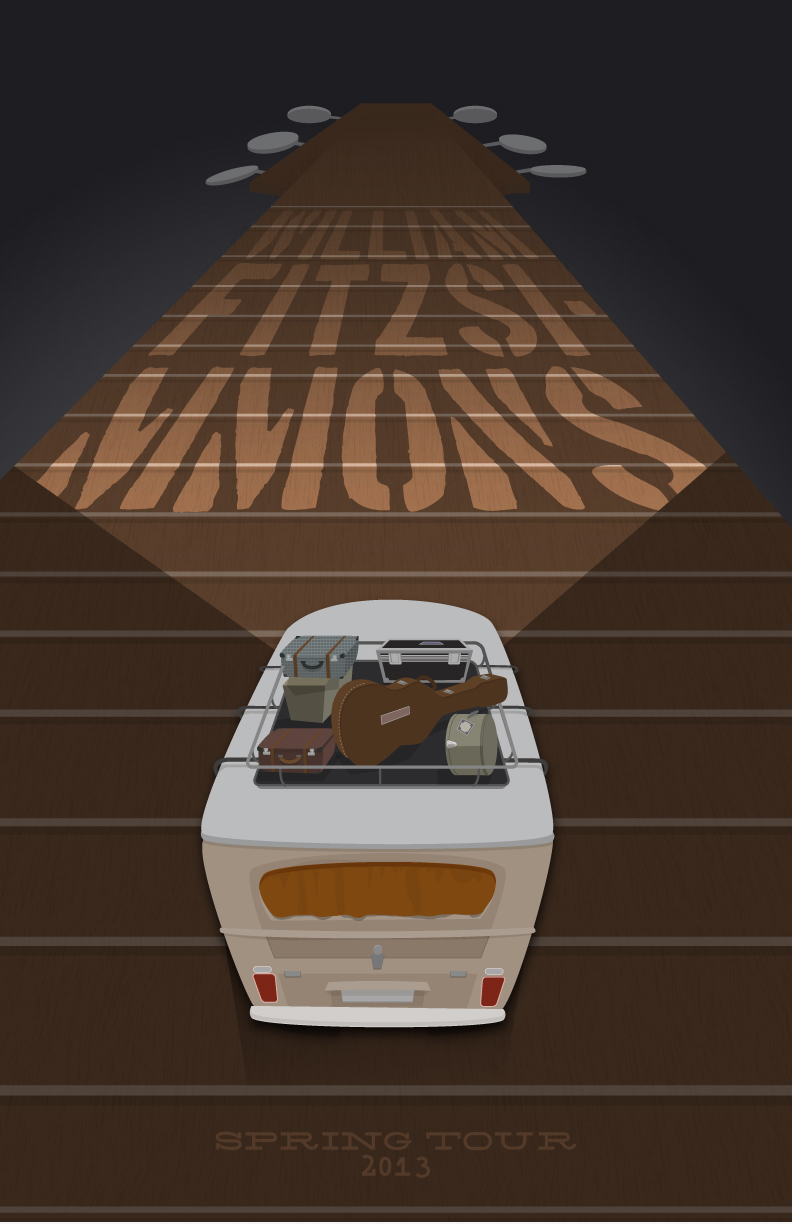 I redrew Option #1 the regular flat way, then noticed that if the freboard of the guitar was supposed to be the road, the writing wouldn't really work the way I'd done it. So, I did option 2 which is more in perspective, but not sure if it translates that it's a guitar. 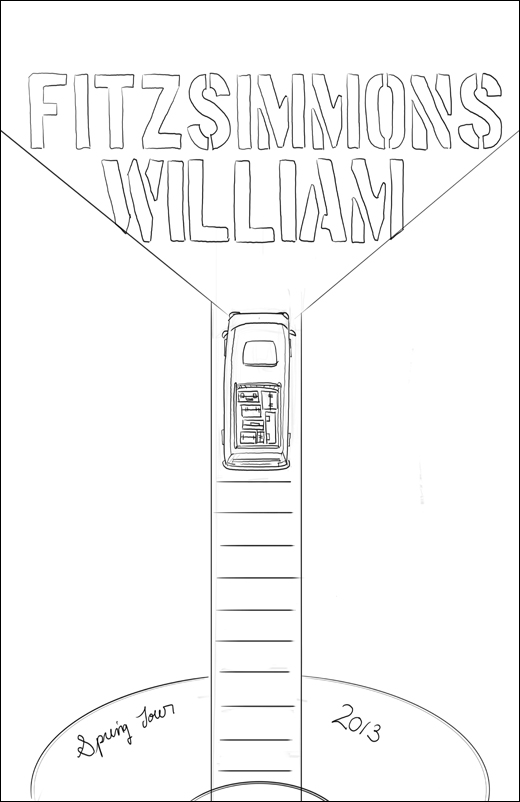 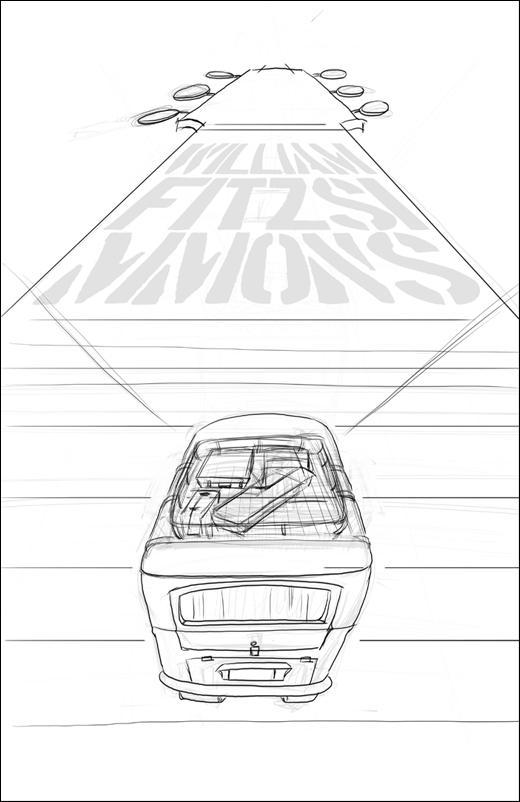 He isn't actually touring, but I'm making him a poster anyhow.

OPTION #1 - Focusing on solitude of touring, this concept would be done with only 3 colours, like a night shot / aerial view of the tour bus, the road being the neck of the guitar, and the high beams displaying Wiliam's name on the pavement. 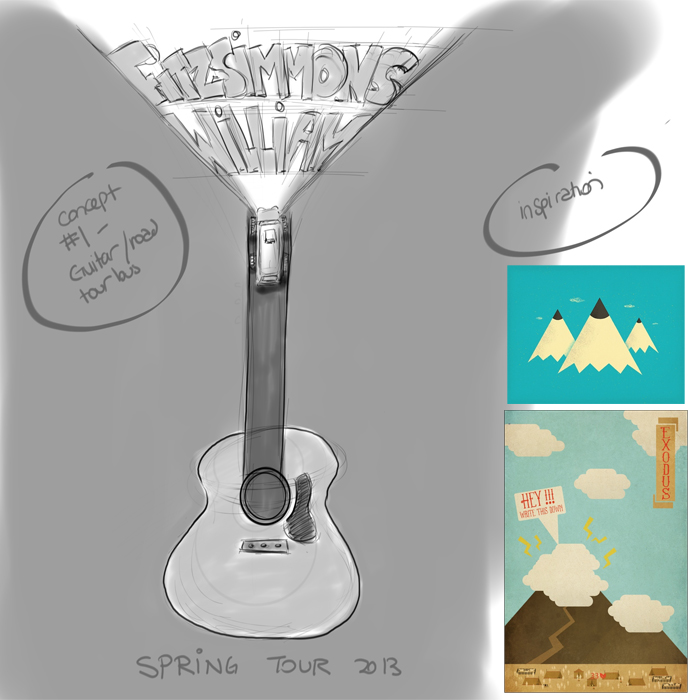 OPTION #2 - Inspired by The Burning House, this one is made up of flat, graphic icons that represent what he would take with him on tour. 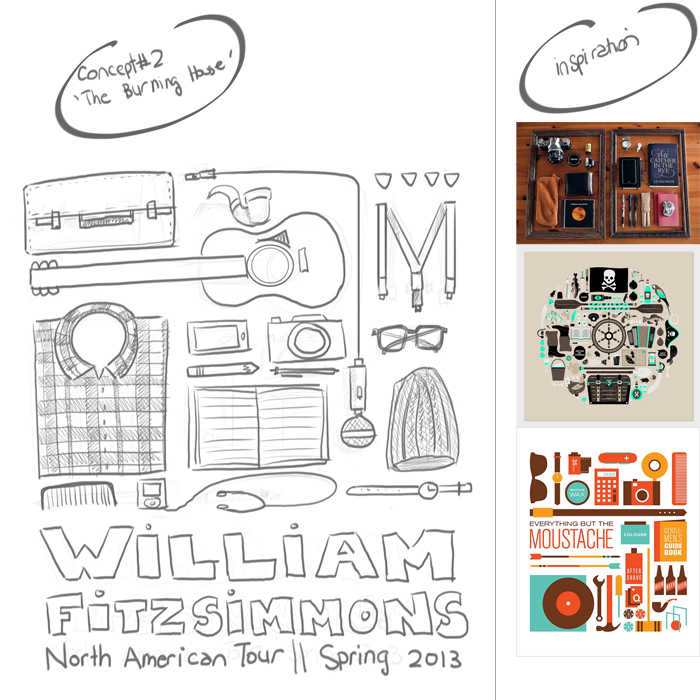 OPTION #3 - I wanted to do something with handrendered typography, so I came up with the concept of using the text to make up his face. I think this is the one I'll go with. 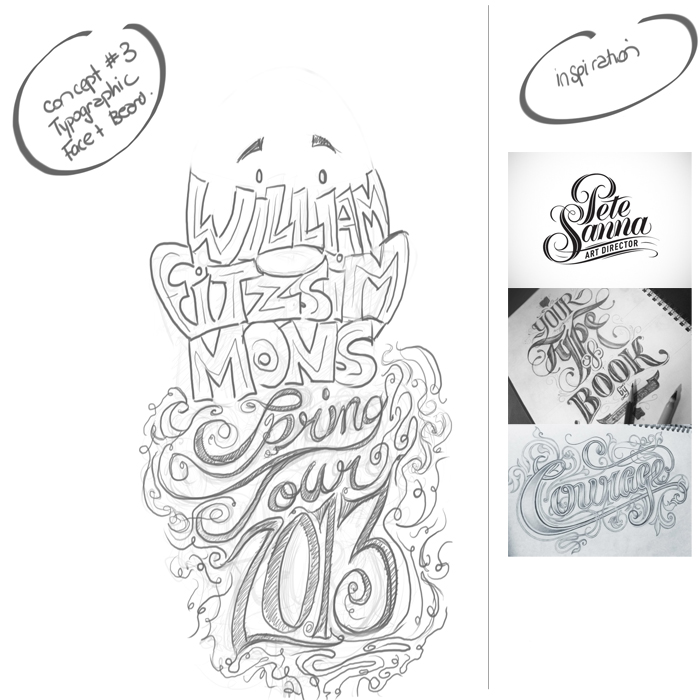 I plan to do a tour poster for William Fitzsimmons who isn't touring but... he's just kind of awesome. And so... that's my story. This is a caricature I painted of him a few years ago when he was all about the toque and glasses.