I bought these pencils to try as I just love matte black. I enjoyed working with them but they do feel much rougher than the graphic. I plan on exploring how they work on different types of paper. I was a bit confused about Mars Lumograph pencils.  I had a 12 B Mars Lumograph and thought it was a carbon pencil but it is graphite. The carbon pencils are Mars Lumograph BLACK.  I also compared them to my Blackwing Palomino pencil which is a very dark black pencil but also has a shine which makes it look lighter. Using a blender pencil seemed to take away some of the graphite shine and make it look darker.

I drew the house scene as I watched the demonstration video. My house ended up a little wacky but I did learn a lot about the range of the pencils.  I tried my 12B Mars Lumograph on the left side dark sky to see how it compared and although was smoother the shine made it appear lighter.

I tried out the pencils on hot press paper and was happy with the result.  I found that the 2B carbon worked well to smooth out the 8B carbon pencil's roughness. 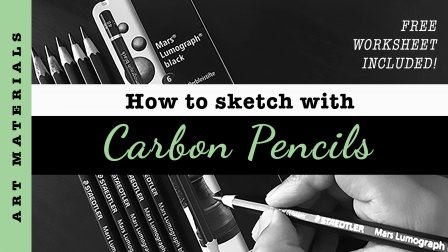