This was a very fun and interesting class. It is January in Oregon so one of the things I learned was that I should have given more time between each interval in the experiments. I feel like I would have gotten more variation that way. However, while I was trying to paint in Phoenix with my family over  Christmas the paper dried so fast I seriously considered buying a humidifier. This will be an interesting thing to repeat during the warmer months.

I noticed in this first experiment that the two cellulose papers didn’t absorb the water the way the cotton papers did. The Canson Montval in particular took a really long time to dry and the water wanted to roll around on the surface, but the colors  also seemed  brighter.

Again the Montval was very slippery and provided the wildest blooms. The smoothest blending was easily the Blick Premier Cold Press. I really like the feeling of painting on the hot press.

I really like the way the hot press paper worked in this experiment but this experiment really highlighted that I needed to leave longer between intervals particularly on the Canson  and Pentalic.

With this granulating pigment I definitely preferred the cold press Blick paper followed closely by the Aquabee. The Pentalic and Canson made the granulation really rough but if I wanted to paint something like lichen they might be a good choice.

For the most part I felt like the best blooms happened somewhere in the middle, after the paint had a chance to set up a little but before it had a chance to get to dry. The hot press paper was my favorite here. I think because it tended to dry faster than the others, the blooms were created through out the entire time frame. 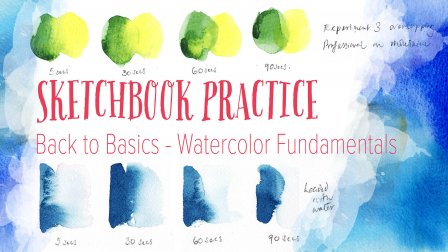