Well I started a while ago but made a hash. This is still a hash but at least I've progressed. I get in a mess with the masks!

I'll get onto the round tower soon. Had journal work to do.

Having tried an easy one above, I have now done the first of yours. Still hard but managed :D Plus I did the extra architrave to start with instead of at the end. Will try the tower soon!

And now - tada - a round tower covered in my own pattern. It had a white background so didn't really need the mono layer, and I've let a little bit of the yellow through to keep the overall picture looking better. I nearly got the warp right - if you don't look too hard :)

I think I'll leave the urn to someone else!! Or later.

btw when I did turn on a black and white layer, it only affected the tower anyway, which was strange. My layer palette did look like yours...

And the final part... Not a very showy pattern but I did get the opportunity to line it up right so the lesson was learnt. I think the near face should have looked more spaced out and the LH face less so - but for some reason I couldn't find the corner handles to shift-click to enlarge so I had to stretch it from the side.

Never used the perspective grid before. Usually warped things. This is going to be very useful indeed! 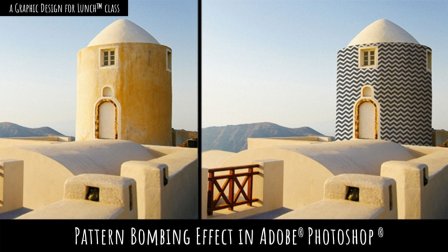