Layer 1 Attempt 1: Used 10mm flat Gold Curb Chain, .25 monofilament, purple Rhinestone Chain and black suede cord. Second portion is 10 mm curb chain and purple craft thread. The thread is thicker than normal sewing thread. We hadn't been told to get larger rhinestones so I had some issues with looping the suede, rhinestone and chain together with the monofilament. The rhinestones ended up being wavy and were too bunched together to get it to form into a nice U shape.

Layer 2: Used 12mm flat Gold Curb Chain, black satin ribbon, 26 gauge gold wire and amythest beads. I had issues with the ribbon since it was a little too wide for the chain and it kept twisting but I eventually got it all smoothed out.. In the video it had seemed that layer 2 was longer than layer 1 so I made it too long. I removed a few links on each side and pulled the ribbon through so I could just cut off the extra length at once.

Final Product: Before I put the two layers together I redid Layer 1; I took off the monofilament cord and replaced it with the 26 gauge gold wire. It's a lot more stiff and wavy than before but it's also more secure and I think it looks better. Rather than wearing the necklace with it laying on my chest, it's more like a choker. The rhinestone layer looks fine if it's shaped into a circle rather than a U.

Once that was done, I linked the two layers together with jump rings in key locations. At that point when I tried it on I realized that the top layer was too big and would hang funny so I took the end links off the top and middle chain to make it slightly shorter. I added a  lobster clasp to layer 1 and one to layer 2 so they both have to be hooked and it worked much better.

It was a long process with a lot of trial and error but I think I'd be okay wearing it in public. This is my first real attempt at jewelry making other than stringing beads in a cute pattern or putting a chain and a pendant together, so I think I did okay. 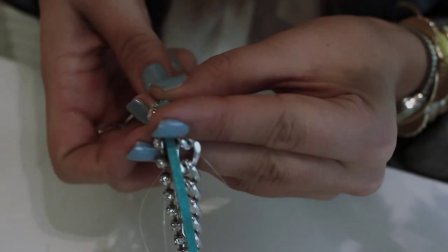