I go to a lot of shows here in LA, and it always bums me out when I'm not greeted at the merch table by a badass poster. I scoured my room for stubs of shows that lacked posters, and I narrowed it down to this great Dum Dum Girls/ Crocodiles double-headlining show I went to back in October of 2011 at the Troubadour.

Both bands play together often (their respective lead singers are married, after all), so I wanted to have the design work for both bands.

DDGs, as some may know, are know for their straight-faced/black-laced hot-and-we-know-it demeanor, but they can rock a good melodic punk song like the best of the boys.

Crocodiles err more on the more mettalic side and have a lot more grinding/sheen/ambience to their music, but still orbit around the same punky sun as their co-headliner.

I drafted up two designs.  One leans toward the girly/cute end of the punk spectrum, and the other is more the edgy/pulp side. can you guess which is which?: 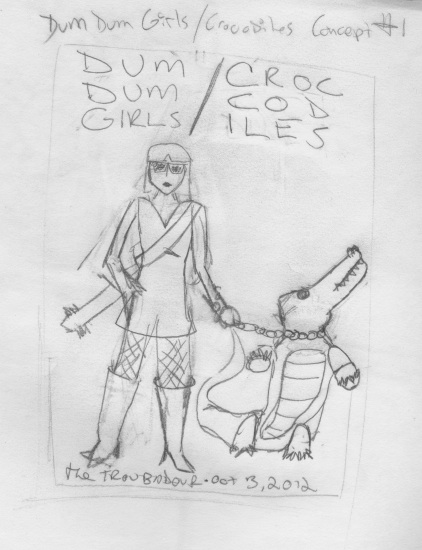 alright so...realism isn't really my strong suit. The idea behind this one is "Pinup with chained croc". I wanted him to be yapping at the camera, but since i lack any sort of formal art education I couldn't quite get the perspective to feel right. thinking about adding some sort of texture to the background, maybe losing her guitar... colors would be pretty saturated green, black, red, ...some sort of bold face type for the band names up top.. 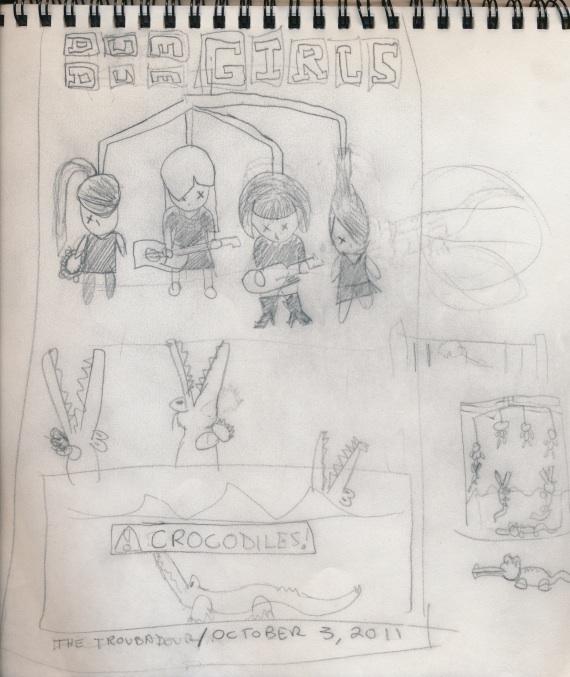 here's the other concept. I liked the idea of hanging the girls on a mobile, voodoo doll style, over a tank of crocs. colors here would be more pastel/muted, and maybe one of the crocs would be hanging from an unfortunate member of the band. tried to work the band names into their respective spaces with the Dum Dums in children's blocks and the Crocs on a warning label. will have to mess with arrangement to make it feel top/bottom balanced, will probably try to create some negative space in the center between the two.