Some of my work from Shading part 1. Oh, how I have struggled this week!

During this project I realized that if my basic shapes are wonky, it doesn't matter how much shading I add or how well I do it.

If the cast shadow isn't an acceptable shape, for example, everything will look weird even if I do "good" values and shading. Or if my cylinder/sphere/box forms are not acceptable, the same thing applies.

I did do a lot of extra practice this week on my basic forms, and to be honest, that is what I was most preoccupied with during this shading/shadow section. I'll keep working on my forms, but wanted to have a go at the shading anyway despite my not being happy with them yet.

Sphere on grey paper (done 8 Jan)  (first time I sacrificed a sheet of real paper in this course!)

Cylinder on grey (done 10 Jan)  - I would try to de-emphasize the dark line at the long top edge of the cylinder, but am afraid of making a smudgy mess. It looks too dark to me. My cylinder had a tiny specular highlight on the front curvy rim which I tried to get with my value 5 (the only value 5 I used here).

Box on grey paper (done 10 Jan) - this box also had a tiny specular highlight on the front edge.

Spheres on semi-white paper (with graphite on my practice tissue paper) - you can see how wonky my circles are. I did a hard(ish) light version and softer light version.

Cylinder on whiteish paper (graphite -- I discovered I really don't like graphite -- it gets all burnished and shiny, and the pencil slides all over the place). I put in my actual cylinder (believe it or not, the only acceptable cylinder I could find in the house. Everything else was either too shiny, or had a bunch of rims and edges on it.)

Just for fun, here are some of my practice pages from the past week. I spent extra time on spheres because those were by far the hardest for me to see and draw the form of the core and cast shadows (those pesky ellipses and that annoying "canonical perspective" were giving me a lot of trouble).

All in all, this has been a VERY challenging week for me. I did get pretty frustrated at one point after a day where it seemed I couldn't draw an ellipse or circle to save my life, but I kept telling myself that learning takes time. And if I compare what I could do a week ago with what I can do now, I can see that I made progress. And that's all that counts!

To try applying my new knowledge to something different, I took what I learned from "contours" and shading, and tried to draw the banana from one of this course's reference photos on my iPad (note that I don't use any helpers when I practice on my iPad, like line smoothing, tracing, etc.). I know 100% certain that I would not have been able to draw this before I this course. So happy to be here! 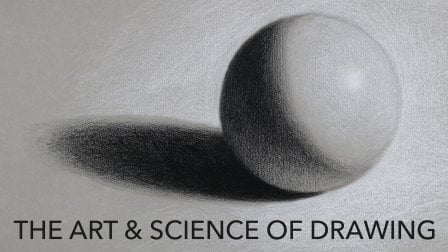