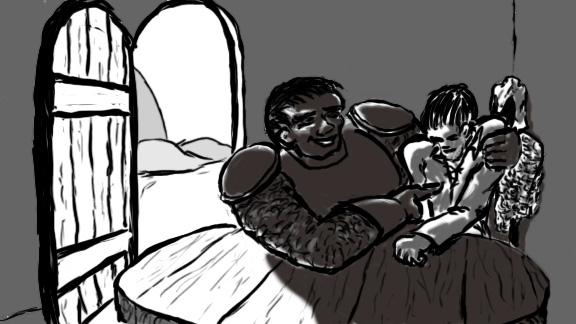 I was going for the Paladin (big guy) trying to drag the Ranger (small guy) back into military service for a purpose as yet unknown, but probably not in the Ranger's best interest. Body angles are supposed to show the Paladin dragging him back to the outdoors and the Ranger pulling the other way. The Rangers' armour is in contrast to the Paladin's - hard used and in need of repair, just like the man. Although the outside is light and the Paladin is smiling, he is cast in darkness, and his shadow is falls over the Ranger. The extreme contrast between the doorway and the Paladin is supposed to draw attention to the Paladin's face, but leave us with an uneasy feeling about him because he is so hidden. Lines of the door bands, the outside hills, lines on the table and the arms are to draw us towards the Ranger. The midtones and his uncomfortable posture are supposed to indicate his ambiguity.