I deleted a lot of the research had posted; it was super long and mostly just here for me to start wrapping my head around stuff. Some of it's here, but my concepts are below!

In short, Dirty Projectors are heavily founded about this idea that history is cyclical and ideas are often revisited in some sort of blurred context; aspects of the original are lost while new elements allow the idea to take on new meaning. This is a big reference to hermeneutic philosophy/linguistics. They also have heavy referencs to Nietzschean/Heideggerian existentialism. More recently they have applied these themes by incorporating different elements of ancient mesopotamia into their lyrics and visual identity. In addition, their music is a very "awkward" product of intentionally (mis)appropriating very different musical styles. The songwriter grew up listening to punk and 80s hardcore records, then went to Yale for his degree is classical composition, and more recently has gotten into contemporary hip-hop. All of these influences are heavily apparent in most of their music.

Throughout the band's history, their visual identity seems to have transformed gradually. Initially, their visual presence was dominated by crudely drawn illustrations on old newsprint or cardboard, coupled with hand-manipulated typography; more recently, they have transitioned into heavier use of photography and clean type set in black or white. They seem to be using a consistent typeface similar to Futura, but without the sharp terminals; it's bothering me that I can't seem to figure out what typeface it is, knowing that I've seen it and used it before. Around their 2009 release, Bitte Orca, they stuck with a limited color palette of saturated blue and red with white and black. Prior to this album, their color palette was much more desaturated overall and seemed to use desaturated oranges/yellows with a hot red accent (though this varies a lot).

Some motifs that have been used throughout their visual identity are circular paint splatters, images of two people side-by-side staring at eachother, and quirky images of David Longstreth (songwriter). I also noticed that on the back cover of Bitte Orca (2009), David Longstreth is seen side-by-side staring into the eyes of Frederich Nietzsche. I hadn't seen this before but seemed to confirm a lot of existential & hermeneutic themes I was picking up from their lyrics (I'll touch on this in a bit). Also, they recently put out an EP titled "About to Die" who's album artwork is a direct reference to Henry Peach Robinson's albumen print, "Fading Away." Lastly, on their most recent tour, they projected images of, what looks like, cuneiform behind them.

A tightrope walker forced to walk a tightrope that has no beginning or end, but travels around in some geometric pattern. This concept hints at Nietzsche's Thus Spoke Zarathustra with his tightrope walking character, which many lyrics seen to be influenced by, but also represents an important theme/idea behind the band that I found in an interview with Longstreth (songwriter of Dirty Projectors). "I like the idea of revisiting an old idea in progressively greater detail… a cyclical idea of history… the idea of sharing or agreeing on a mutually blurred image [and what] happens whe things are translated poorly, mistranslated..". This concept is realized throughout much of the band's work from their band name (Dirty Projectors), to their re-imagining of Black Flag's "Damaged," their reuse of previous album art, their awkward appropriate of contrasting musical styles, and various other things. Tightrope walker also is loosely representative of this sense of danger/death found all over their last record. Considering trying to make the tightrope pattern form the "DIRTY PROJECTORS," but not sure. 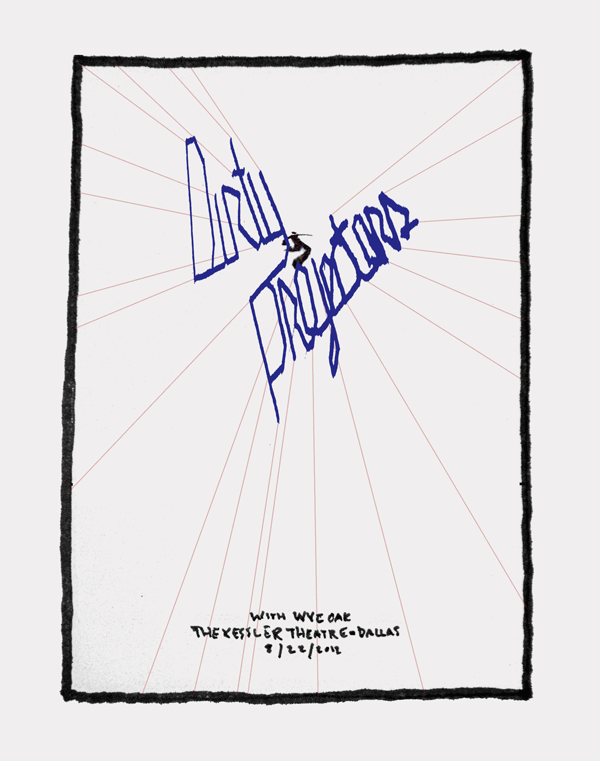 This is my newer sketch, trying to focus more on the composition and trying out the idea of putting the viewer underneath the tightrope walker. My only concern is that it might be hard to get the type to read well and the walker might go unnoticed, but then again this is comped together from a little sharpie sketch. 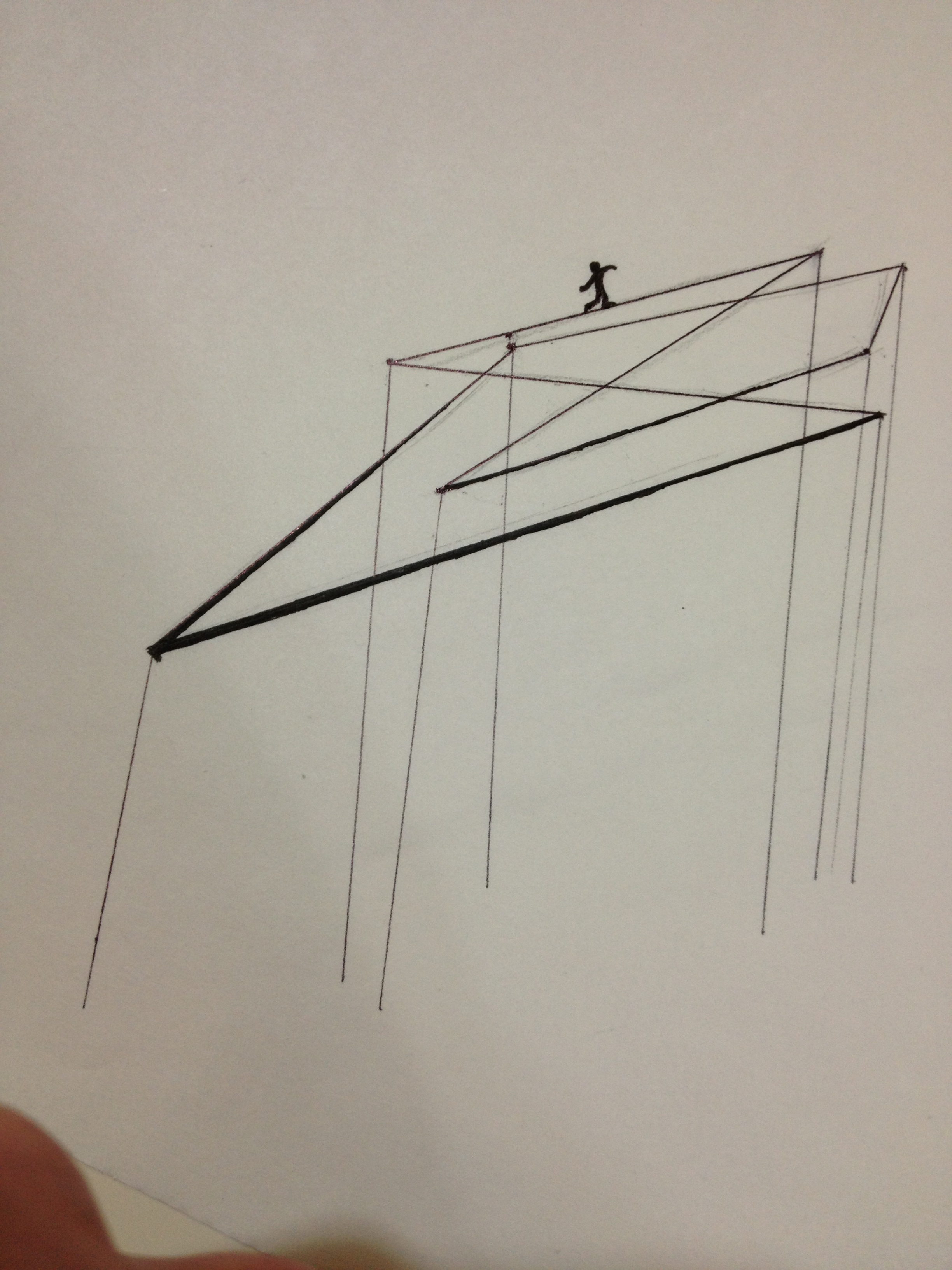 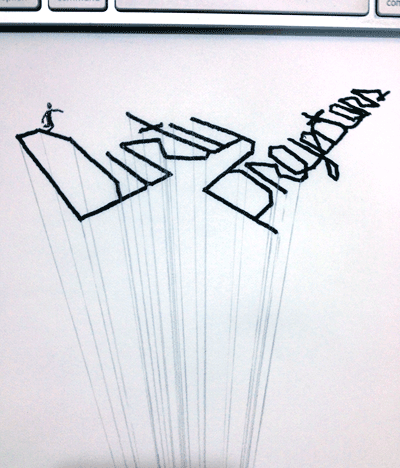 A reworking of an old Akkadian stele/tablet, incorporating elements of the bands identity (such as these circular orb/thought bubble things), with the typography resembling cuneiform. This also stems from the previous idea of revisiting something from the past and embracing both what is lost from the original, as well as the new meaning it takes on. It also stemmed from their lyric "how can I hope to seize the tablet of values and redact it?" which made me think of Hammurabi's Code. In addition, this also comes from the band's recent incorporation of cuneiform in their visual identity (which is seen on their last LP and also is projected behind them during live shows).

Idea for custom type that is built from cuneiform marks 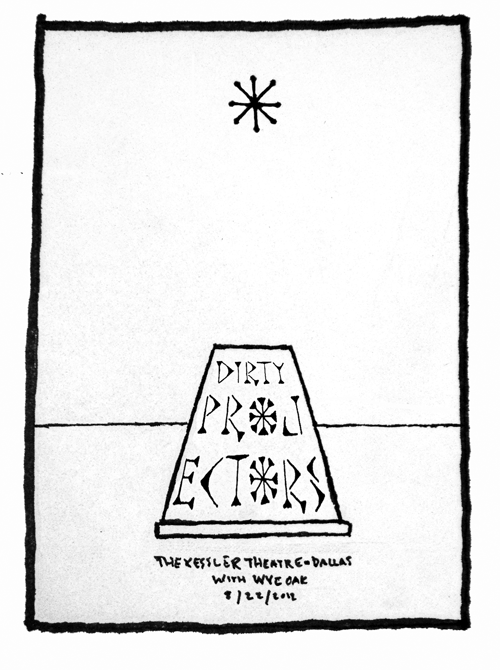 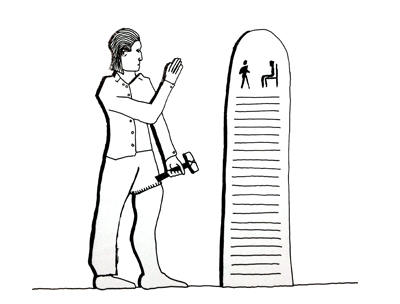 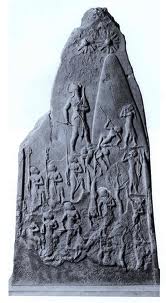 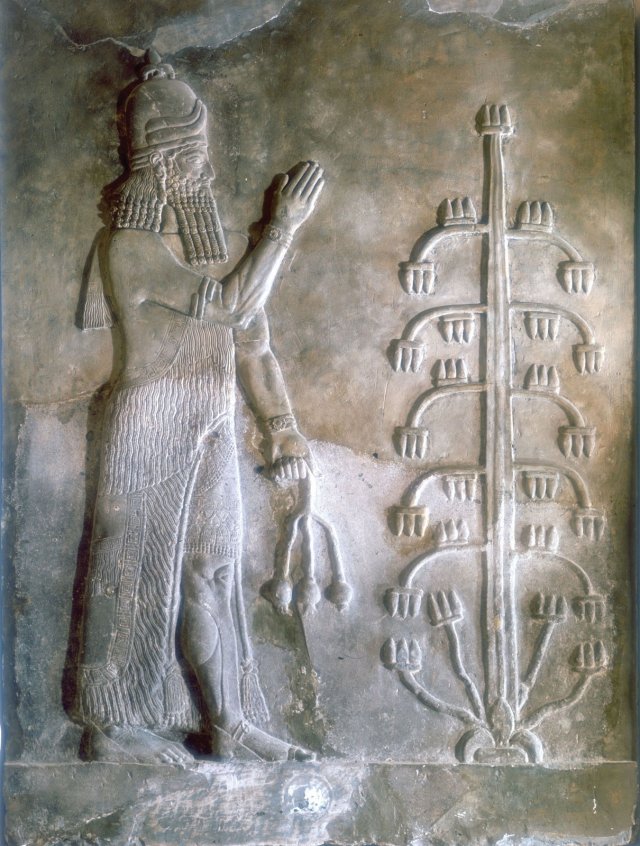 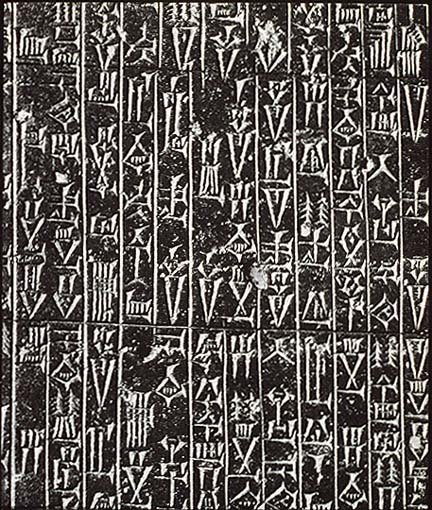 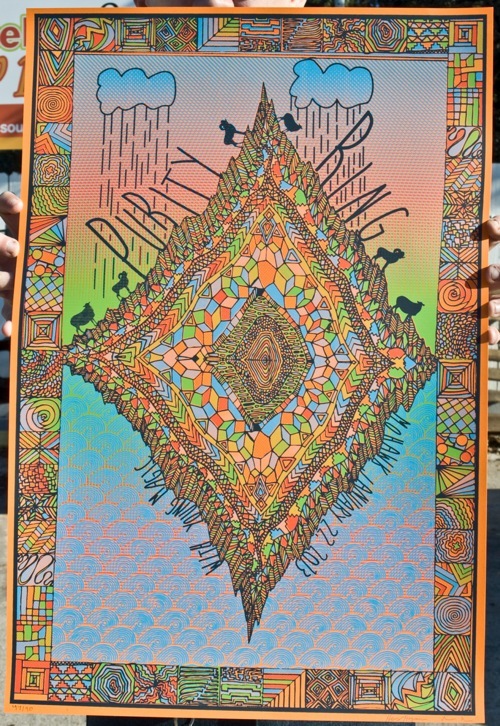 I like the idea of this tiled bored with different patterns/symbols. Also the cool use of this semi-psychadelic color.

A bird in a window singing  a song, juxtaposing hand illustration with photography, paper cutouts, and digital illustration. There will be other sub-elements throughout like wallpaper on the walls, etc. The typography could resemble this akwardness, but I feel like it might be good to just keep it very clean in contrast with the illustration. This is less conceptual in the content (it comes from the lyric "there is a bird singing at my window and it's singing an irresponsible tune"). The "concept" here is more in the execution, using this combination of styles to be representative of the band's awkward slamming together of classical, RnB, punk, pop, and hip hop. While I normally don't do this, I felt like it might actually be appropriate, for this band, to let my imagination run, not allowing myself to really edit, and try to produce something more organic, raw, and crude. 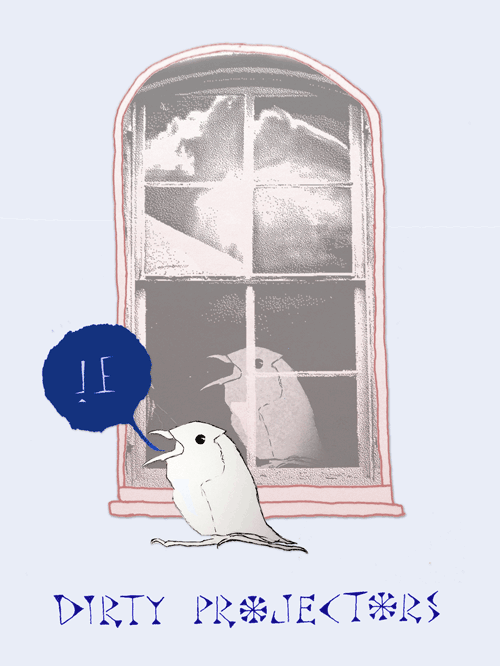 This is something I threw together just to show kind of what I mean illustration wise, since it would be hard to show in a sketch. I wasn't focusing on actually composing a layout here. Just a doodle of a bird I drew/scanned in and made into a cutout with some photography. The cuneiform in the bubble translates to "untrustworthy song" in Akkadian (I think). 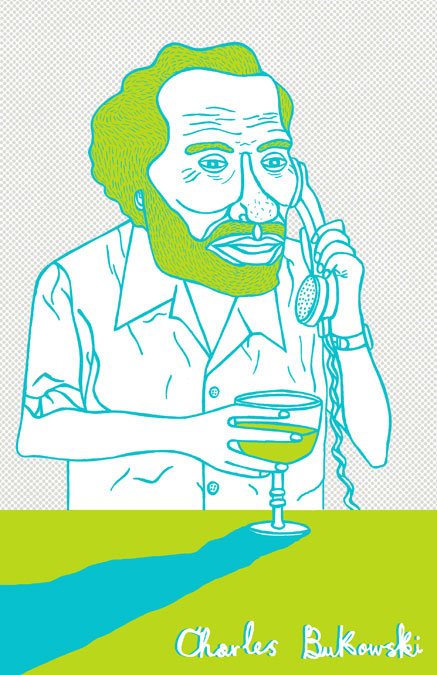 I am thinking about using patterns similarly to this. 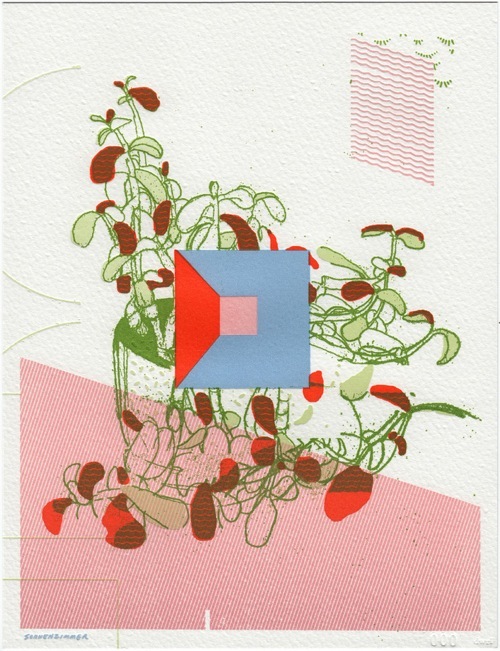 I like this combination of super organic line work with harsh geometric shapes and that parallel line texture in this bottom red shape. 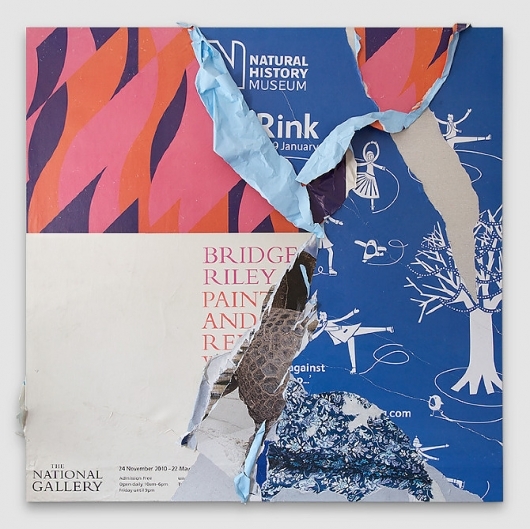 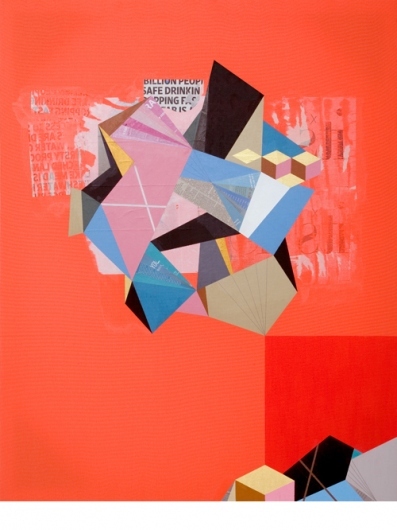 Nice use of color 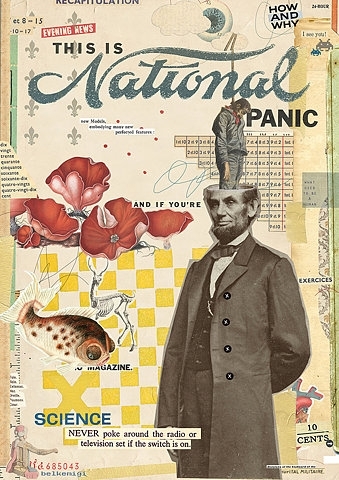 Another good example of the awkwardness / fusion of illustration and photography

I think conceptually, I'm leaning towards the first two ideas. However, I feel like this third concept's llustrative style might be appropriate for any of the three concepts. I also could see that purity ring poster's sort-of psychadelic style working really well for the second concept. Let me know what you think!

Okay, so I've been messing with stuff but haven't updated. Anyway, I started laying the composition out on illustrator to make it easier to play with this whole photo/illustration thing and have changed it up a little bit.

Here is the basic composition I'm working with now. Haven't quite figured out how I'm going to do the secondary type. The main type is just sort of for placement—I'm trying to figure out how to possibly make it seem stitched into the curtain. Started playing with some textures, but when I scale it down for web it seems way more intense. At full size they're significantly more subtle. 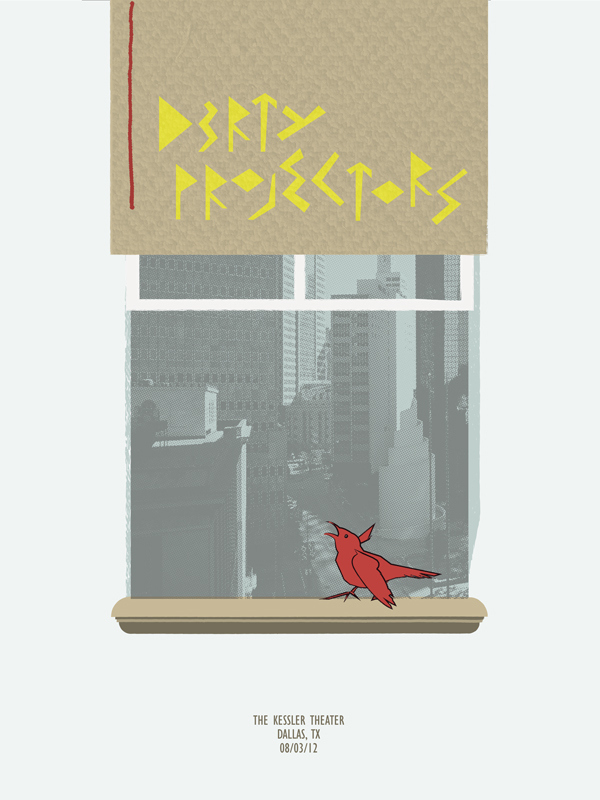 Haven't really gotten to color yet, but this is a temporary palette that lets me kind of play with hierarchy. Feedback appreciated! 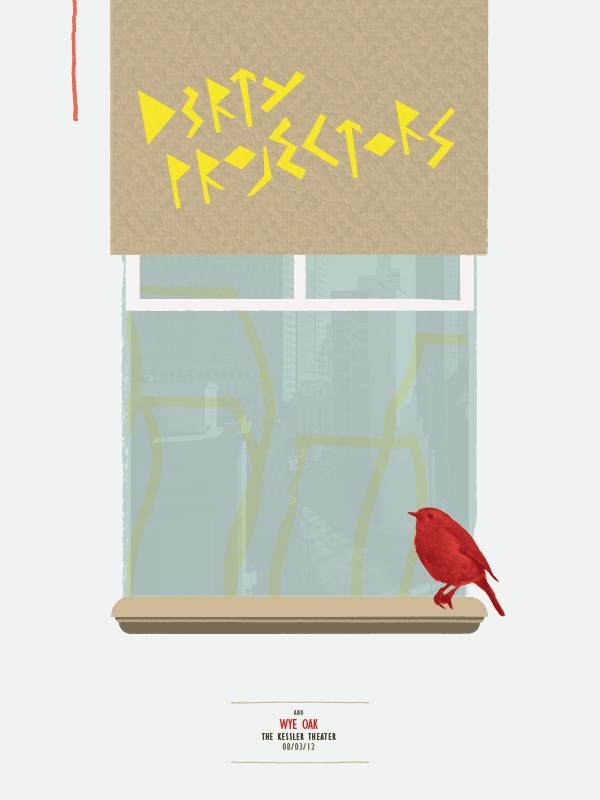 Another rando variation for composition 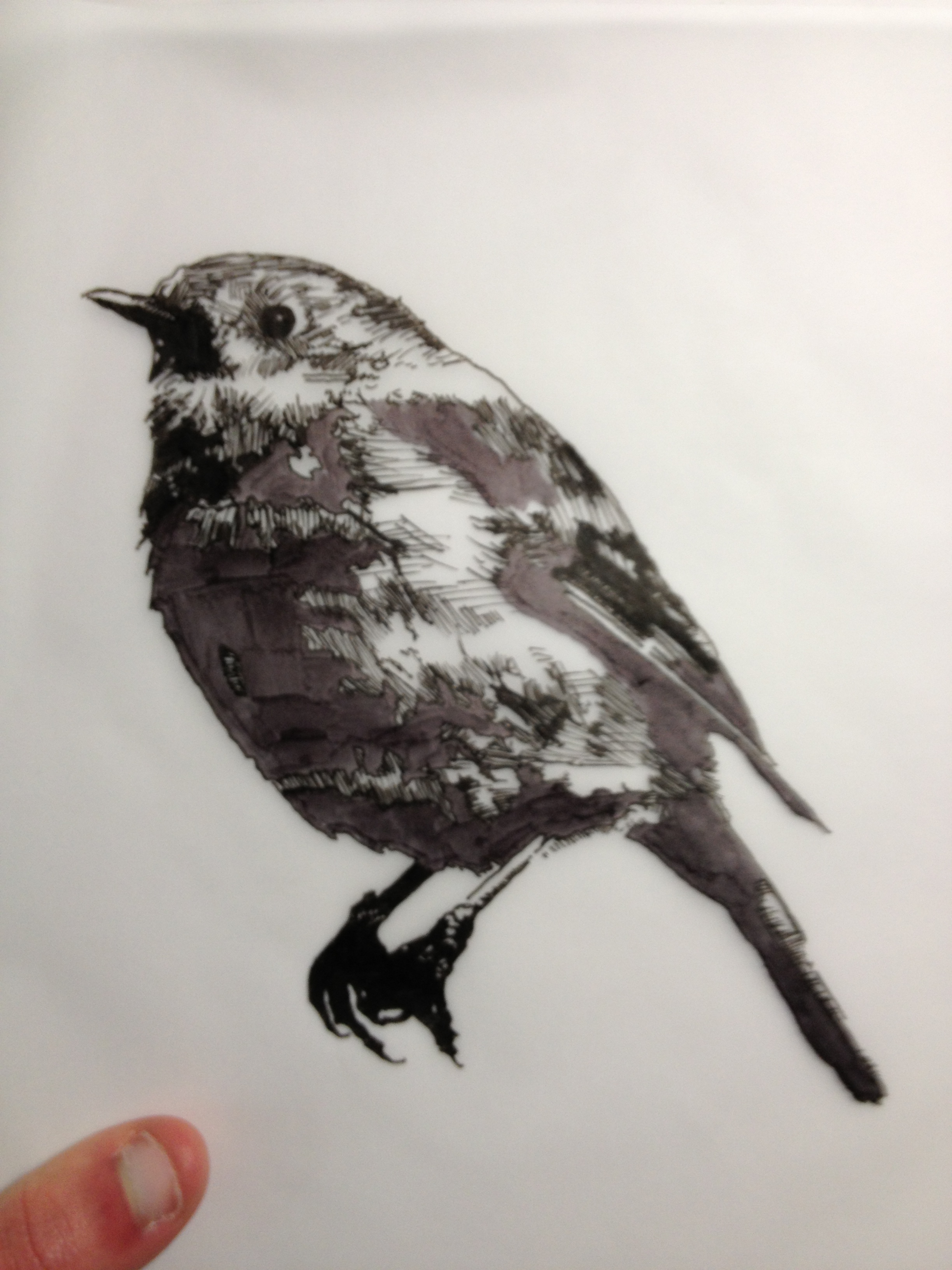 Redrawing some of the linework. Need to scan in. 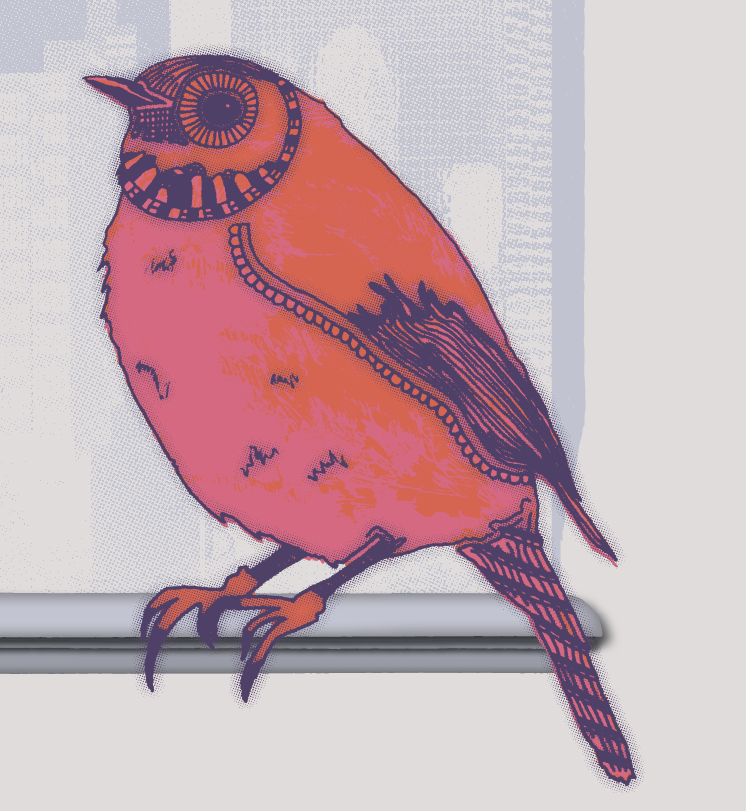 Checked out a bunch of that Nate Duval stuff and pulled a lot of influence from him. Drew out the bird with a fine point micron and tried to keep it really loose / sloppy / doodley. 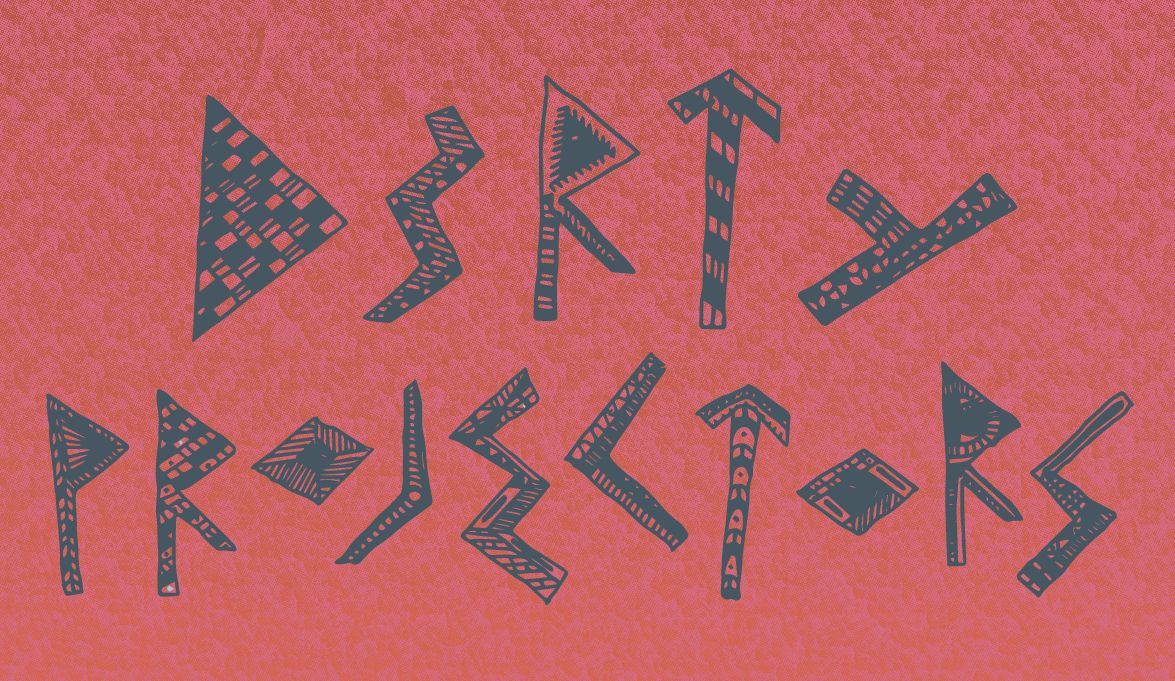 Hand type to match the bird. 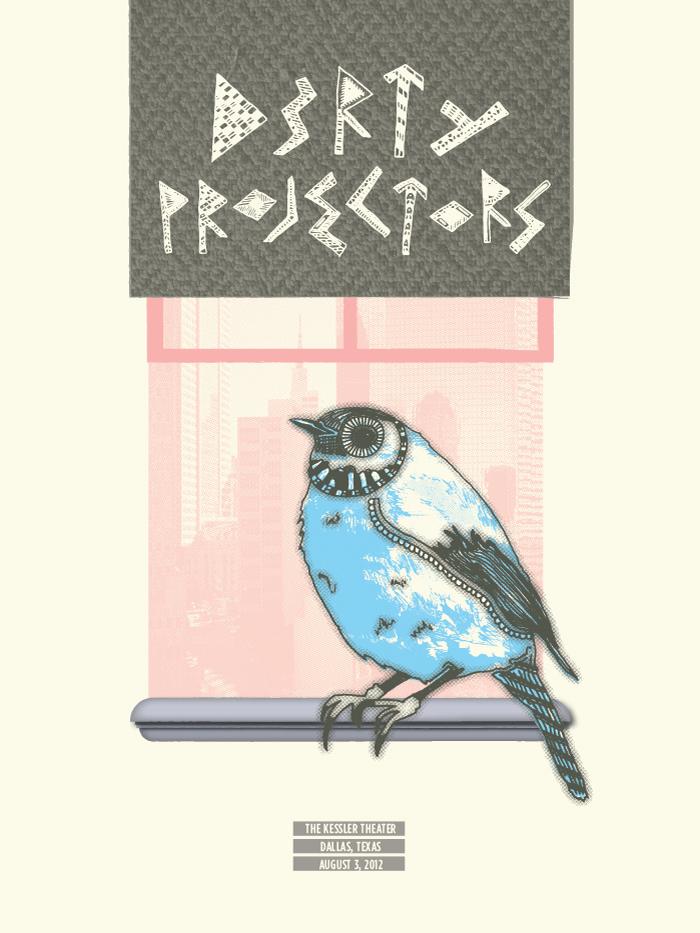 Trying to mess with some goofy color combinations; I thought it'd be cool to sort of veer into intentional simultaneous contrast stuff to get at the idea of "dirty projectors" and their themes. But then again, I don't want something that is super hard to look at and hurts your eyes. Trying to find a balance. Maybe just avoid the idea?