Dinner At The Studio

I've been working pretty hard at meal planning over the last few months, wanting to eat home more often with family and friends rather than out and on the go. I used to cook professionally and, after leaving the field, avoided the kitchen for too long because making the switch from cooking for 100 a day to cooking for 1 or 2 a day was really very difficult.

The planning has paid off in a renewed interest in food, and a significantly better diet with all of the benefits that come with that. So I'm always looking for new recipes to try from a variety of sources, I enjoyed the breakfasts class so here I am.

My roommate did participate in this one! On to Day 1!

The experiment started with my first trip of the year to the best local farmers' market where exactly one vendor had fresh spring asparagus. I followed the recipe pretty much as is with the addition of a bit of cheddar found hiding behind the milk in the fridge. I thought that I had some prosciutto in the fridge as well to add to it because I eat meat but that wasn't the case, I think it would be a good addition the next time I try it though! I used my favorite cast iron skillet which takes the worst pictures but produces the best food.

For the next night, the farmers' market also provided fresh rigatoni and spring onions for the pasta recipe. It went together about as easily as expected. I added a chopped up chicken breast that I had cooked extra a previous night with this in mind (the meal planning habit to the rescue there) I did add chopped tomatoes to the leftovers for a little more sweet and bright flavor.

I actually did a fair bit of substituting on the couscous recipe, in that I took out the cauliflower and substituted actual couscous because I had some in the kitchen and I didn't have cauliflower. I also substituted onion chunks for the brussels sprouts because the ones that I had were no longer fit for humans. Erin had made the frittata recipe from the breakfast class for dinner the night before (with spinach this time!) so I didn't really want to have 3 egg based dinners in one week. I put together some spiced lamb patties that took about the same amount of time to cook as the roasted vegetables, I made the patties the night before, kept them in the fridge overnight and put them in the oven at the same time, it worked out fairly well for timing. I have to have some kind of protein or I'm not going to make it through to breakfast.

I'm hitting the market tomorrow to pick up salmon and new potatoes for the final recipe, I'm looking forward to it!

We picked up the salmon at the IKEA market so keeping the seasoning simple was a really good idea. It took significantly longer for the potatoes to cook though, especially being pulled out at the halfway point. The whole thing from start to finish probably took closer to 40 minutes and the asparagus was starting to get a little crispy at the ends. I added some herbes de provence when I added the lemon juice because I love it.

Thanks for the class! Looking forward to any new ones. 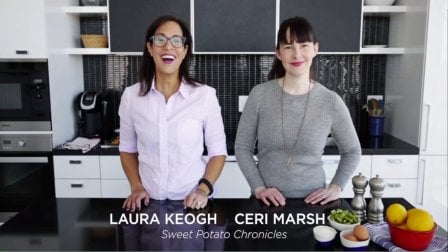