So, I had an absolute blast creating these, the class was informative and easy to follow along with, although I must confess that I already had some experience in creating similar effects in Procreate.

Some of these experiments can be found on my Society 6 and Redbubble Stores:

Here are my attempts with this course:

I fell in love with zebra technique, it was so relaxing and great fun to do and really like the contrast with black and white.

This was my next attempt and although I liked it, I thought I'd have a play a bit more in Procreate and see if there was anything new I could do with it, that led me to this:

Using the edge tool within the liquify controls, I was able to start creating what almost looks like a stained glass window? Maybe that's just me, but I thought maybe I could push it one step further...

I made a selection around some of the edges and then changed the hue, saturation and brightness just a tad to make a little bit of it pop. The possibilities for this are just next level though and I'm really looking forward to carrying on with it.

Thank you for the great course Rich! 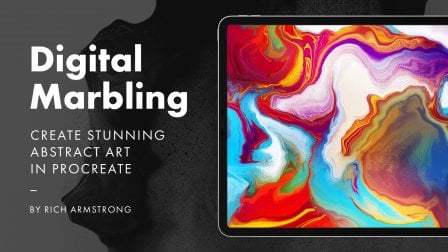