My project is about the deadliest hurricanes. It was not my original choice. I wanted to be able to draw a conclusion out of my map, but as I started sorting the info it got to complex to explain cause i had a lot of data to compare and not that much space to place it in. So i decided instead to pace down and try and nail the translation of information to "graphics" and maybe then make it more complex.

Up to now I'm just comparing the numbers of deaths that hurricanes have caused along the years and states, so the one with more deaths is the #1 deadliest.

I want to add more layers of information to evolve my story. I have two ways I could think of going forward. One will be to add categories to showcase that the category is not hand in hand with the damage it causes. Example there is only a category 5 hurricane on my top 10 list and is number 8 on the list. This could be an interesting graphic way of concluding that no matter the category hurricanes can cause a lot of loss.

The other way, is a more world peace story. I would  have to bring outside data of non-mother nature related death numbers, like how many deaths could a war leave compared to a hurricane, or terrorist attacks, etc. For example if the terrorist attacks of 9-11 where considered in that list they would be number 2. Conclusion: Humans can be deadlier than hurricanes.

I would love to hear opinions on how to make my infographic more interesting, up to now I don't even feel i'm using the map to my advantage. Maybe that is another route to take, which is the state with the highest mortality rate by hurricane disasters.

Here is my sketch: 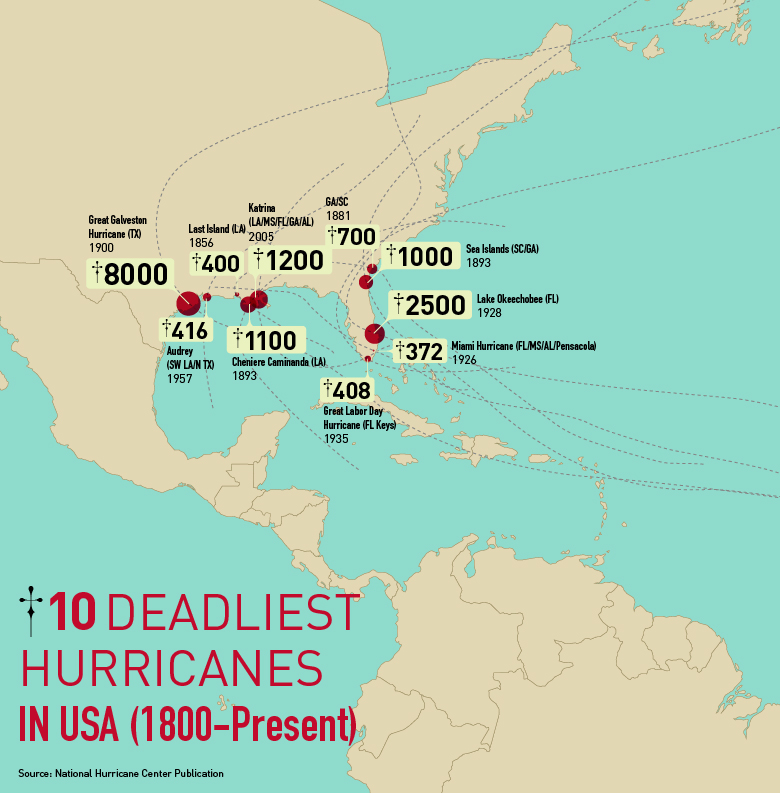 Comments and suggestions are welcome!

Thanks for all the comments.

I tried incorporating most of the suugestions. I decided to include the categories so people could see the the highest category was not necessarily the deadliest. I included color to help show which was the deadliest and the dots are at scale from each other. 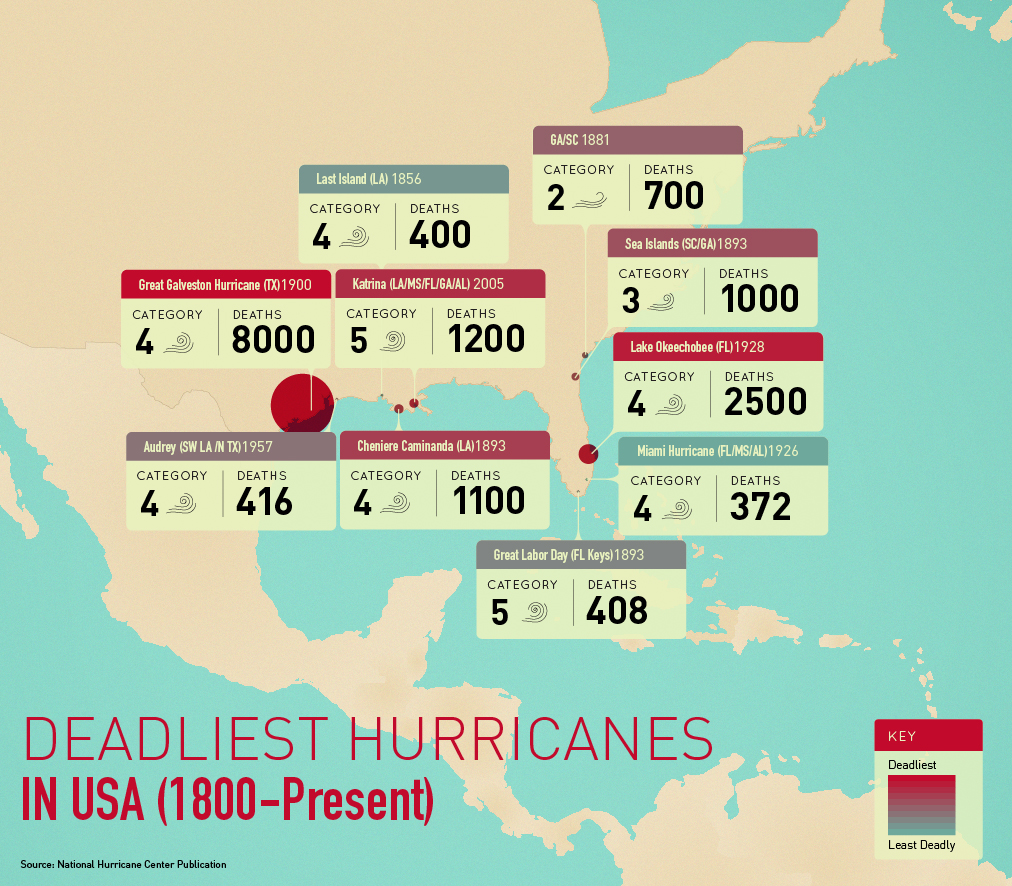 FINAL UPDATE: So I worked my layout based on comments (thanks Robert) and made the title bigger and on the top so draw more attention, so its bolder and more in line with the hurricane subject. I also made the key less prominent and similar to how the data was displayed to avoid confusions.  Hope you like it! 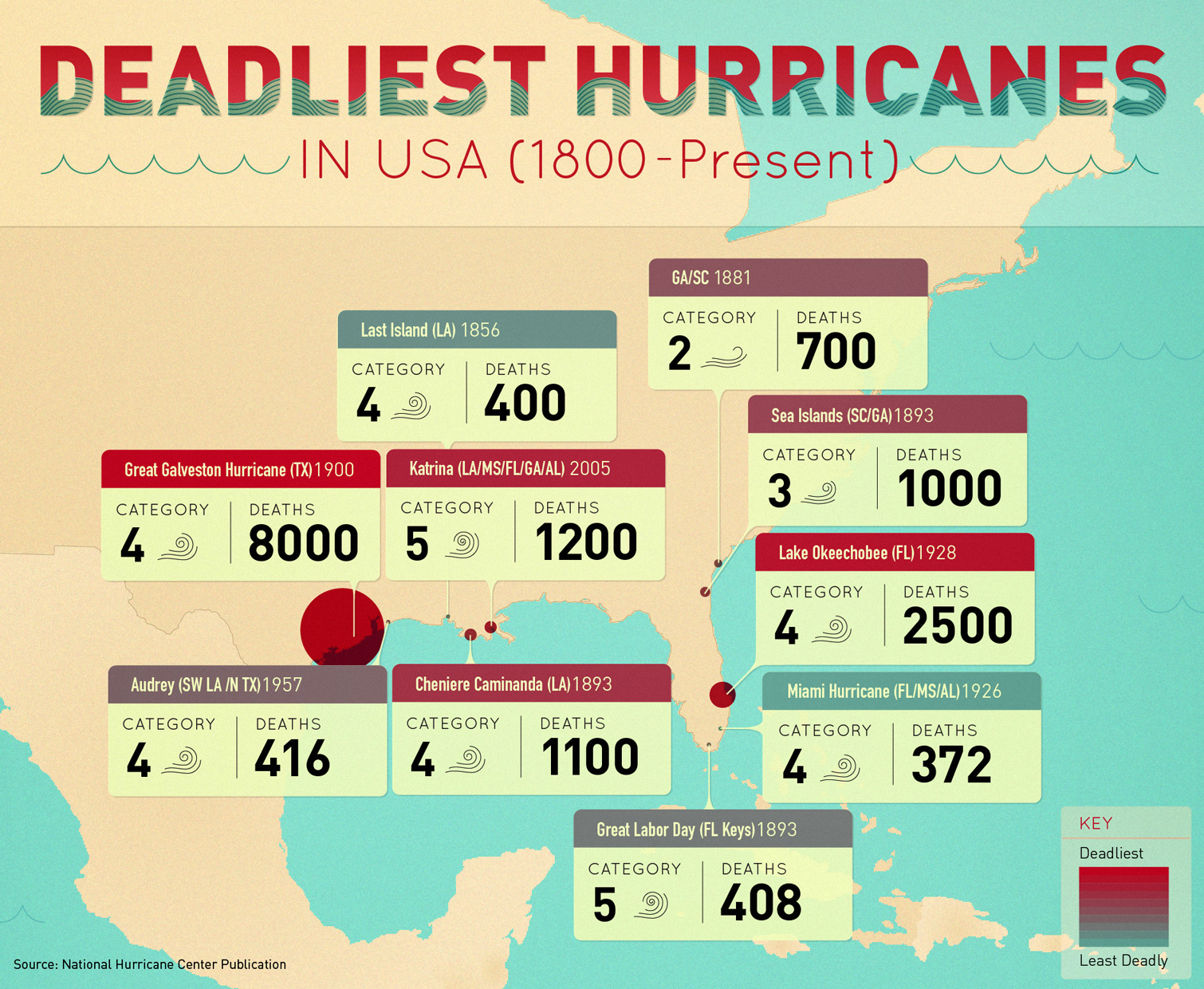