Here is my final version. I chose to work up the Cosmic Crystal concept. I included a pattern. Might do well as party supplies? Should it be flat or as a gift bag mockup? I have no idea if I did this correctly. I am continuing to work on the other two ideas because I think they could be submitted as a group. A tween/teen theme! Is this a thing? I have a daughter and know that there are a lot of events calling for cards and parties at this age. Again, Anne this was a great class. Thanks!

This was a great class for me. Anne really broke the process down into simple steps. At the end I was inspired!

I went to our local Wegman's to look at the card department. They carry several lines including American Greetings and Papyrus. It was interesting to dissect all the components. I had never looked at greeting cards that way.

I decided to do a Daughter's Birthday card. I was thinking of a young teen. I worked out my sketches in Procreate and then imported to PS to add the typography. I actually think these could work for Graduation cards too. I haven't decided which one to carry forward and illustrate for the final submission. But I thought I would just add my sketches right now. 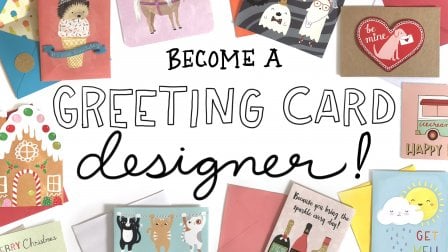