Curves Are So Emotional

I've so been looking forward to this!

So I used black paper strips to make a window to isolate sections of the painting just to see what jumped out at me. I have an idea about personalization so I was looking for a section with a lot of intersections and lines, very busy.

So far, this is the section that I like the most. I might play around with the palette while I ponder and sketch for this one but I kind of like how the deeper white and black sections mellow the contrast between the blue and yellow. I think there might be 2 different types of white in the section that I've isolated but I'm planning on just sticking to one.

Because making a musical selection worked so well for the Kandinsky class, I dug out my longest Thelonius Monk album to work along to. He was a favorite of Mondrian's so I'm hoping that it works for me!

i actually held back a little so that I could do this with the workshop, the last one was so good ;D

I sketched in my canvas, the proportions are a wee bit different but it's not appreciable at this size really.

I finally got down to actually painting and I had a lot of fun with the process. I think I've always looked at Mondrian paintings as being really simple, more like screenprints really, but having read a little more about him and watching the videos and, more importantly, trying to use the same technique, I have a whole new appreciation for what went into those colored blocks.

Taping lets me get as fussy as I want ;D

I also have to admit that, seeing it with the black lines finished like this, I am tempted to just leave it without personalizing it. There's a lot of depth, especially in the white (not the most flattering light in the photo).

I'm still playing around with my personalization but I'll make a decision eventually! ;D

When I'm learning about a new person, I like to read quotes. "Curves are so emotional." packs a lot of punch for such a short phrase and I rolled it around in my head a lot. I had originally thought to use really curved and rounded letters to contrast with the straight on lines, perhaps following a curved path that maybe wove in and out of the frame. I didn't really like it when I took a look.

I started playing around with straight lines for. a while, changing the case and pushing them together. I think I was trying to fit them into the largest of the blue rectangles but it was not working for me. The layout of those particular words did fit well when I incorporated the second rectangle though so I went ahead and added them.

I actually reminded me a little of one of Nobby's sketches, with the texture added to one block. I liked it in that sketch but it wasn't really working for me and I couldn't tell why so I left it on the easel for a few days to see if anything jumped out at me.

And then one time that I was pondering it, the smaller rectangles in the text started popping out at me. I got the paints out again and it all came together. I actually really like it.

Thank you for the great course! Can't wait for the next one ;D 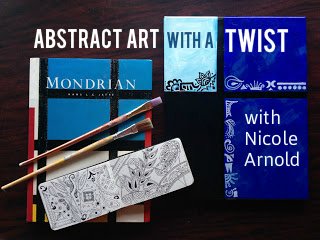