First off I have to say I had a blast drawing this. It is such a fun exercise and the techniques taught in the course are explained very well and the steps are easy to follow. Thank you so much for another great course, Hardy!

But now to my first creature:

For the howler project I used geese as my main inspiration for the head/mouth (because let's be honest, they are terrifying with their teeth on their tongues.) The main body type is that of a raptor-ish dinosaur, though I was a bit lazy with the references here. The fins and crest on the head, arms and back of the creature are inspired by the back fin of a lancet fish.

and the final result

I imagine this creature to live in a dark alien environment with only few sunlight and a lot of water and swamp areas around it. It rather relies on its sense of smell and hearing than its eye sight. Its howl is mostly used as a display of threat while it defends its territory against others of its kind.

Once again I learned a lot from this wonderful course and am looking forward to do the other creatures as well. Hopefully I'll get a bit faster as I go, too. :D 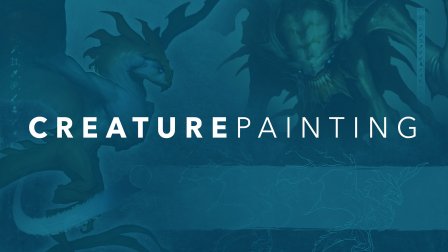 Creature Painting - Design and Render Like a Pro
Hardy Fowler