Create my own monster!

I'm excited to get started on making my own monster following this class. :)  AS Nic suggested, I've uploaded my color palette reference photo.. it's a couple of Disneyland buttons, a frog paper weight, some craft paints and a lego character my son made.  I think this'll provide a cool color range. :)

Sketches of some monster ideas:

Here's the final version of my monster. :)

I finally made the jump and bought an ipad pro.Sooooo much better! I could not find a stylus that would work for me. The adonit dumb stylus with the little plastic disk at the end was the best thing i could use, but it wouldn't pick up everything I tried drawing. So I bought the ipad pro 9.7 so it's portable. :)

As soon as I started drawing with it, I instantly thought "time to visit Nic's classes again!" So I drew a new monster up just to start practicing with the pencil. The pencil is a bit slick on the surface of the Otterbox's cover, but I can get used to it. The pencil works like a charm, it's so terrific to use. 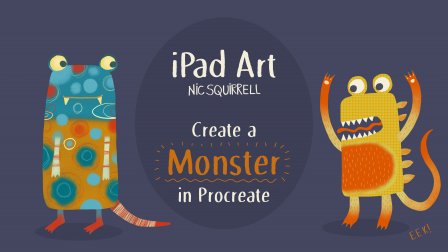