For the After Effects animated infographic video and data visualisation project, I had the opportunity to combine my existing design skills with logo design, creating infographics, animating and combing graphics with existing audio and video footage.

For the first stage of this project, I listened to Dan's voice over several times and broke the copy into eight sections including the opening and end credits. I sketched up some ideas of scenes based on a combination of the lessons I learned through the project and some visual ideas based off Dan's audio. I decided I wanted to combine a range of skills - some of my original designs combined with existing video footage I sourced as I felt this would give me an idea of how a project like this may work in the real world.

I knew at the beginning of this project I wanted to use my existing design skills to create a new logo for this project. After having a bit of fun sketching, I combined a couple of ideas such as a coffee bean shape, coffee cup from above and a coaster to create the logo. My idea was to treat this as a complete project with the idea that this logo could be used on a clients branding, store sign or on packaging.

I sourced video footage of coffee beans falling into a bowl and overlaid a white version of the Craft Expresso logo on top (with some added punch using Dan's Over Shoot Expression.)

At this stage I worked out how long each scene would be and sourced a fun background music that would work along side Dan's voice over and played around with the audio panel so the two pieces of sound worked together.

For scene 2, I sourced this amazing animated stop motion animation of scrunched paper ball folding out into a the dollar symbol. I added three animated bar graphs for oil, coffee and gold and combined the animated with the Liquid Effect to add motion to the scene. To display the billion dollar industry, I used the number counter effect to show that the industry is constantly growing in profits. My idea was that the simple movement of the animation would keep the viewers attention as Dan's voice over conveyed the stats information.

I wanted to use different elements in this project so for scene 3, I combined some typography with cups of copy bouncing onto the screen, using the Over Shoot Expression and the Blop noise. I sourced the colours use in this project from the Explore tab on Adobe color.

For scene 4, I divided the screen in half - one the top, I animated 15 beating hearts, using the trusty Over Shoot Expression, to represent the increased heart rate within 15 minutes after of drinking coffee. On the bottom half I used a static cropped cup of coffee to add some colour contrast and to use a different technique in the scene.

In scene 5, I increased the speed of the beating hearts and animated the static cup into a clock to link with Dan's voice over of how the effects of coffee can last up to six hours. I keep three hearts highlighted to combine with the half clock to represent a happy face. The clock was animated with using the Trim Paths layer option with the lines.

For scene 6, I animated three types of coffee (a regular cup, a coffee-to-go and an iced coffee) using sourced infographics. I animated the icons by adjusting the positions and combined the interiors with the coffee pattern I had used for the coffee bar chart in scene 2. I used the Liquid Effect on the pattern and sipping audio to animate the coffee being drunk from the cups.

In scene 7, I sourced a map of the world made out of coffee stains and animated the map into a spinning globe in After Effects. I used the technique of the Line following the video content to link the Finland text to the location of Finland on the map. I sourced the fact information about Finland to tie in with Dan's voice over. The background uses the same coffee pattern from the previous scene to tie the project together.

For the closing credits, I sourced a different scene of coffee beans and overlaid the footage with the with version of the Craft Expresso logo which tied in perfectly with the ending of Dan's voice over.

I had a lot of fun with this project. It probably took me longer then it should have but I wanted to try and combined new elements I had learnt in the class with skills I previously had and sometimes taking your time to learn new creative techniques is more important that worry about creating a "perfect" end project.

A big thank you to Dan Scott for this lesson, for expanding my creative mind and teaching me some new tricks.

An Irish designer playing with shapes and colour 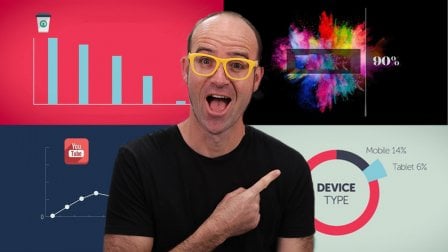