I'm refreshing myself through the course currently (as of February 2021), and this was the social media post I worked along with. I kind of enjoy the low saturation palette of this image from Pexels, although I should probably have messed around with a different short saying to better suit the overall vibe.

The only brief quote which immediately came to mind was, "The mountains are calling and I must go," and I spent all of 5 minutes trying to use that text in this style of image, admitted it was not working at all, and just went with the text from the video.

During the brief lesson on layer masks, I opted to do this Twin Peaks-inspired little graphic. There is some sloppiness with the branches, but I'm reasonably happy with how it turned out.

The selected color for the type is very '90s, and was also inspired by a quote by Agent Cooper early in the series: Referring to the attitudes of Twin Peaks residents in contrast with the city (Philadelphia) he is from, Cooper marvels that in Twin Peaks, "Yellow means slow down, not speed up."

I selected the Evergreen trees because of Cooper's fascination with the sheer amount of Douglas Firs in the pilot episode. I'm not totally sure that these are Douglas Firs, but the intention is there.

I am not totally happy with this, particularly the cutout. I also would have liked some more dynamic images, but I worked with what Pexels AND Unsplash had to offer, making numerous searches over the course of around an hour.

Looking at the completed product, the saturation is a bit excessive and makes the stars somewhat unreadable. I didn't elect to place clouds in the background because, well, clouds are not ideal for watching meteor showers. Also not crazy about the texture of the text in 'camping', but I appear to be missing some basic textures in Photoshop for unknown reasons.

I do like how the colors work together, and think that the Youtuber looking up fits the vibe I was looking for reasonably well.  I definitely learned a lot this time around as well, so that's a major plus.

I made a pretty big oopsie with this book cover. I somehow missed some non-destructive editing advice and way oversaturated the flowers that lay on top of the text. I had to apply the darken effect to the second layer of the two flowers as an overlay, so you can easily see the text through the flowers.

I got carried away with the photo editing. It looks otherwise reasonably faithful to the project shown in the video, and I managed to get an all right gold effect even with that gradient missing from my Photoshop, which really surprised the pants offa me.This is my quick attempt at a Youtube thumbnail. I got images from Pexels, and tried a few different techniques we learned in the course to accomplish the finished product. With this, I took the coffee cup from the exercise on using the cutting tools. I found a wood texture I liked a lot on Pexels, and added the shadow around the cup. I laid an image of a clock (also found on Pexels) underneath the coffee in the cup to retain the liquid effect. I did this after following the layer mask tutorial. This one was a lot of fun to do, and was a fun first experience using layer masks and text. 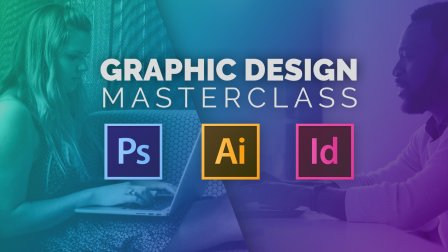