This was my first attempt at pattern design. I drew the flowers and buds first, then drew the leaf/bud shapes. I made copies of each shape and then changed the size, direction, and color until I had a general pattern I liked. Then, I followed the method from the class to create the repeat.

Once I had the repeat in the four corners, I copied the original pattern into the middle of the design and started moving elements around. Toward the end, I reduced the opacity of the other layers just so I could see where everything fit. I ended up coloring some of the flowers blue at the end to add some variation.

I've added my process video just so you can see everything! (It includes a draft of some other flowers I didn't end up using that were on the same canvas.) 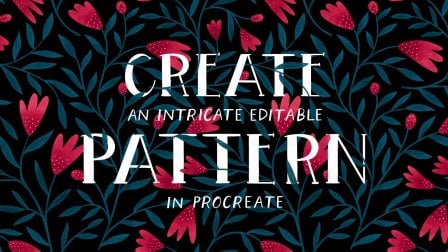