Here are some examples of composite portraits I made using the apps described in the class. I hope they will inspire you to play with your smartphone and create your own unique portraits :)

This is the portrait I created during the class:

The two examples below are composites created in Photoshop Mix.

I took a picture of myself and then another one, with the only difference being my hand covering half of my face.

Then I put the layer with the picture with the hand on top of the other one, I cut out the hand and decreased the opacity of this layer. You can also duplicate the layer and move it, as I did in the second example:

Below is a simple collage created in Photoshop Mix. It has four layers, I just cut out the pieces of photographs I was interested in using as I would do with paper and scissors.

In this example, I only used Snapseed and two photographs - a portrait of myself on a dark background and a photo of a sunset, which I took through a wet windowpane:

In the examples below, I added one additional effect which was not mentioned in the class.

In Snapseed, after using the Double Exposure tool, I applied another tool, Grunge, which is great at smoothening the transition between the subject and the background. Just be careful not to overdo it.

I usually play with the style slider first and once I found one I like, I decrease the texture strength so that it is barely visible.

And with the last example, I have a little bonus!

The picture below required only one app and no cutting out or compositing.

This is the fastest way to achieve a double exposure look in your portrait, though it does not leave much room for creativity.

The app is called Photoshop Camera and it applies different filters, called Lenses, to your photo.

The one I used is called Double Expo. This app is quite fun, it applies the filters to your image even before you take the picture.

They add new lenses and filters weekly, many of them unique, often prepared in collaboration with artists and influencers. I encourage you to play with it :)

A Couple of Compulsive Creators 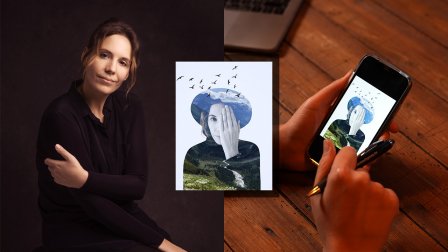