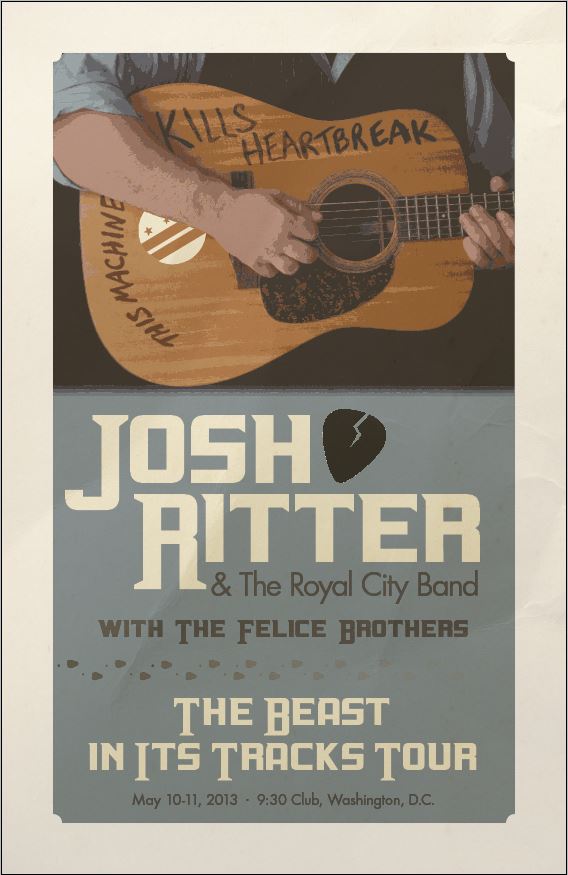 Since my last update, I added a couple of wrinkles ... figuratively and literally. I replaced the divider between the band names and the tour/venue info with a set of high-heel footprints that fade away as they cross the poster. I changed the typeface and, to help offset some space left over when I arranged my type, made they guitar pick/broken heart. The wrinkled paper overlay gave the piece some texture, and helped tie the whole thing together.

Although I didn't achieve as much as I wanted to in terms of hand-drawing, I learned a lot about poster design. I'm ready to push myself in other directions. I can't wait to get started. 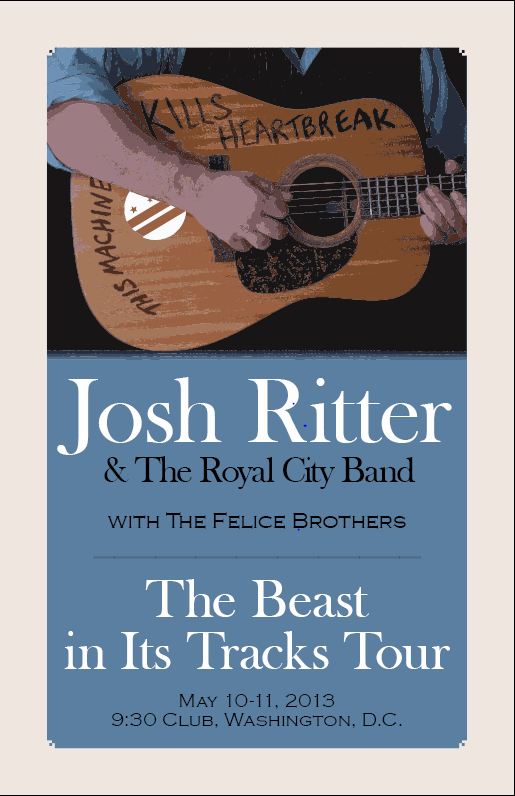 After getting some constrictive advice, I went back and tried to draw my artwork again. I got a half-drawn, half traced picture that made me a little happier, but still nothing that made me as happy as working with my photos in Photoshop and Illustrator. I'll keep working on the drawings, even after the class is done.

So this update is similar to the last one, but with a few significant changes. I got the writing and the D.C. flag sticker added to the top of the guitar. I lightened up the background and, after watching the live office hours on Wednesday night, added a 1-inch border.

The guys also made a good suggestion regarding tracing fonts to make them look drawn. I'd really like to try that on this poster, but time did not allow for this update. But in the next few days I'd like to see if I can simulate a heavy drawn typeface. Short of that, I think I'd like some type that has a 1940s feel since this treatment is based on old Woody Guthrie photos.

Anyone have any thoughts as to how I can put the finishing touches on my poster?

OK, so I'm definitely not ready for a hand-drawn design. I'm seeing some really great artwork from other students, and at this point my drawing is just too weak to expect a respectable finished product. Especially if I'm going to keep pace with the course work. So it's Photoshop or Illustrator for me.

I've also decided on an 11x17 poster, so I can take advantage of cost-effective digital printing. That said, I still want to explore screen printing down the road, and I hope these gentlemen consider offering more courses in the near future. One way or the other, I'll keep pushing myself to develop new skills. This course already has provided a wealth of information about research and seeking inspiration.

Back to this project. I decided to pursue the Woody Guthrie-inspired design, with "This Machine Kills Heartbreak" written on the front of an acoustic guitar. Since I decided against hand-drawn illustration, I took some photos so I could start mocking up the project. I assembled a few quick takes in InDesign in an effort to get a feel for the art placement and typography.

There still will need to be Photoshopping (rather than writing on my Martin), and I'm seriously considering adding a sepia tone or a texture to the whole thing. The black background with the reverse type might be too dark, and that amount of reverse text might be a challenge to read.

I roughed up three art placements. I'm leaning toward the first, which places the photo at the top of the poster. Since the subject's head is cut off, it feels natural to place it against that top border. However, I currently have a thin black border up there, a result of trying to place the guitarist's hands and the soundhole on the top third of the poster. 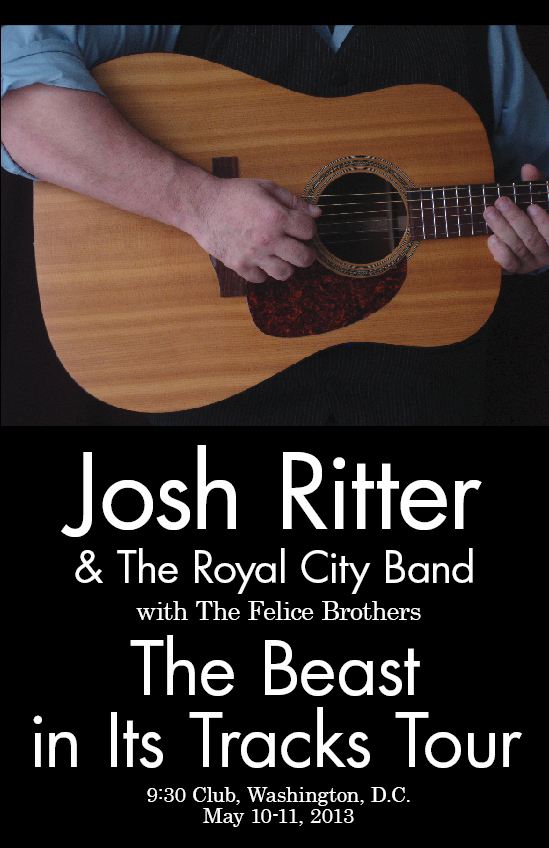 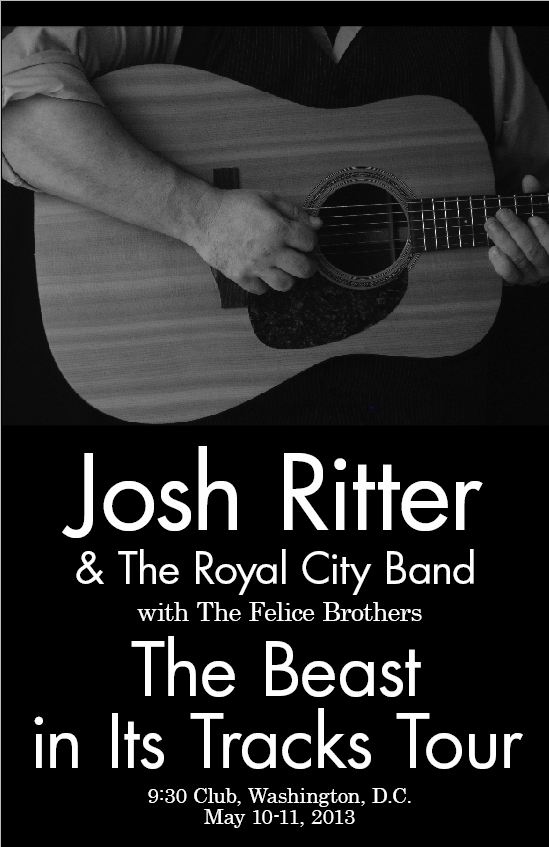 I also tried inverting the position of the text and the photo, but it doesn't feel as good to me. 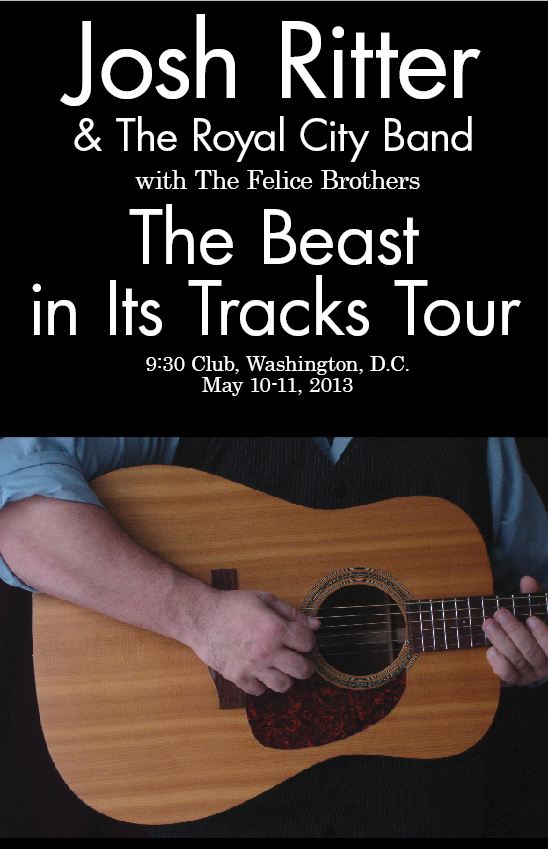 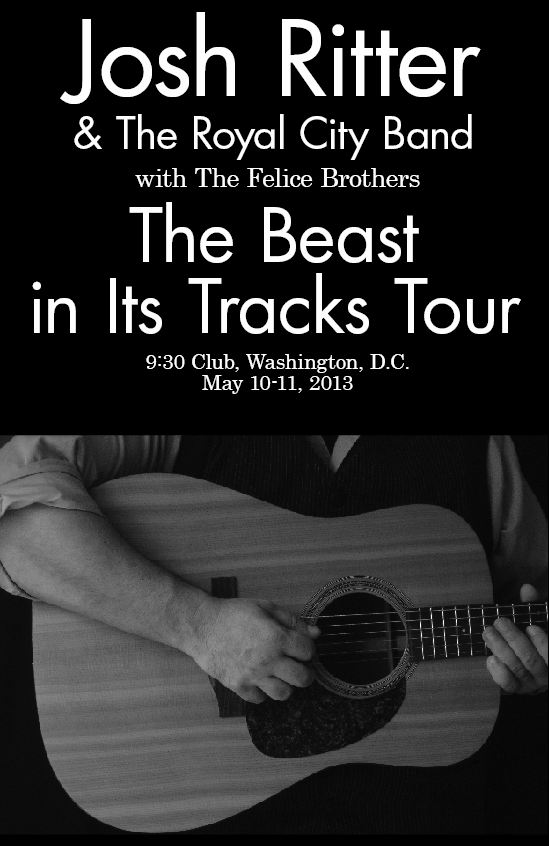 Finally, I split the difference. It's either a great solution or the worst of both worlds. I'm still not sure which. But I plan to have an opinion soon. Any feedback would be greatly appreciated. 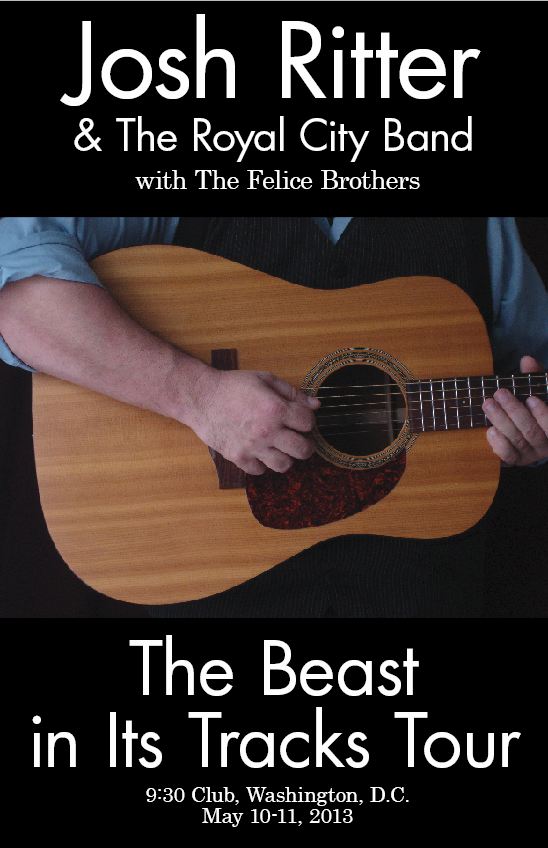 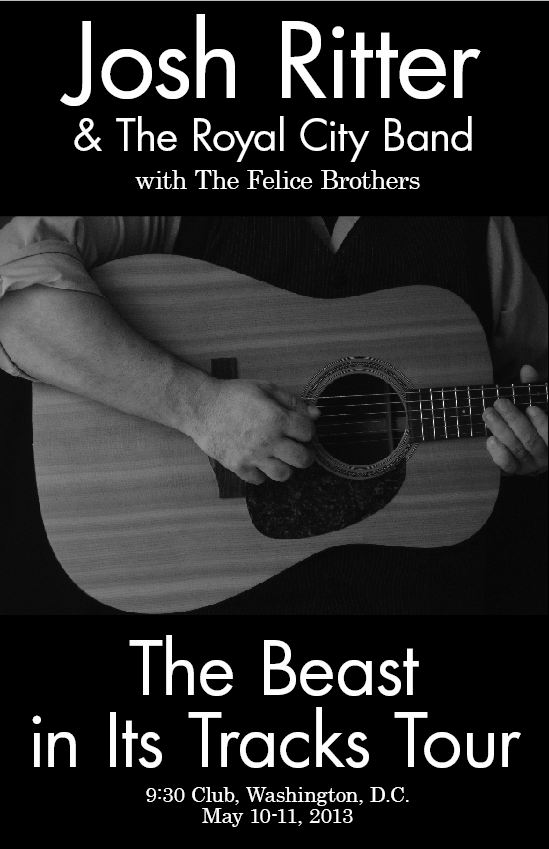 After much hand-wringing over which artist to choose for this project, I settled on singer-songwriter Josh Ritter and his two-night run at the 9:30 Club in Washington, D.C. I've been a fan of his literate songwriting, and the joy he brings to the stage, for many years. And I've been a regular at the 9:30 Club for even longer. So this choice felt like a natural fit.

Josh is releasing a new album, "The Beast in Its Tracks," on March 5.

Here's what he had to say about the album on his website:

I wrote and recorded this record in the 18 months after my marriage had fallen apart. All heartbreak is awful – my broken heart wasn’t unique. But writing these songs was helping me get through the night and I didn’t have the strength to care or question.

It felt like a different record from the start. Far from the grand, sweeping feel of the songs on So Runs the World Away, these new ones felt like rocks in the shoe, hard little nuggets of whatever they were, be it spite, remorse, or happiness. I told all this to Sam Kassirer, my producer and friend. If we recorded these songs, which felt so personal, their starkness needed a corresponding simplicity of production. I hadn’t composed this stuff, I’d scrawled it down, just trying to keep ahead of the heartbreak, and they needed to be recorded like that.

Josh's album covers and posters don't seem to have a unifying theme, but there tends to be a sense of sophistication and elegance about them, especially in recent years.

There are, of course, plenty of love songs in his catalog. But themes of travel, nature, individualism and history often appear in his writing as well (One album is titled "The Historical Conquests of Josh Ritter" and the title of his last full-length, "So Runs the World Away," comes from "Hamlet").

I started by focusing on that title, "The Beast in Its Tracks," which led to beasts such as lions, bears and dragons. But I couldn't completely wrap my head around his meaning. Is he stopping the beast in its tracks, standing up to it, or running for his life?

This led to the phrase "grace under pressure" and Hemingway's writing about bullfighting. Ultimately I felt like Josh wouldn't use an image of a bullfight in his visuals, so I kept brainstorming.

Perseverance was my next train of thought. Who perseveres? Boxers, soldiers and runners, to name a few. But how would Josh wage this battle? What is his best weapon in such a fight? His guitar, of course. That led directly to Woody Guthrie, and his famous "This Machine Kills Fascists" scrawl on his guitar: 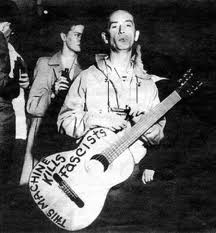 It's easy to imagine Josh taking this approach figuratively, with his new songs, and literally by writing his mission statement on his instrument. As you can see from my sketches, drawing is not a strength. I want to push myself, and deveolp skills, but I also want to have a project I'm happy with at the end of the class. So this project might well be moving to Photoshop. But I want to try refining the sketches before deciding for sure. I feel like this idea is an accurate representation of Josh Ritter as a musican, and I think it ties in with the title of his album/tour. The one thing it was lacking was a sense of location, a problem I've solved subtly by adding a D.C. flag sticker below the bridge of the guitar. 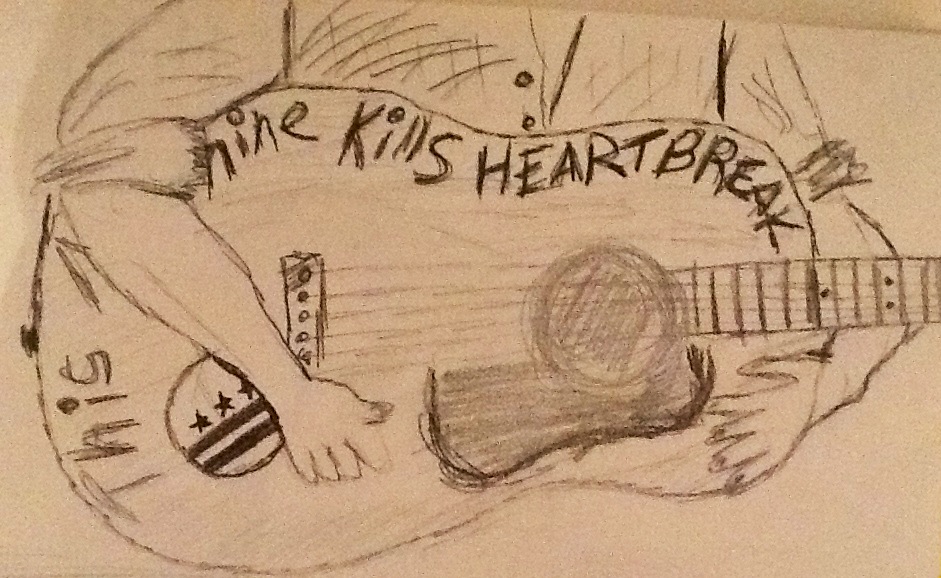 My next idea continues along the lines of perseverance and grace under pressure. It's a depiction of Ulysses S. Grant. Specifically, it's the Grant memorial located near the Capitol. The sketch is from a photo I saw on Shutterstock, but it's an image I could go get on my own as well. This perspective doesn't show the entire memorial, in which a battle is raging around Grant. Yet he remains steady. It's an interesting study in keeping your cool when the world is falling apart around you. It's got a strong local connection, and it's not as obvious as trying to incorporate the Washington Monument into the design. Will Josh Ritter fans look at this poster and "get it"? I'm not really sure. But I find the image interesting. 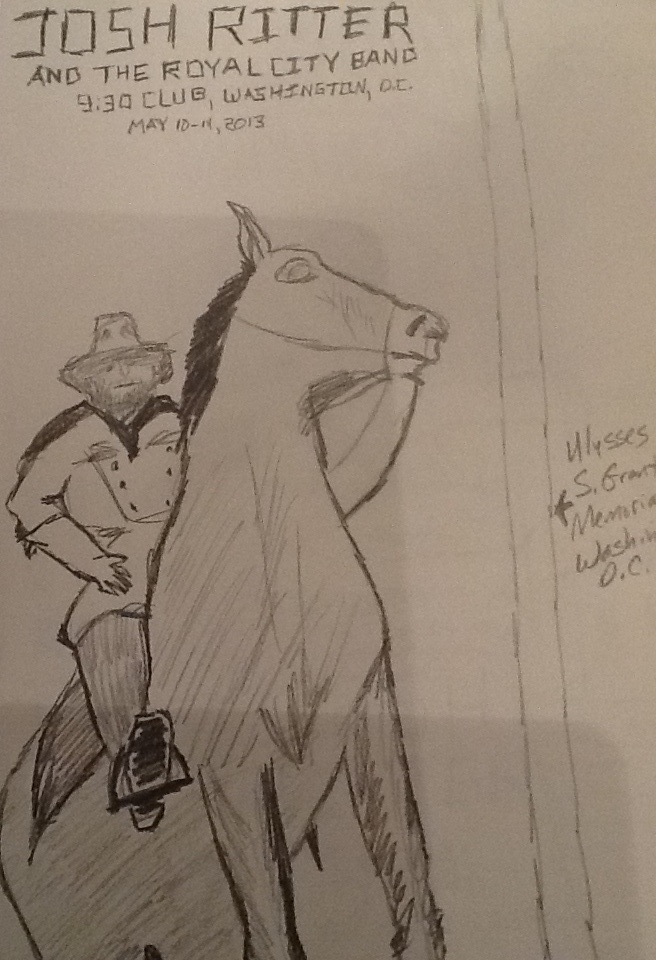 The last sketch I want to share projects an even more obvious sense of location (the Capitol), and it does include a beast (the lion sculpture on the grounds). But I'm not sure it really has much to say about the theme of Josh's album. The lion on its own might make a strong image in a text-heavy design, but as of now its my least favorite option. On the plus side, this is another image I could acquire on my own. 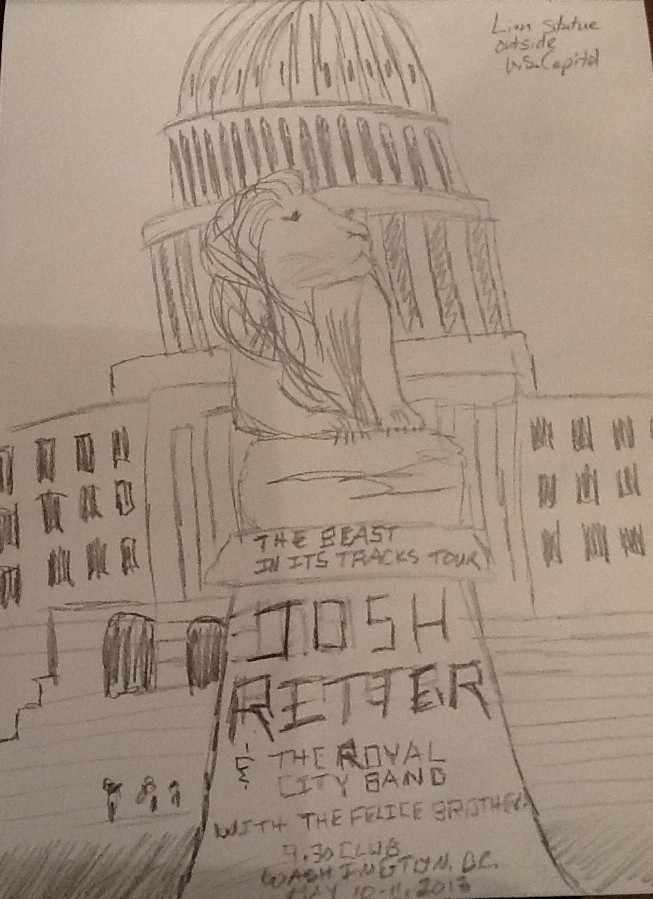