I took some characters from my notebook, and used the same palette that Victo used . I kind of wanted to stop with the flat colors but I tried a few things that she showed us. At that point I felt like I was out of control, it helped to walk away from it and come back later with new eyes. My eyes bounce all around the image, I kind of had the large character on the right as the first read and then the second red character on the  left as second and the green minions would be third. Over all it seems a little dull color wise to me. Im going to do another this time I will work out a better composition and have clearer goals to start with. Thanks for a great Tutorial.

PS: I had been following Victo's work for some time and had a file on her work. I loved her color and ironically did exactly what she described in the beginning of the tutorial with her work. I pulled  the colors and created a palette at the bottom of the image. Using the eye dropper I could see she was using gradients and some textures here and there. I used the palette from her work for my stuff and learned a lot. You can imagine how delighted I was to see this skilshare tutorial come up on instagram. And how confirming it was to know that I wasn't wasting my time picking apart my favorite artist work. 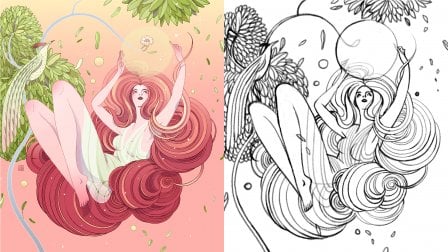