Color Mixing: Finally Getting It! (Mostly)

I am so glad that you broke out this mini class on color mixing as I knew I was going to need to go back to it as I had questions. For my mandalas in the third course, I have been mixing the secondary and tertiary colors possible from each color combination so I could see what is going to happen. I work on guessing what the neutralized colors are going to be to train my eye and my brain to “get it” even more.

So where I am at is that I have found some things that don’t seem to follow the rules. So this is a question about a new color, Quin Magenta (Daniel Smith) that I added to my palette. I started exploring mixing it with yellows. To my amazement (at first) I found I could barely get an orange out of it with any of the yellows I have, cool or warm. In the process I discovered a weird deduction that I was using that was confusing me: If the yellow and the red had more blue in it, then it would be less neutralizing. Sort of like it was going to make them more compatible. Uh, light finally dawned on marble head that having a larger portion of blue was going to do the opposite of what I was thinking. Glad I got that straightened out!

However, it left me with the question: IF the red, in this instance, has so much blue in it, it seems like there isn’t any way to get an orange that isn’t neutralized, right? Actually, I couldn’t even see the mix as neutralized, it just was never orange. I haven’t had time to go back and examine other color combos I have done to find if there is an additional clue there.

Putting a picture of my color mixing with the magenta and different reds.

I wanted to post my color palette for the first mandala in the fourth class. I have a few questions! (What else is new?)

The starred colors are the ones that I used out of the combos for the secondary candidates. The primaries are:

For the oranges, it makes no sense in terms of their position on the color wheel and what I expected to happen.

In position one of the secondaries, the orange is a WR + CY, which has one color between but is the most saturated of all four. The orange in the second position is a WR + WY which is next to one another in the wheel but is a somewhat neutralized color.

This of course, flies in the face of the “if closer together, more saturated” idea. Clearly there is something else at work here! Logically, I would say that the yellow oxide is (? Insert proper color term) not neutralized - or is it? When I think of some of the other warm yellows that are granulated they have a similar characteristic when mixing...creating a neutralized colors.

In this group the ones I would expect to be more neutralized from their position on the color wheel are the brightest. 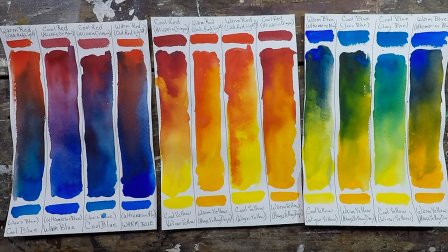