I had an idea to setup a shot of this cocktail with all the ingredients. I recalled having this drink years ago and wanted to try to make it at home so figured it was good inspo for a shoot also. Watching your class helped me plan this out.

The drink is a chilled shot of vodka (shaken in ice), served with a slice of lemon half dipped in sugar and half in espresso grounds. Not sure I fully convey that without a caption. I think I'd change this in a 2nd try to maybe include sugar cubes in the bowl and a shot of espresso in the shot as well as a shaker filled with vodka and ice but would love your thoughts on that! I turned the vodka label to the back to exclude the brand, but maybe a non-branded label that says Vodka would also be good.

I didn't draw out a storyboard of my shots but I did a mock setup and shot it on my phone first, then I setup my backgrounds and props, that evolved after seeing my iPhone shot which was super boring. :)

I shot from a few different angles which was a big take away from your class!

I started with a white tile backdrop I made from your DIY backdrop class, but with the clear shot glass, jar of ice and frosted vodka bottle everything blended into the background so I dropped in a black foam core as an alternative. The base is faux marble made with contact paper same as your class, which I'd made previously also.

Here is my BTS. It was a perfect overcast day like you mentioned in your video, otherwise I'd have had hard sunlight streaming directly through the window just to the right. 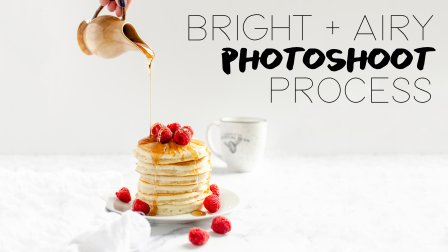 Watch Me Shoot: How to Capture Bright and Airy Pancakes
Tabitha Park