Matthew didn’t get off the school bus that day, I think he had stayed after school for football practice or some other activity he was doing. So when the bus pulled up to the stop sign on Pulaski Avenue, it was just me, my best friend Alexis, and Matthew’s friend Austin who got off the bus that day. It was a nice afternoon with clear blue skies. The trees had just started sprouting leaves again. Usually there were more than a few kids getting off of the bus at that stop sign and kids would mingle for a few minutes laughing and playing before heading home for the afternoon. This afternoon was no different. We piled off the bus onto the grassy area next to the road and it slowly pulled away, disappearing over the hill. We hung around for a few minutes, me and my friend and Austin. Like a lot of boys that age, Austin liked to pick, but I often felt like he took it too far and would get angry with him. I didn’t think his jokes were funny. I just thought he was mean.

I don’t remember what was said leading up to this or how things evolved the way they did, but at some point Austin must have thought that it would be a really fun game to start picking up the walnuts at the end of my driveway and throwing them at us as hard as he could. These large green orbs littered the ground at the end of my driveway and all along the roadside where they had rolled into the ditch. They had fallen from the black walnut trees that grew all up and down the road. Some of them were cracked and decaying while others were still perfectly round, green balls. The perfect shape and size for throwing, like a baseball.

My friend Alexis ran to the other side of the street when this started in order to avoid getting hit, but unfortunately for me, Austin was blocking the path into my driveway. I managed to dodge a few throws, but being a relentless 13 year old boy, Austin didn’t let up and managed to make contact several times to my arms and my back. Each hit stung and raised large red welts on my skin that I wouldn’t see till later when I took off my windbreaker and my shirt. At that point I had started picking up walnuts too and throwing them back at him in an effort to defend myself, but my aim wasn’t very good and none of them landed.

I was angry, but still trying to laugh things off and pretend that this was all just fun and games. Usually I found that if I pretended that I wasn’t as bothered, he would lose interest and wander off to find something else to entertain him, but I also felt the often unspoken pressure put on girls to keep the peace, make yourself more amenable so as not to provoke anything further. But this game clearly seemed like a lot of fun to Austin and he wasn’t letting up. He threw one last one that sailed through the air and hit me right in the throat, leaving me gasping for air and bringing tears to my eyes.

I had had enough at that point. After catching my breath, I realized that trying to throw walnuts back at him was not going to do any good, so I did what any logical 10 year old would do and I began to chase him.

I had always been big for my age, towering over the other kids in my class and already wearing a size 9 in adult shoes. But Austin was also very tall for his age and he was much leaner and played football. He had also been held back a grade so he was actually 3 years older than me instead of 2 like my brother. All of this meant that he was actually a decent bit bigger and faster than I was. He knew this too and zipped around me laughing and egging me on, running into our neighbor’s driveway, he turned and stood behind the hedges that lined their yard, taunting, “come and get me!” He clearly thought that I wouldn’t follow him onto our neighbor’s property. We were all familiar with the Barnette’s and they were known to be a little persnickety about loud neighborhood kids (particularly me). Typically he would have been right. I was always hesitant about doing anything that was going to get us into trouble, but at that particular moment I was fueled by anger and not willing to give into his teasing. I was tired of his relentless bullying.

So I ran after him and he turned and sprinted around the side of their house and down the hill towards the Barnette’s treehouse. His mistake was thinking that I had stopped running after him. Because I had hesitated the first time I suppose he thought I would hesitate about going further onto their property, so in thinking that he could stop and turn to taunt me some more, I was able to catch up to him just as he turned around.

I grabbed him by the collar of his shirt and jerked him to the ground, holding him down with my balled up fist at the base of his neck. I hadn’t actually thought about what I was going to do once I caught up to him, it had honestly not crossed my mind up until that exact moment. I had just been acting on impulse. But Austin actually seemed subdued with his eyes trained on the ground and I felt as though I had adequately proven my point, which was that I was not going to take his crap anymore.

I let go of his collar with one final jerk and then straightened up and very deliberately started walking away, my footsteps feeling awkward and heavy. I realized that I was shaking. I wasn’t sure though, even then, if Austin still thought all of this was a game. I wasn’t used to boys taking my reactions seriously, everything was a joke to them, and my emotions were usually the punchline. This was true for most boys my age, but even true of my Dad and other adult male relatives. It was funny to them when I was upset. It was even funnier when it was they who had made me upset.

I heard Austin’s footsteps pounding on the ground behind me way before he caught up to me, but for some reason I didn’t react. I don’t know why. I just didn’t. Maybe I felt like I had gone too far and needed to allow him to save face. You weren’t supposed to make boys feel inferior to you and I knew in that moment that I had. Or maybe I just didn’t have time to process his running feet behind me, I had never been in a fight before so I don’t even know what I would have done. Or maybe I just froze, unable to acknowledge the point to which this situation had escalated. I felt him come up behind me and grab my arm, using his momentum he flung me around in a circle and threw me with all his might into the Barnette’s hedges.

I lay there stunned for a minute. The hedges, although stabbing me at various angles with branches, had acted as a sort of a pillow, bouncing me back halfway onto my feet. I clambered out of the bush altogether intact, with mainly just a bruised ego and, as calmly as I could muster, marched away, keeping my eyes focused firmly on the ground. I refused to make eye contact with Austin, who stood there motionless, silently heaving, his gaze following me. I kept my eyes on the ground the whole way home, not knowing if he was behind me. My friend Alexis, who had watched the entire 5 minute ordeal unfold stood flabbergasted on the other side of the road, unsure of what to do. I grabbed my bookbag from the bus stop and marched all the way up my driveway and through my front door, not allowing myself to cry until it was firmly shut behind me. 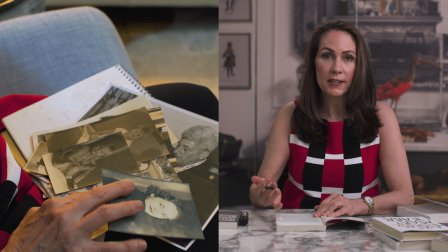 Writing The Truth: How to Start Writing Your Memoir
Mary Karr