I first want to say that this class was great! It really helped me with body proportions and it was fun to play around with different shapes and sizes for my characters.

My idea for my characters is a circus made up of figures and animals from a wide range of mythologies and folklore that have their origins from different parts of the world. A circus with dragons, flying horses, mermaids, fairies, you name it! I unfortunately was unable to draw out every single character from my mythological circus in time, but I am happy with what I have come up with so far.


The heads of the characters

This is Alabaster, the Ringmaster
I wanted to make a ringmaster that deviated from the typical portrayal. I was originally going to make him a magician but I thought about how ironic it would be to have a circus leader be an animal when it's usually humans that control the animals within the circus.

She is an arial dancer. She starts out as just a lady when she transforms into a butterfly before the your eyes! Her wings are made of glass that shine with a colorful glimmer.

Clarina
She's a porcelain clown doll come to life! The cracks on her face indicate advanced age yet her beauty remains.

The Selkie Sisters: Fiona and Faline

Selkies are seal women from Scottish mythology that can transform from seals into humans by shedding their seal skin. I first started with Fiona (Left) but then later thought that she should have a sister to perform with. They act as both Trapeze artists while human and synchronized swimmers in seal form.

And here are the character sizes and silhouettes!

And here's the body proportion exercise 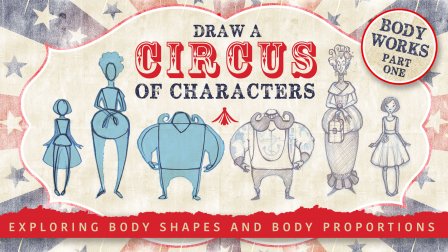