Thank you Jessica for this class! I changed up a few things in my project; I thought it needed a little perspective from the right side, so I made the left logs shorter, not sure I understood the sketch. Also, not sure it's really visible.

I chose vermilion for the house instead of red, but not sure about that. The red would have been better after all. I also painted the door brown, like wood, since you said that was your initial plan. ;-) And I liked that idea.

I added a chimney, like one of the other students, I thought it added something to the whole thing. Then I added stones in the chimney and the pillars.

I chose to not let it snow, as it is clear enough to see the sky and stars. And in the end, I missed the Christmas trees! When I saw that, I was already done, so I will leave it as is. 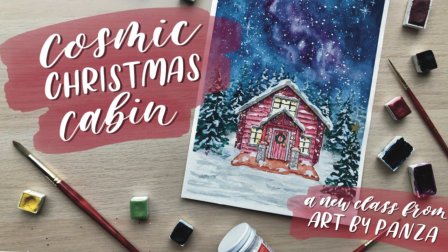