Trying to work out the bg and what feel to go with. Quite short on time, but I guess the good thing is I have until late April to finish and print this one.

I think that could be almost it! - Added the 'burst, a central glow behind the city, a white border and the date banner. I'll still work towards my own text for the bottom title, but this looks good for now.

It's changed a fair bit from the initial sketches, and it'll probably change a bit more before print, but I'm quite happy with the direction it's taken and I think it'll work quite well between a print + t-shirt.

Lemme know what you reckon! 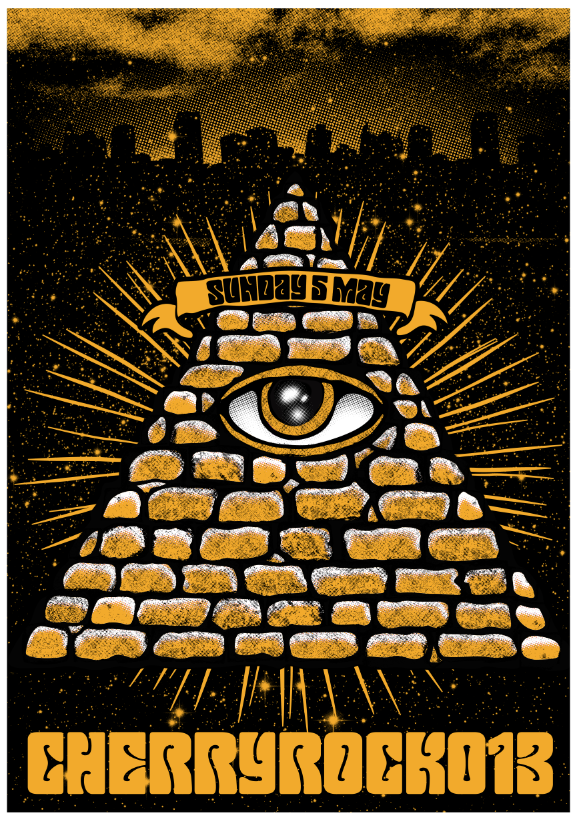 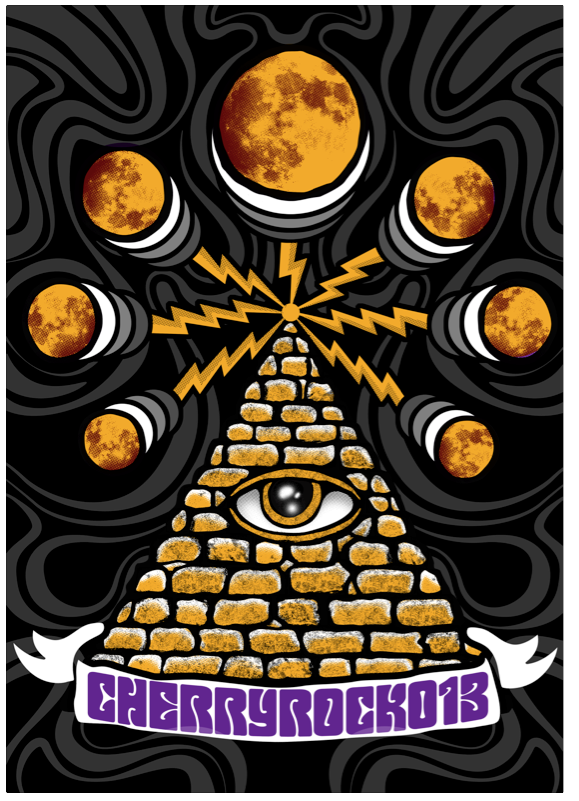 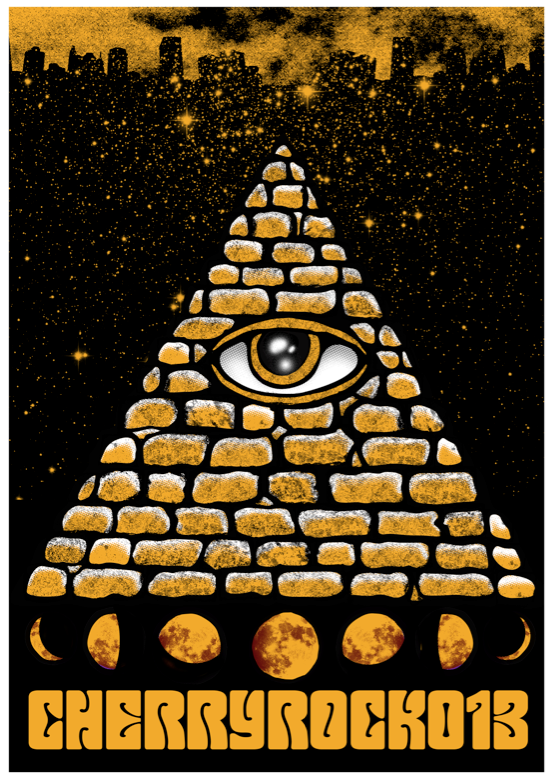 CherryRock013 is a one-day street rock n' roll festival held in AC/DC Lane, Melbourne, now in it's 7th year. 14 bands play over 2 stages from 12noon till 9:30pm. It's organised and run by the Cherry Bar, whom I design FT for.

The cover image above is the main promotional artwork I've created for the festival. This is typography based to allow all the band names, information and festival details to be included on the poster. The screenprint I'll be completing through this class will be image based and only include the festival name, date and location.

The screenprint I'll be creating will also be turned into a t-shirt print, so the desgn will have to work well across both mediums.

This is the first poster screenprint I'll be doing, and I'm looking forward to your feedback, tips, ideas & constructive criticism!

The 2 headline bands are big stoner rock bands (UNIDA from California + Truckfighters from Sweden) so the imagery will be adding stoner / psychadelic elements to a strong rock n' roll base. The crowd demographic will be 20-40yrs old, 60% male - 40% female, heavy drinkers, classic pub-rock scene fans.

I've been playing a lot with space elements; the moon cycle, planets, stars as well as strong geometric shapes, the all-seeing-eye image, and of course, skulls :)

Some thumbnail sketchss to start with, then a couple of refined versions. (as above) Scan in, and use a mixture of Illustrator and Photoshop. Most like solid vector shapes with realistic photoshop textures. 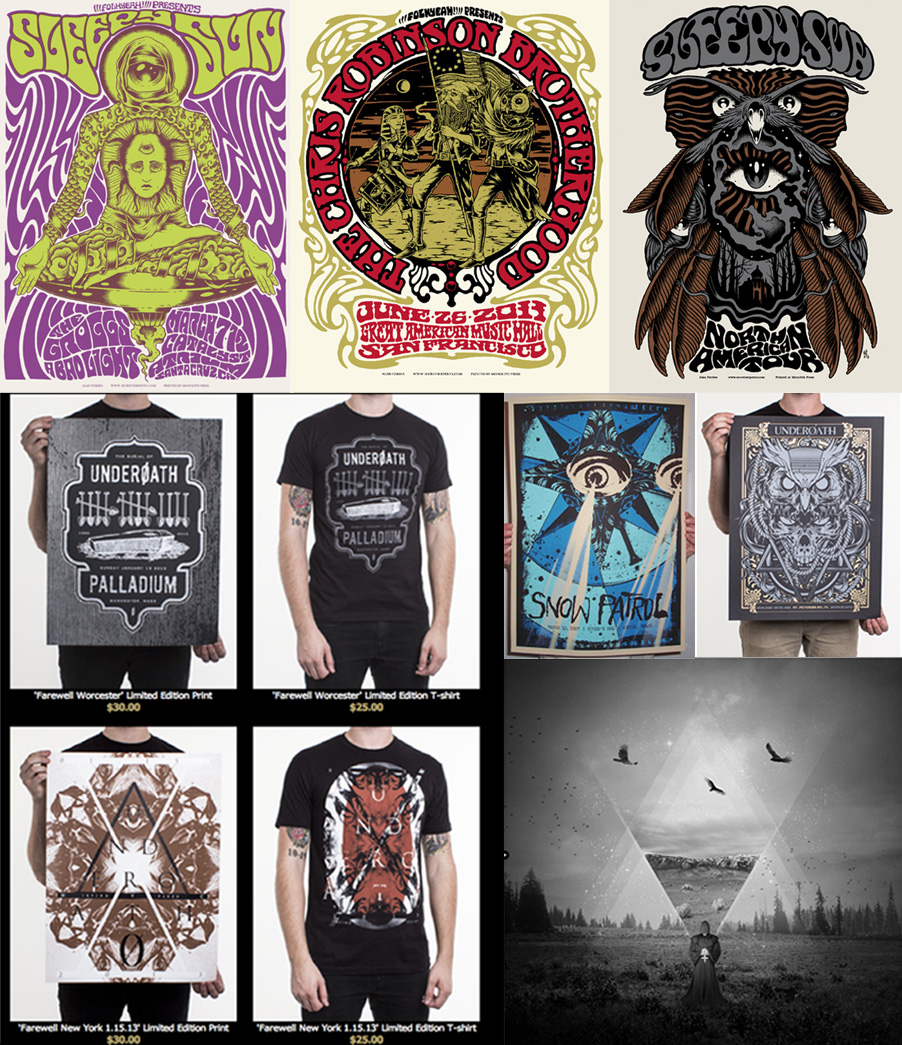 I've attached 4 below, and whilst there's only 2 I'm really deciding between, I'd love your feedback or preference on all 4. After drawing my preferred option from above (the dead centre one) I realised that a simpler execution/idea would work best.

1st - Simple, iconic imagery with the planets/moons added to give a little more stoner/psych feel. As the festival is held in a laneway in the city, I think I'll draw the pyramid bricks as cobblestones to help bring across that location feel. Most likely a space/stars bg, and some Alan Forbes psych lettering.

2nd - Central imagery with that realistic, spacey overuse of triangle effect. This one will have more realistic elements + textures, but I'll still keep with the psych lettering.

3rd - Favourite from the first lot of sketches, but didn't transfer as well as I hoped. I still dig it and might add more, but I'm not completely sold...

4th - More of an illustrated sun/planets image. This would be purely vector with textures. Might be too happy + bright for some of the heavier rock/stoner bands + the audience. I'll most likely use this design as a t-shirt print for a friend's band that's on the festival, Matt Sonic & The High Times... 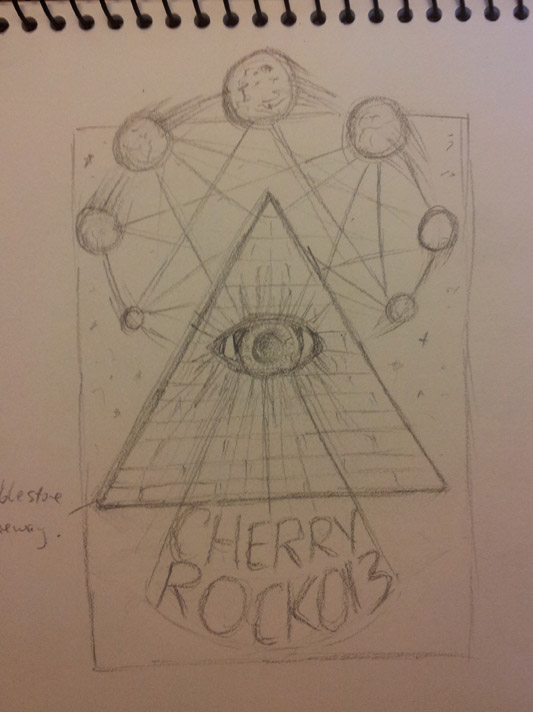 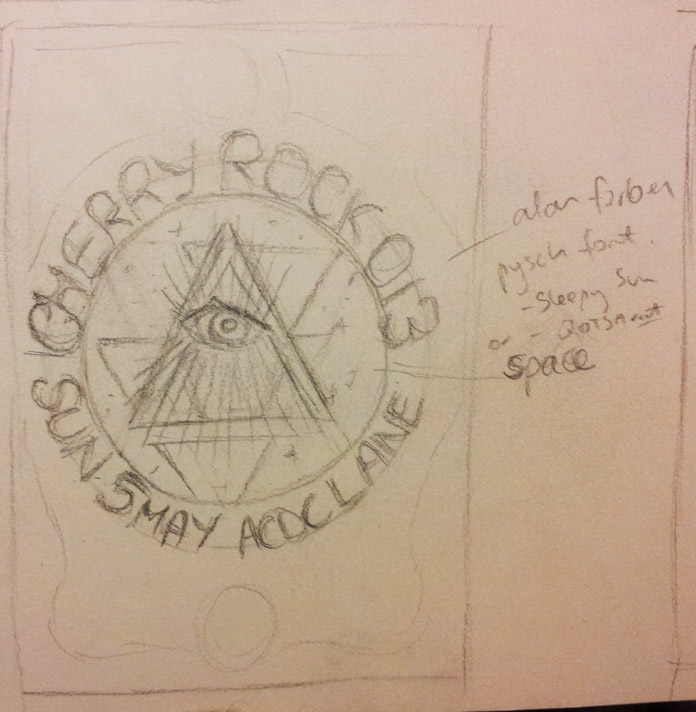 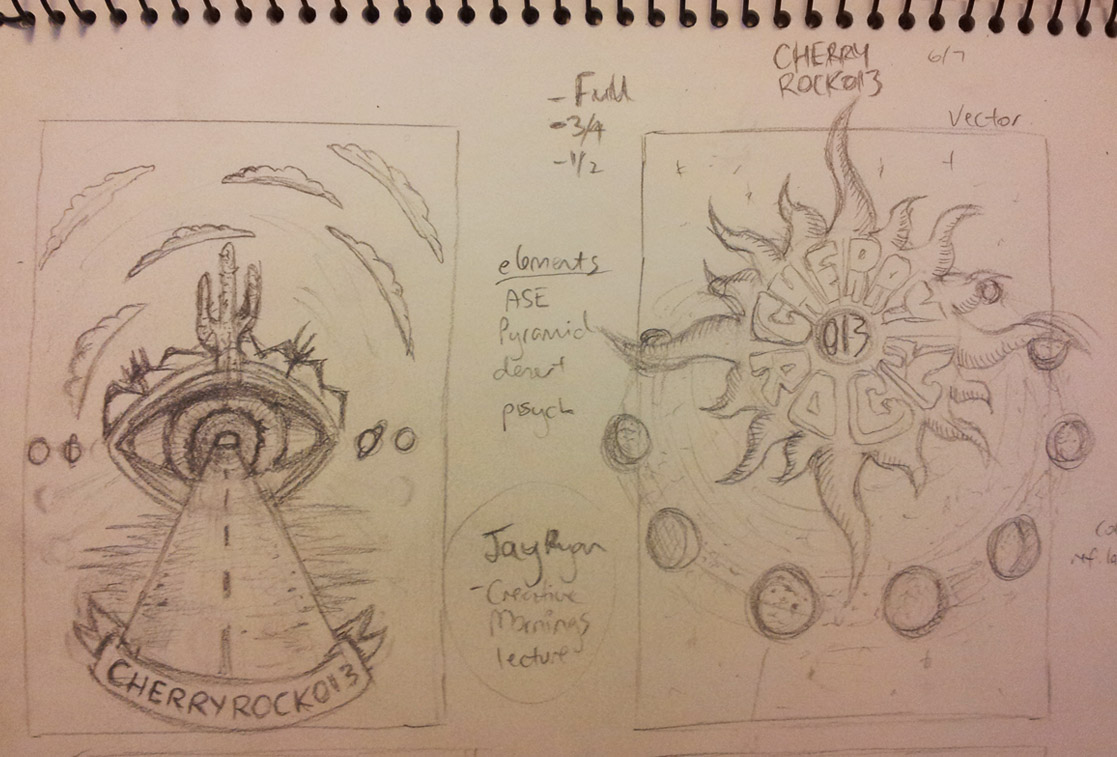 Notes - Pyramid needs to be bigger and most focal point. Might change electricity to straight lines...most of desert and background with be silhouetted. Need to finalise lettering, but that's usually one of the last step as this design will change a lot once I scan it in. 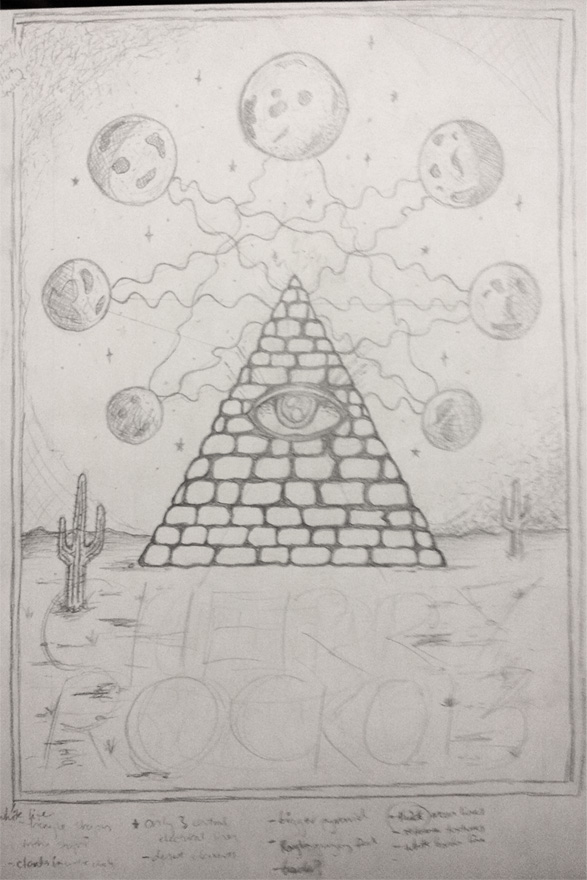 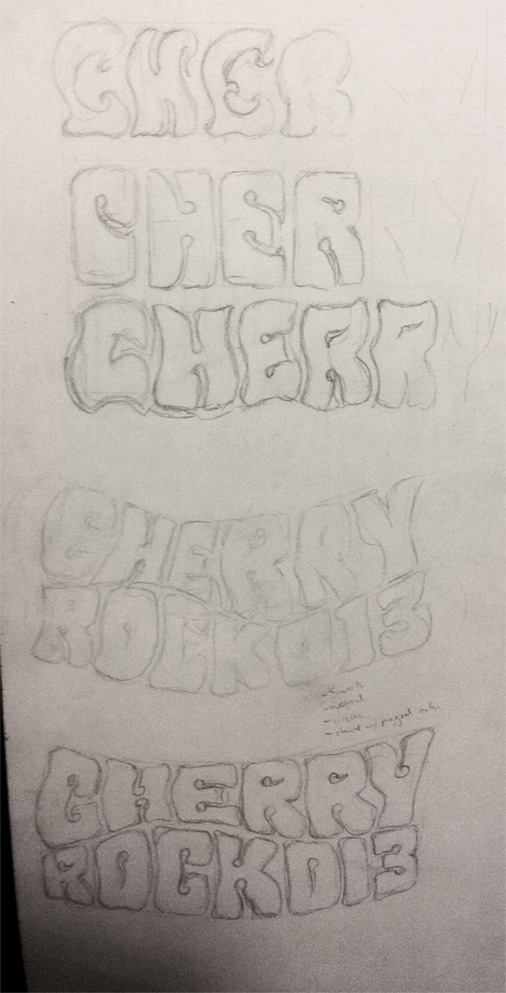 Some more relevant reference imagery. I'll use the dark textured based elements as the overall feel. 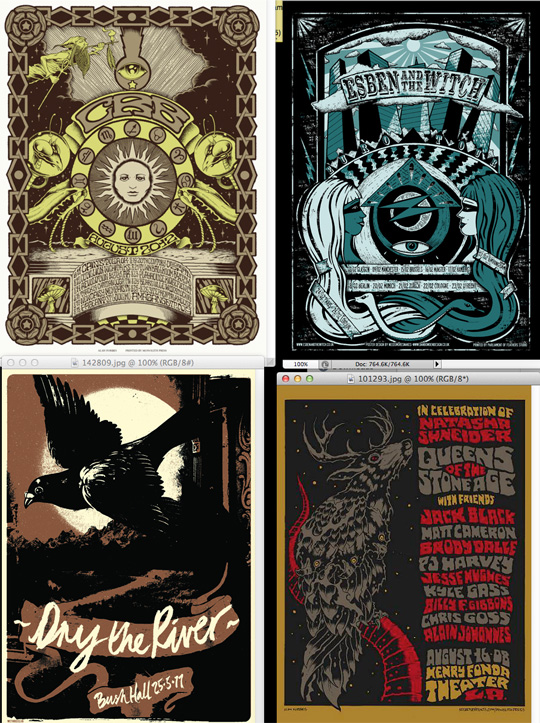 Starting to illustrate parts. Scan for reference. Once each part is vectored, I'll start adding the textures to give that realist feel. I'll add progress shots as often as possible.... 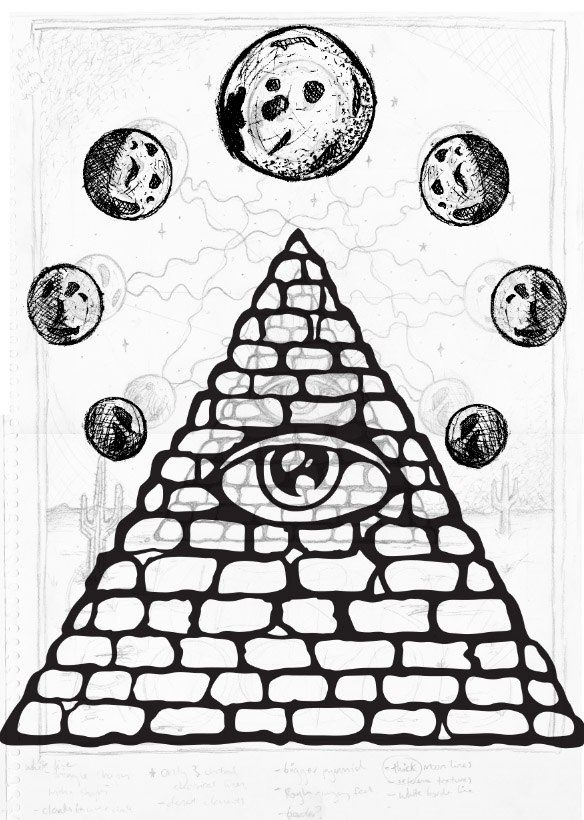 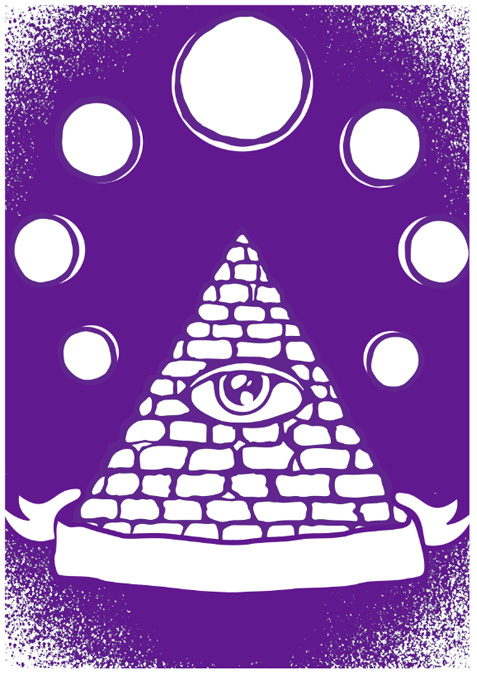 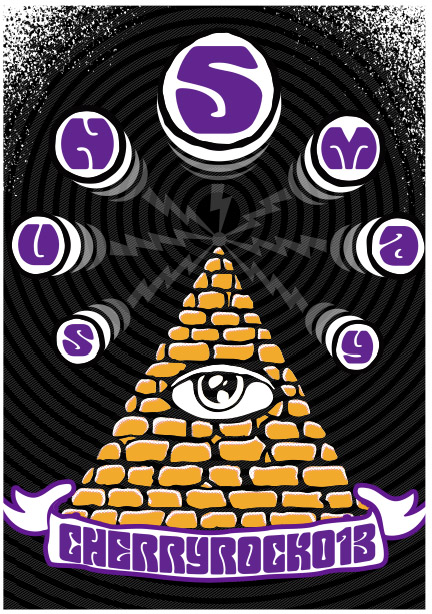 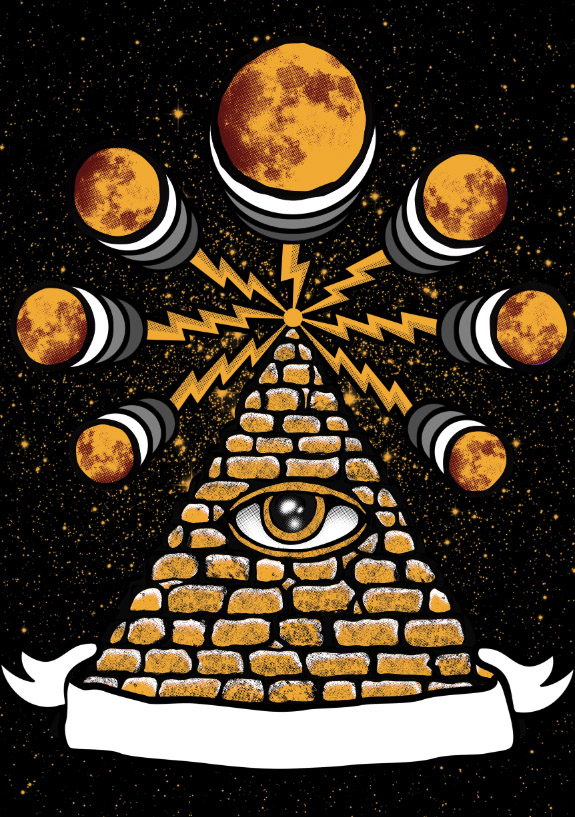 Purple: Still have no idea where this is going... I'll hopefully have some time this weekend to put in some solid hours...textures still to come!
Black: Adding some placeholder elements in...still looking to finalise the overall layout and imagery before I move onto cleaning everything up. Moon circles say the date - Sun 5 May.....this is why I don't like showing my work until it's complete!!!
Black 2: Pyramid textures added in....going to turn the moons in the different cycles, play around with some psychedelic lines, and start finalising the bolts/centre piece. I'm gettinga better idea of where this is heading, I'm just still not happy with it!