So I ran the last design by some of my nearest and dearest and i think the conclusion is that the company concept is a little too forced. "moustech"? Who cares! So I'm back to the drawing board with a concept that needs less back story to be attractive. I think the cat/mouse combo is compelling enough on its own but, blargh, again, still feel like it's lacking something. Maybe it's just my lack of illustration skills holding me back. 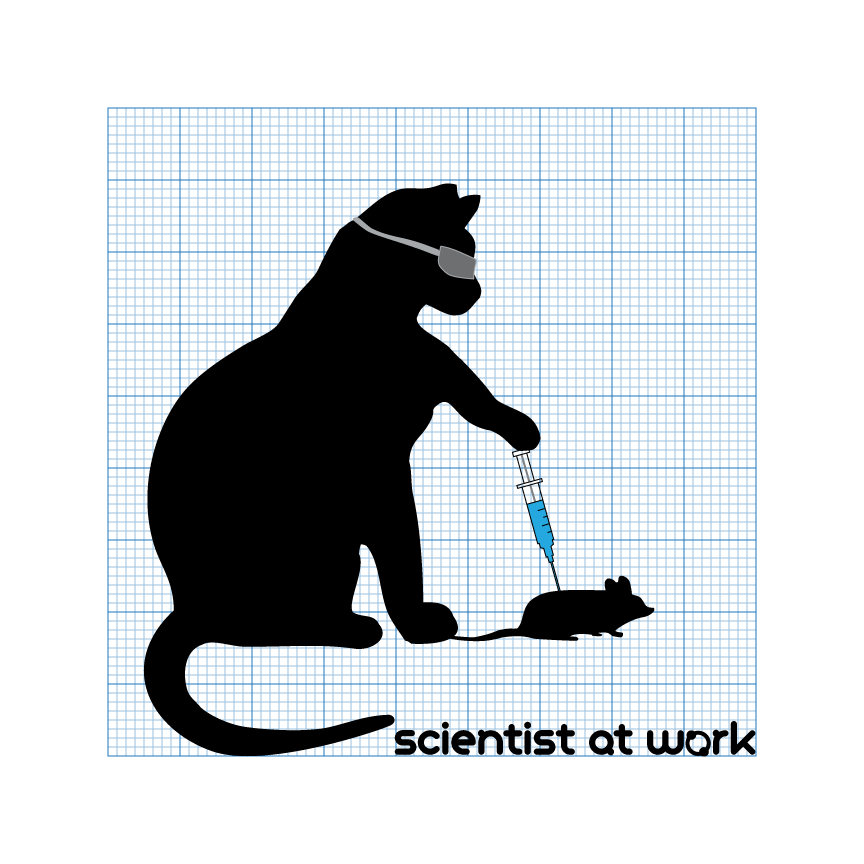 I retained the molecular "O" but otherwise ditched the company theme. I like the idea of using graph paper as an element, but it feels just a little too simplistic as I'm using it here. I'd really love some instructor feedback on, well, anything (branding concept, execution, whatever). 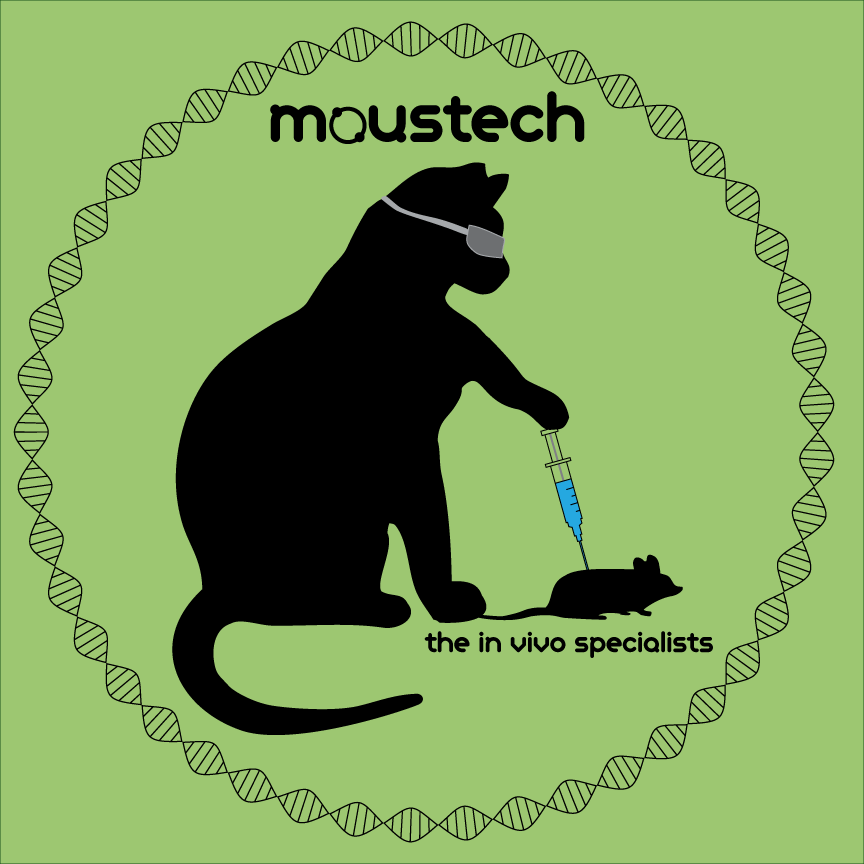 Still feels like it needs more/less. Blagh. Need feedback instead of living in my own head.

After pages of horrendeous ink sketches, I'm finally back to the cat scientist concept. As I mentioned before, I feel like the design is missing something and I'd like to flesh out the concept. So, I thought, where would a cat be doing mousework? At a biotech company? Being in the SF bay area I'm surrounded by biotechs, but sadly, their design history is not nearly as rich as the old timey-magician posters and clothing brands that Chris talks about in his lectures. Where do I go for reference material then? I'm open to suggestions...

Anyway, I threw together this: 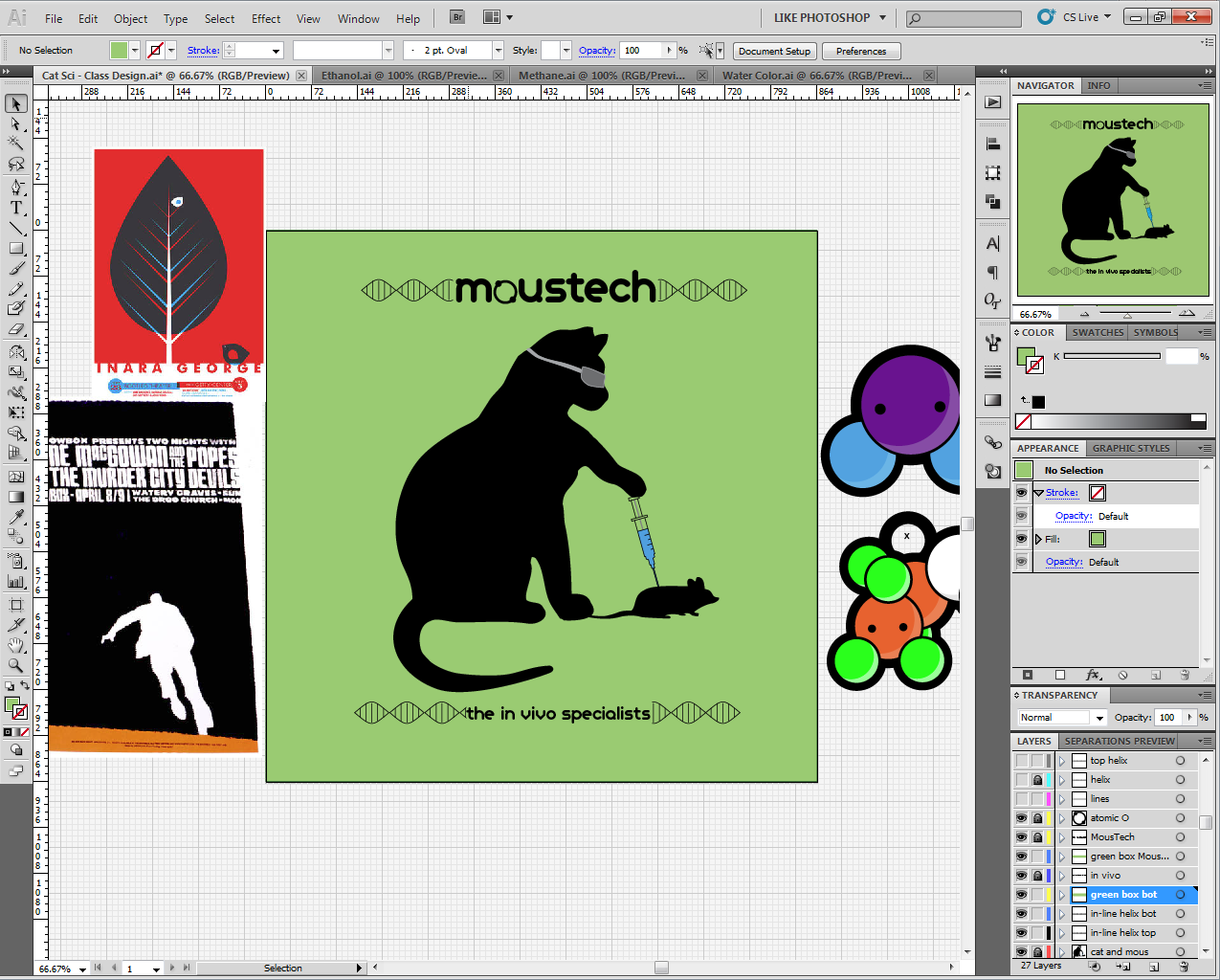 The posters on the left were inspirations but clearly the typography isn't quite there yet. I used a typeface that I found on fontsquirrel.com (supposedly 100% free for commercial use) and threw in a modified "O" using the classic 2d representation of a double electron molecule.

Flow. I don't really like the flow at the moment; it's a bit too stodgy with the perfectly rectangular feel, I think. Maybe I can play with the DNA strands a bit to make them curve and direct the eye a bit more?

Aesthetic. I really like the flat design aesthetic used in recent years for mobile and internet UI interfaces, so I'm trying to keep the design mainly flat. I would like to add some depth, however, via highlights perhaps (similar to the molecules off to the right)? Or embossing (like the apple logo)? Any other ideas for making the design more visually interesting?

I'm not at the sketching stage yet but I'm brainstorming new ideas for shirts at the moment. I may try to update the cat scientist shirt somehow once I come up with some appropriate techniques, but anyhow, this is what I'm thinking now:

I love listening the to the Radiolab podcast series, which are generally very sciencey. They highlight a lot of interesting stories and I was thinking about drawing my inspiration from one of them...There's a couple of really cool episodes that I'm thinking about, e.g. "Stochasticity" (i.e. randomness), "(So-Called) Life" and "Diagnosis" (flowcharts?).

I love doing science projects that you can do at home; since I'm not a real scientist like my wife I have to satisfy myself with things like "Poop Splash Elimination"--which is a very practical and useful technique to know, incidentally. Maybe the cat is pooping...scientifically? Ok I need to work on this one a lot.

Did you know that ions (atoms or molecules in which the total number of electrons is not equal to the total number of protons, giving the atom a net positive or negative electrical charge) with a net negative charge is called a cation? Ok, so this shirt idea is a pun. Cat-ions. Get it?

Finally, I'm trying to think of a shirt concept that builds on the plush molecule side of the business--as suggested by John DeNapoli. Maybe an illustrated, cool looking molecule of some sort? There's a ton of these shirts out there already, actually, so I need something to take it to the next level...

Hi. I'm a corporate attorney by trade, a philosopher and writer by education, and a graphic designer in my free time. Notwithstanding my lengthy career in the liberal arts, I am the spawn of two physics Phd's, and brother to a biomedical engineer. I also managed to finangle my way into marriage with a molecular and cancer cell biologist. Science, I think it's fair to say, has always been a big part of my life. 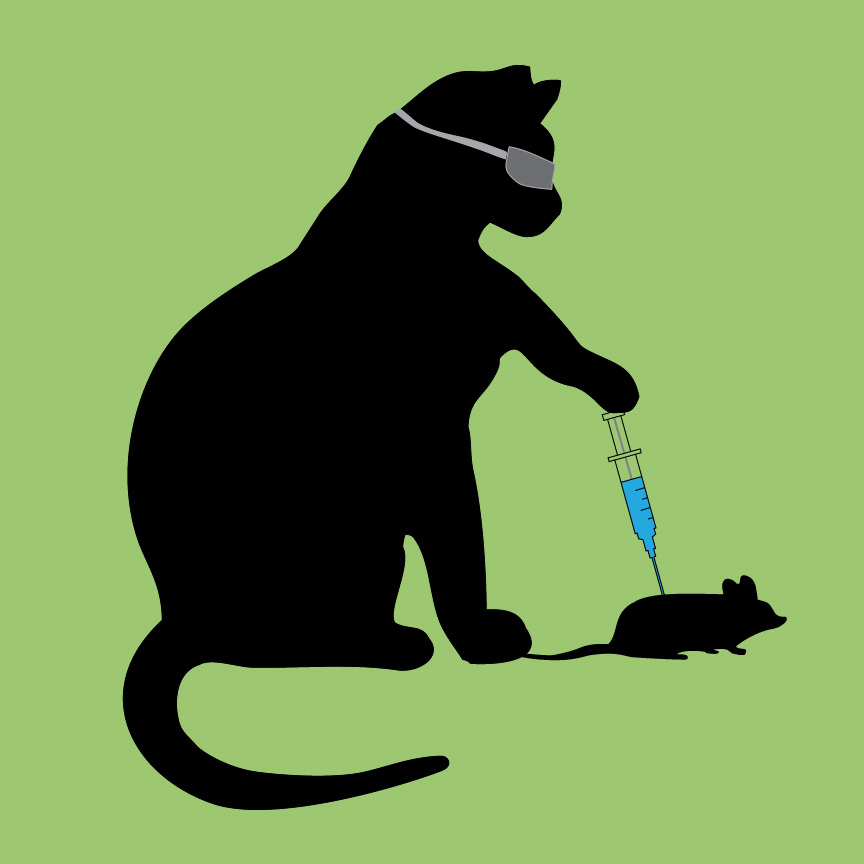 Over the past couple of years, my wife and I have been working on developing a small business selling science-related artwork. It's called Prim and Plush. We've exhibited at musuems and sold at craft fairs, including the Renegade Craft fair in Chicago. When we got into that one, we figured that we needed some more....mass-produced goods to sell alongside the painstakingly handcrafted molecules. Enter me, the lawyer-turned half-assed graphic designer. 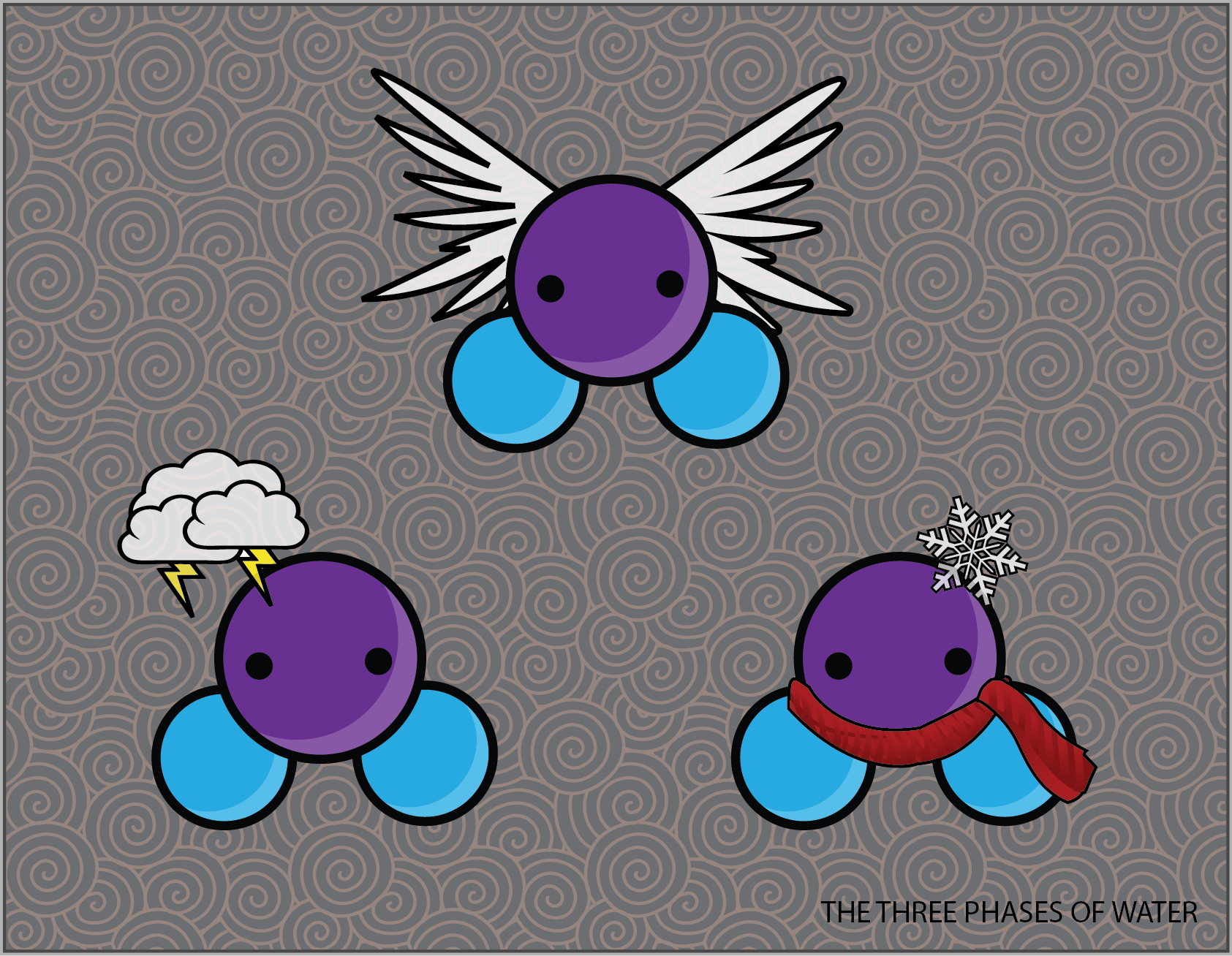 (This is a postcard. That background probably wouldn't work on a shirt...)

So I put together some t-shirts, postcards and keychains...some people bought them, some people loved them, some people didn't. Regardless, I caught the bug and I'm now trying to create a separate brand for printed works along the same lines--in a nutshell, prints for scientists and people who love science.

Scientists aren't your typical t-shirt consumers, I think, and I've found that they don't often wear image tees. I know, great choice of audience there, Dennis. But they're the kind of people I know and love and I think if the designs can be simple/subtle/intelligent/fun, sciency people will want them. 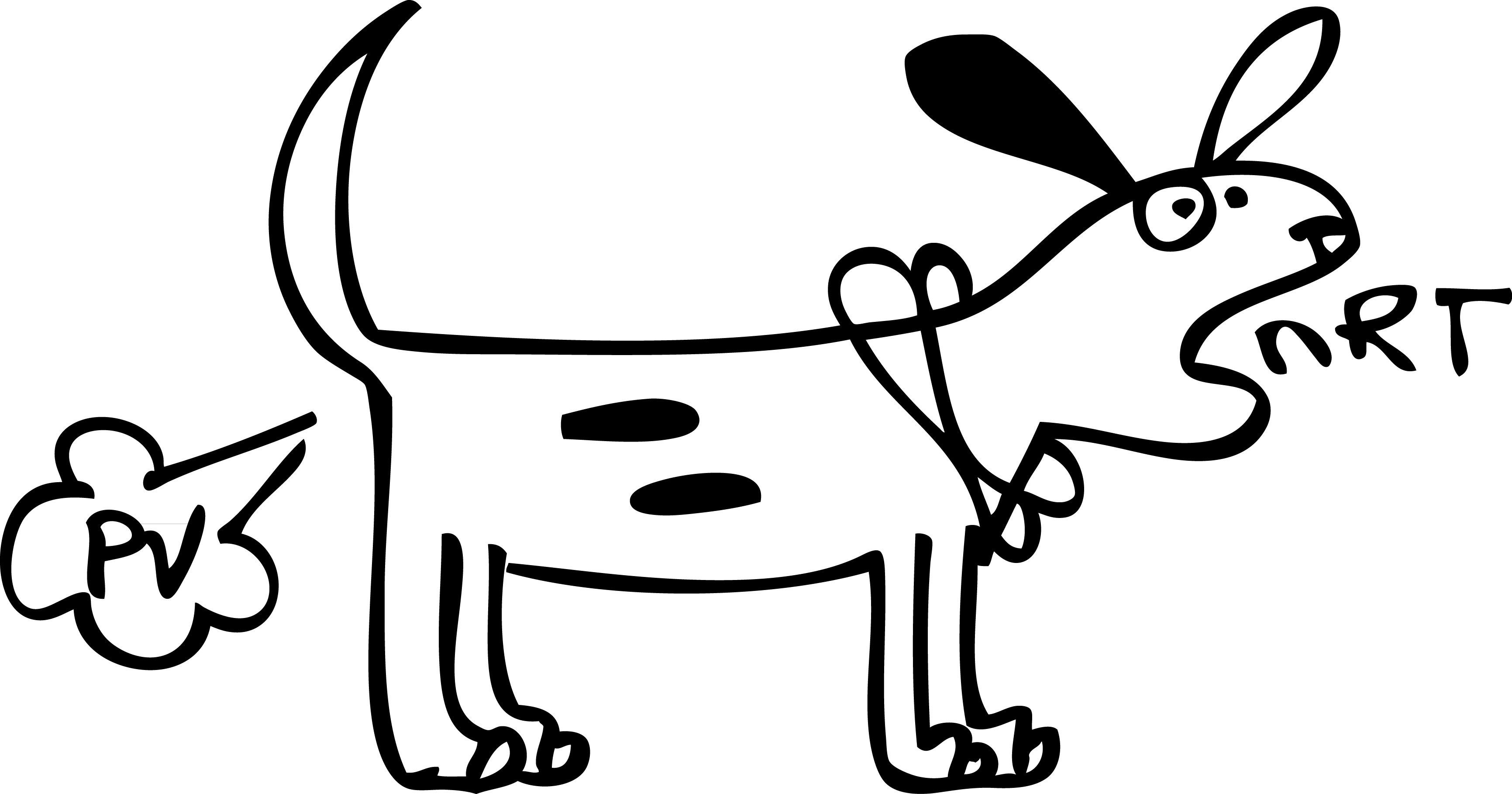 They don't have to be too intelligent. This is the natural gas law dog, in case you're wondering: PV = nRT.

I don't know much about graphic design, and I'm a terrible illustrator. But I hope to learn more about incorporating typography into my designs and maybe some other techniques which don't require as much skill in the freehand art department.