I've chosen to do a conceptual poster for New Zealand artist Kimbra, best known (at the moment) for supporting vocals in Gotye's "Somebody That I Used To Know". Kimbra's a very quirky character onstage and in her music, but also very elegant and graceful, which are all qualities I hope to evoke with the poster. Much of my inspiration for this poster will come from two of her music videos, "Settle Down" and "Good Intent".

^ Awesomeness embodied! Go watch all of her live stuff, it's kickass. :D

Done to satisfaction! I took a few suggestions down below and ran with them, surprisingly to a place that I really liked. I'm posting my favorite two because, well, they are my favorites. To choose just one I would have to select Kimbra in blue. I think it's pretty elegant and right within the style specs that I was shooting for when this started. The second one attracts me visually and was a lot of fun to play with in regard to color, but the type is a little finky to me still. I may play with it more before I explore printing it. 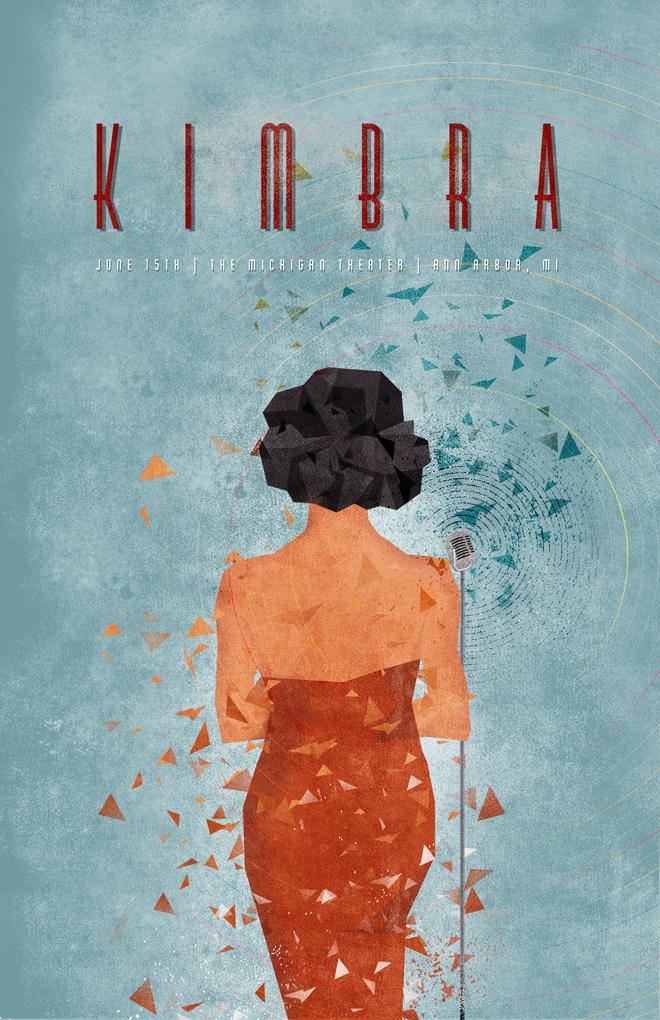 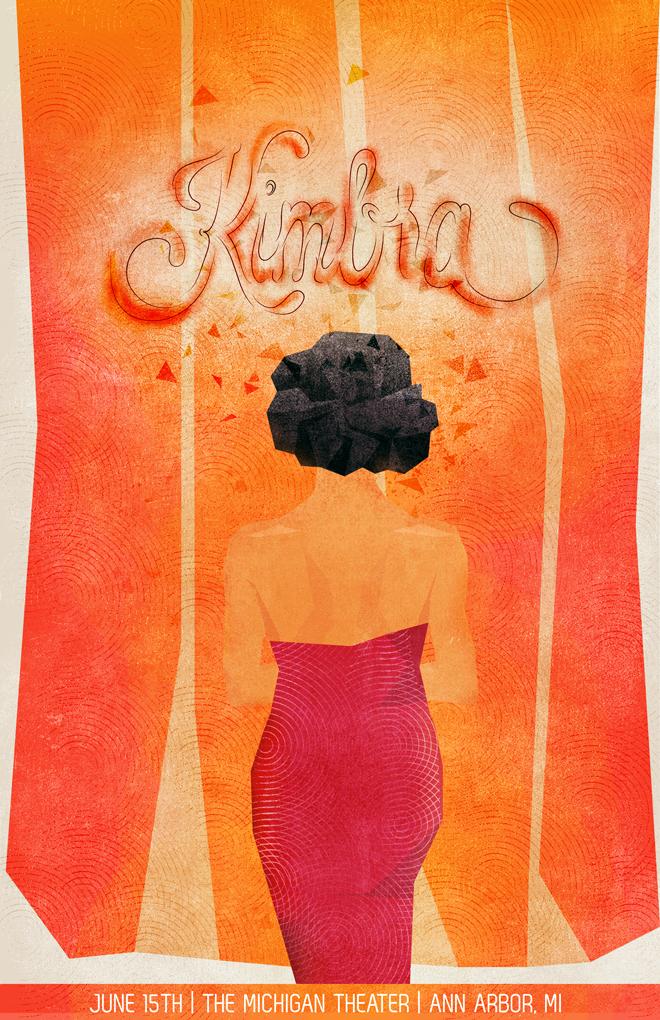 What a cool class! Thanks DKNG for hosting this and providing such excellent resources for up & comers such as myself. It's been very helpful and inspiring. Thanks to everyone to shot back commentary and suggestions. I tend to work in a bubble, so it was nice to get out of that and experience actual constructive and helpful feedback from my peers.

Since this class, as well as my real life classwork that I've been engaged in, I've started doing more illustrations based on original sketchwork, which is a bit new for me. If you're so inclined, you can follow me over at my Dribbble or check out more of my work at mt website and blog.

New comps which are closer to a final product. I realize that it's early-ish, but I feel like I'm pretty close to finalizing my poster. The styling is very simple, so I think all I really have left is to maybe tweak the coloring/texturing and fiddle with the type some more. The last one is my personal favorite. What do you guys think, anything that comes to mind? 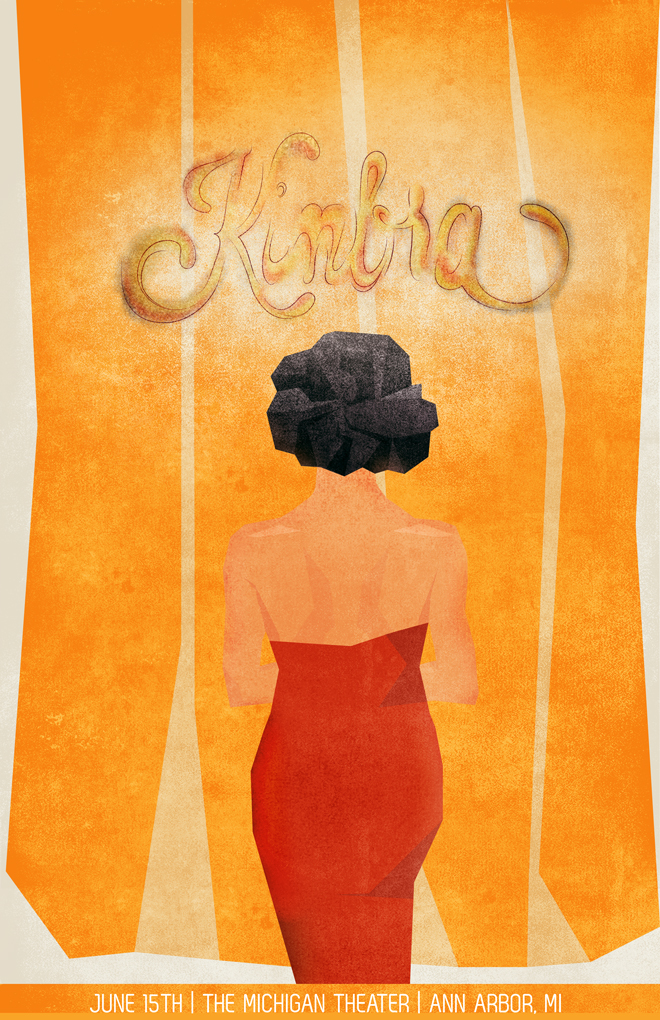 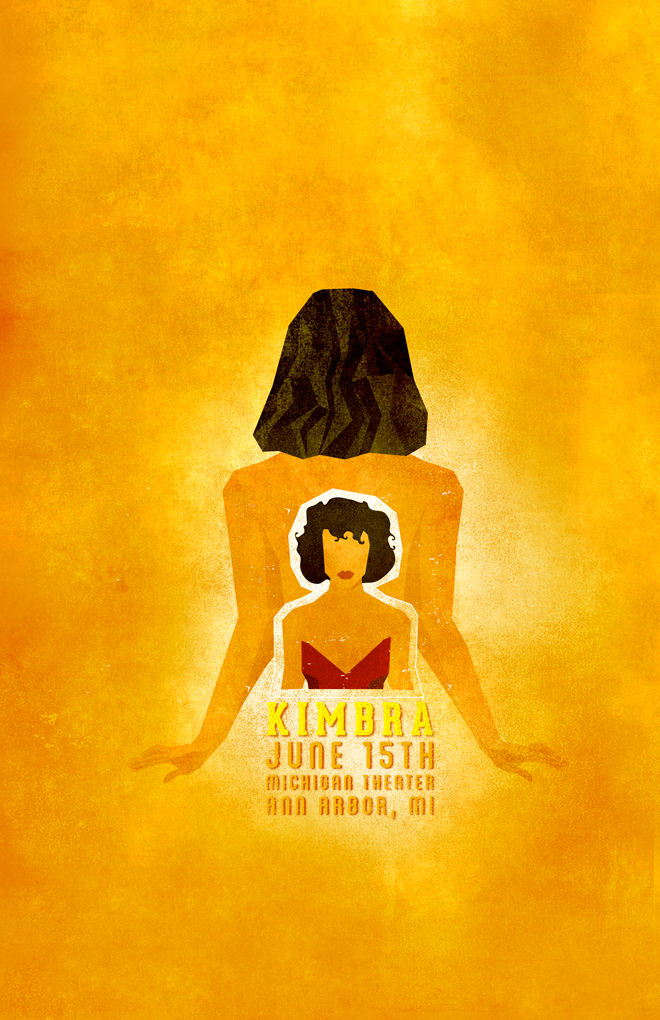 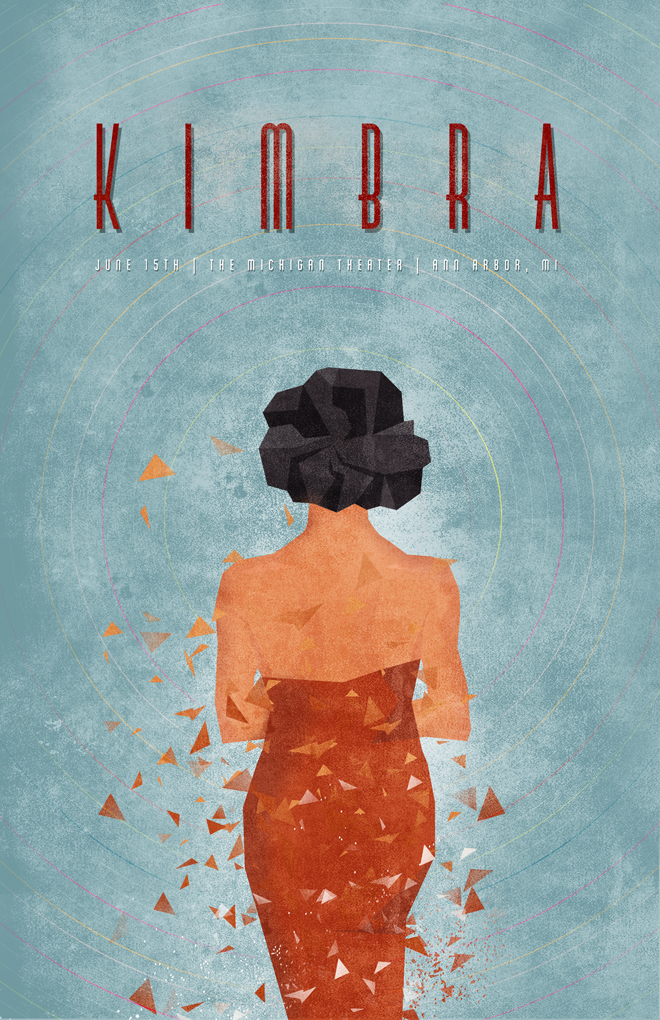 These are the four comps I'm currently playing with. A classmate suggested encorperating the type as part of her dress, which I liked and tried out. Still working with it to make it a bit more unified. The type right now is a little *too* Saul Bassy so that will end up looking different too hopefully.

A bit of my recent progress. I'm playing with textures and acheiving a grungy -- but not TOO grungy -- effect on the overall artwork. I have some of my own special vector spackle thrown on this first one to give Kimbra som edge. Might work more with it, might not.

Also working on some hand drawn lettering so it's not just LostType typefaces on everything, as is typical of me. I'm leaning towards a light sans serif type look for her name. But I'm currently trying a serif look too. 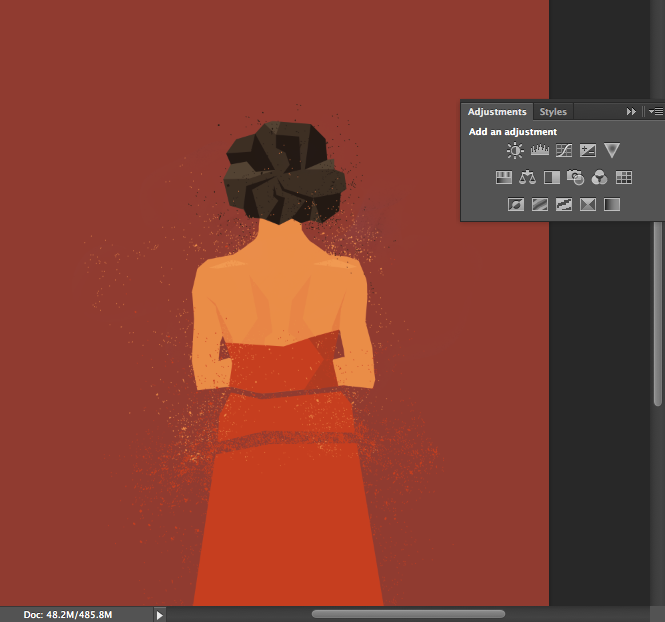 This composition is still my favorite so far...I keep coming back to it. 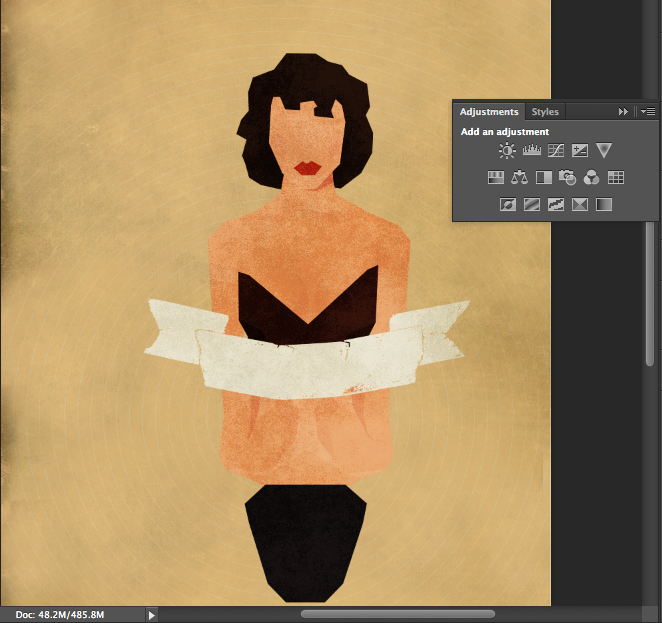 This is another idea I had to make Kimbra's various characters into little Matryoshka dolls. I feel like it's cute, but we'll see if it goes anywhere. 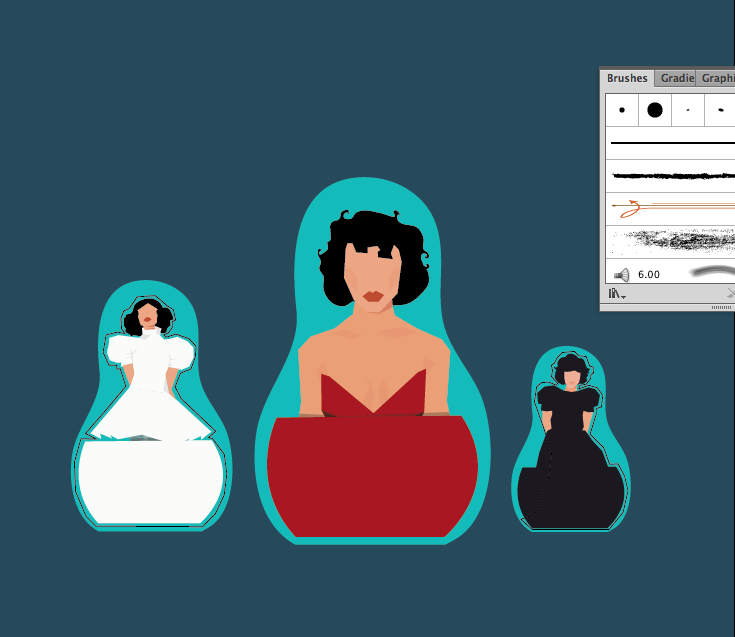 My sad attempts at vectorising hand lettering. Not gonna use this, but I liked how the texturizing came out. 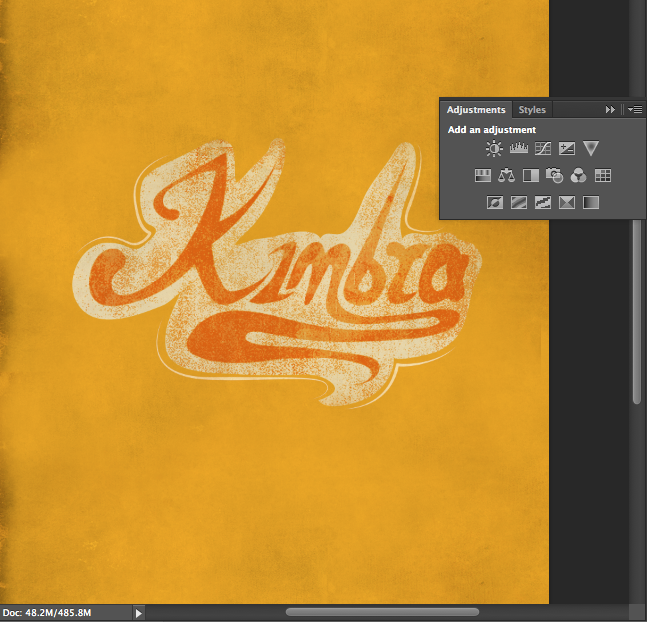 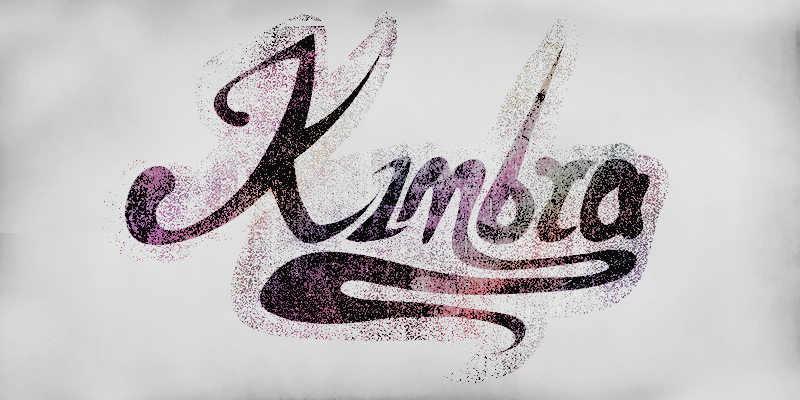 My pitiful sketch of a potential heading/logo mark kind of thing. 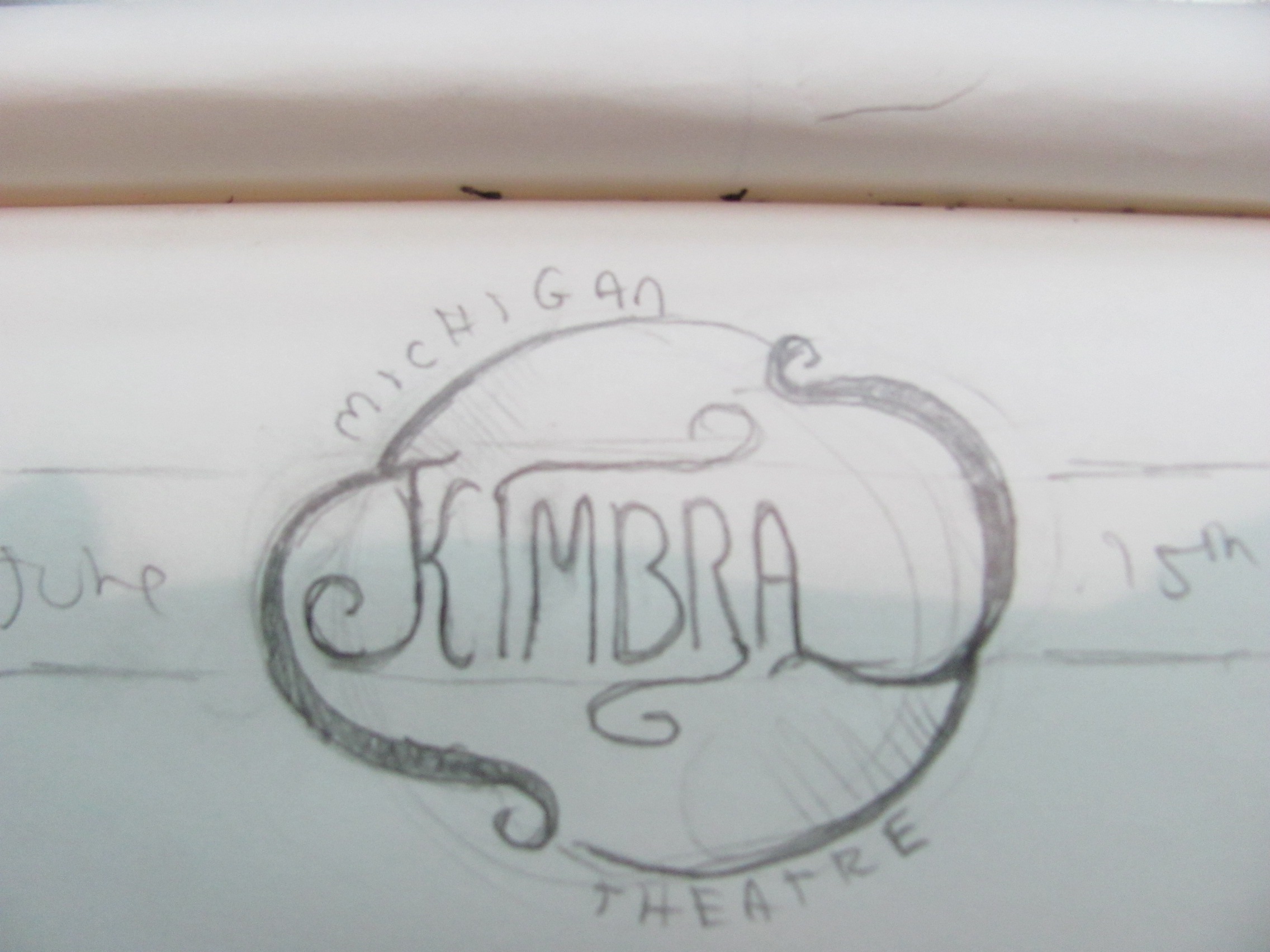 That serify type thing I mentioned. Inking this now. Not sure yet! 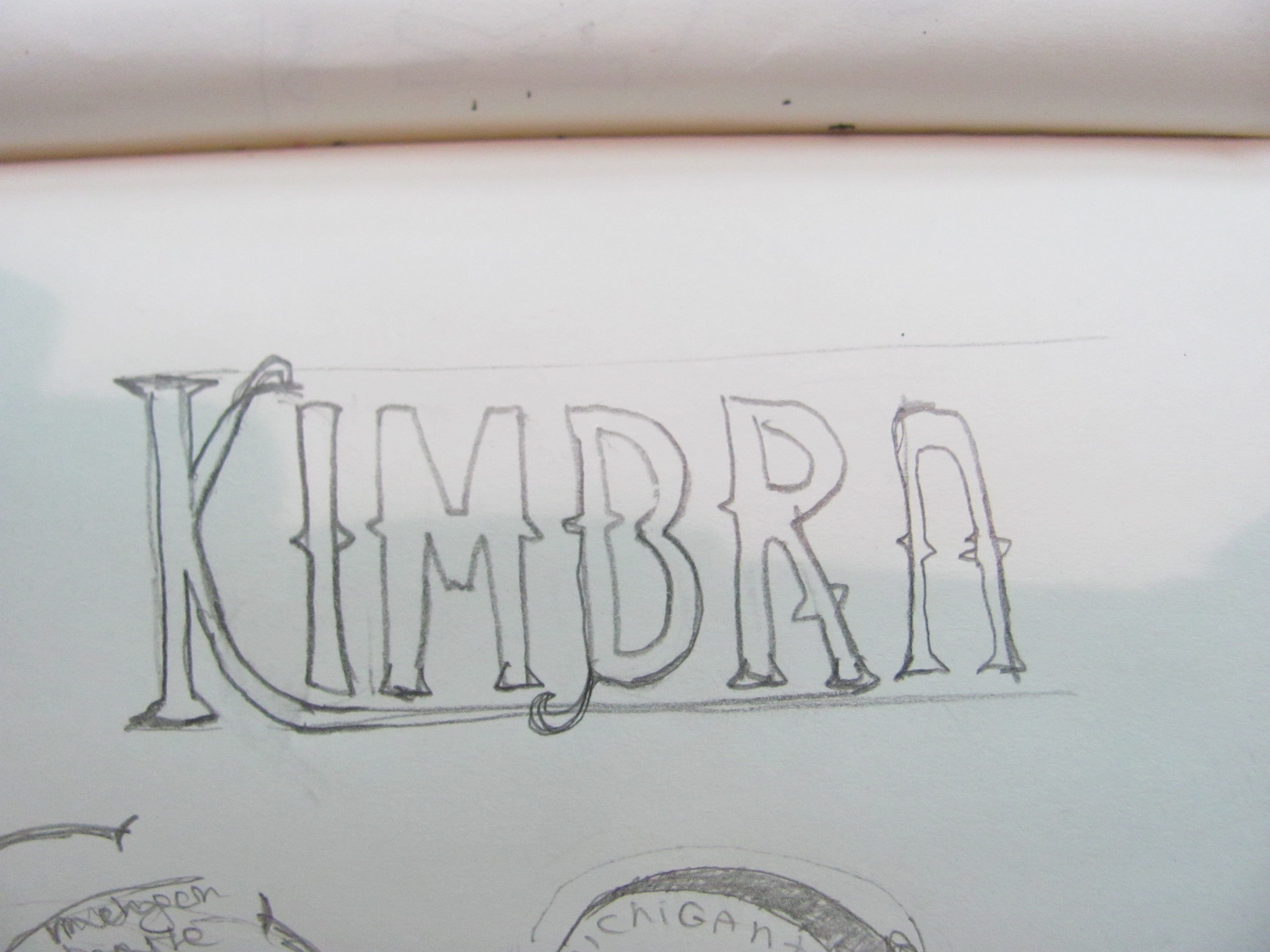 In "Settle Down"'s Norman Rockwellian world, there is a prominence of pastel colors, 50ies era wallpaper patterns, and under the surface, a certain sinister domesticity. In this iteration of Kimbra's musical character, she is innocent, coquettish and startling. In her other video for "Good Intent", Kimbra envisions herself as a noir femme fatale, completely grown-up, suave, elegant and slightly dangerous.

I'd like my poster for her conceptual '13 tour of the US to reflect the dichotomies between these two characters, and hopefully represent Kimbra as what she is to a potential audience -- ultimately, what she intrinsically is and has a lot of fun being: a character with a soulful heart.

Below are a few of (super crappy because I suck at thumbnailing) sketches I've been working on. I'll have better looking stuff soon. All my ideas so far are pretty symmetrical and simple, as is typical of my postering style. Because I like to break down complex figures or characters into simple shapes or iconic objects. I might play with breaking Kimbra herself down to something iconically "Kimbra", such as her poofy skirts that she likes to wear, her shoulder lenghth black hair w/bangs, or I may even attempt drawing hands and have her hands -- which are very emotive during her live performances -- reaching out towards the audience from the poster. I'm also exploring just a few typographic or abstract solutions, but likely will end up using some sort of iconographic treatment or illustration.

For a better interpretation of my scrawl up there, these are some thumbnails/preliminary illustrations that are along the line of what I plan to do. There will be texturing and so on to follow. 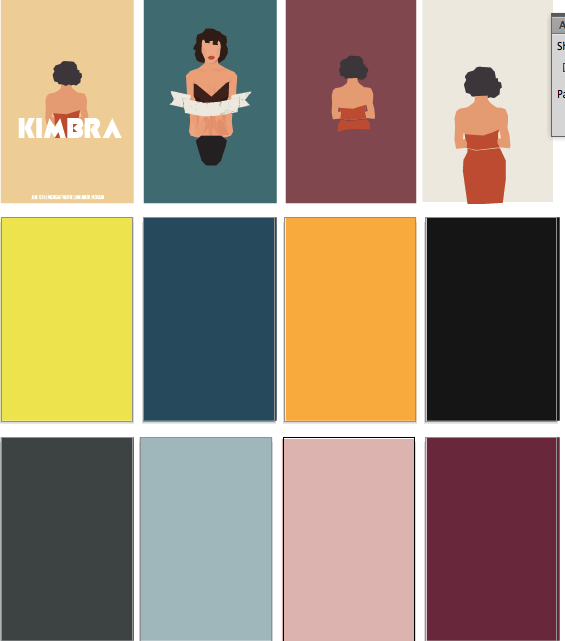 Some of my influences, in addition to her videos, are Saul Bass's clean, colorful style, and the illustrative work of my second hero in design next to DKNG, Dan Matutina. And also Tim Boelaars, because I like his icons and may be able to draw upon that.

This is a digital painting I did last year which is going to sort of set the aesthetic standard for what I'd like to do, but instead of digitally painting any reference photographs I want to work more with simple vector shapes and organic textures.

That's pretty much it. I'm looking forward to getting this poster on the road! Whoop whoop!