CCF: Should You Do Work For Hire? - Class Project

Lucy’s comic does not qualify as a work made for hire, and she does not seem to have any employment agreements that include creative work that could confuse her comic as work for hire.

Lucy’s live drawing sessions could qualify as a work for hire. However, since this is a weekly agreement, Lucy should make sure not to agree to terms that include wording such as “during the term of this Agreement” in her contract with her friend’s software company. Instead, to protect her comic and other creative works she produces for others or herself during the week, she should clarify that only designs and components of designs “for client pursuant to this Agreement are works made for hire”.

Lucy’s Barista job does qualify as work for hire and the lettering work she does during her shifts fits (or should fit) under her duties as an employee there.

Lucy filling in as an artist for the sci-fi Western comic is also work for hire. It is a contribution to a Collective Work.

And lastly, Lucy’s watercolor thank you could be considered work for hire and be claimed by the Fido company as she created the work under their contract. Lucy may want to read over the terms of that agreement and add that such creations are copyright transferred to the owners of the pets. 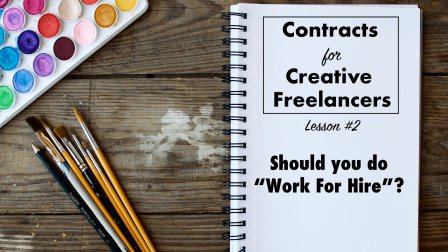 Contracts for Creative Freelancers: Should You Do Work For Hire?
Katie Lane