Fairly clean and crisp, with just a hint of background activity.

Background
Typically, my food photography style is somewhat "forlorn", or as one friend put it, #moodyfoodie. I usually shoot the dish in isolation, slightly underexposed, not particularly warm or inviting, as explained in the class.

I wanted to try...not a total deviation from that, but something a bit brighter, a bit more put together as a scene. It actually ended up still being a bit sterile because all the props were either white or glass.

Method
Obviously, burritos aren't exactly the most photogenic food—seeing as all the food is hidden inside the tortilla. It actually helped that the only tortillas I had on hand were a bit too small for burritos, so the contents spill out over the edges. I used a bit of garnish and sauce to add a bit of contrast.

It worked out that I use an old bourbon bottle with a green label as my water bottle, so I brought that in to work with the cilantro, salsa verde, and avocado.

The cheap IKEA napkins I use have a little bit of red in them, which works with the tomato-based burrito filling to complete an extremely subtle Mexican flag (even though you don't actually see much of the red in the final image. 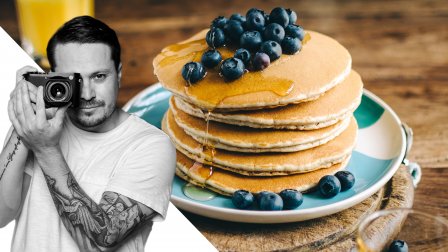