I finished watching the videos and got on to brainstorming my potion concepts. I was having a little bit of a struggle coming up with concepts that felt original enough but still fit with the theme of the project (and in a theme with each other).

I scribbled a bunch of concepts and some bottles alongside them and eventually landed on a set of artist productivity potions:

It took a while to actually land on designs that I liked for the bottles and labels, mainly because all of them are based on concepts that are kind of nebulous. Mo' Tivation in particular gave me a lot of trouble but I eventually landed on the muscle arm emoji as my inspiration and went from there.

Next up: moving into illustrator!

I started with Stroke of Genius using only my mouse and the pen tool because I'm traveling, and quickly came to realize how much I have come to rely on my tablet as part of my workflow. Working with the mouse feels absurdly slow and not that well controlled, so I've decided to hold off on finishing until I'm back at my desk with my Intuos.

Now that I've had some time at home again, I was able to work my way through the lineart for each of the bottles, and then started adding color. I found myself using the pencil tool to start lettering and then going in with the pen to clean it up, but in general I tended to default to the pen tool.

Here's each of the final bottles:

Once I settled on the bottles (after a whole lot of tweaking), I decided to add a little background to pull it all together. There were so many lovely potion bottles in the project gallery that I was inspired to make a finished version. Here's the final:

Would love to hear feedback!

Dylan, thank you so much for offering such a helpful class. I loved your diagrams and the time you took to explain not just how a particular technique worked, but a whole framework for thinking about how the technique fits in with the other methods. In general I think I'm still going to default to the pen tool, but after this class I'm going to make sure I remember to integrate the pencil tool into my workflow for future projects. 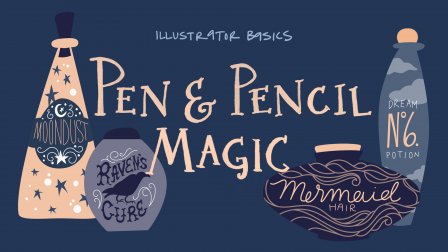