So, I made a blog a year ago where I review all kinds of books and decided to make a milestone map of my journey in that first year. First I laid down ideas, but I always do drawings, always, so it looks like the map already, but that is just me putting my ideas with drawings as usual:

Then I tried to make it directly on the computer without scanning. I got inspired by Harry Potter's Marauder's Map and tried to add footprints instead of dotted lines and "rooms" with a different milestone each. I wanted something that looked bookish, but in the end that idea didn't work well. I will give it a try in the future tho. Instead, I made a cleaner version and revised version of my first sketch and scanned it:

I made a curvy path and then a big fall to represent that milestone of being overwhelmed with everything and then the dots went back up and became curvy again. I used 3 colors: pink, mint and dark brown (tiramisu maybe?) oh! and gray for shadows. I also made the drawings bigger. Instead of coloring everything, I kept it minimalistic (just highlighting some areas) and gave it a retro/unaligned screenprint style, tadaaaa!

I love Books, Handicrafts and Nature 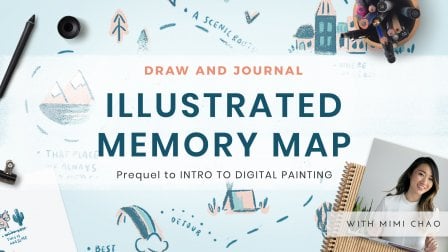 Mark Your Memories: Draw an Milestone Map | A Fun Illustration Project for Any Level
Mimi Chao