A young, aspiring writer always struggles to finish his writing attempts. He believe that he has great ideas, but when he starts writing them down - everything feels wrong and he stops. One night, after one more unsuccessful attempt he starts getting really desperate.

The emptiness of the nearly blank page slowly fills up his heart and the thoughts of suicide slowly invade his mind. He contemplates his wrists and notices the dark-blue color of his veins. Suddenly, he imagines that his bloodstream is filled with ink and thinks of his favorite writers - an American, who writes with a feather and a Japanese, who preferred writing everything with a brush. This reminds him the admiration he feels towards those men. Consequently, he realizes that if the blue liquid in his veins was really ink instead of blood - he would gladly end his life, so that greater writers than him could turn every drop of it into a real piece of art.

Then, he pictures himself laying on his back on the ground with hands wide open, closing his eyes and sensing how two small incisions gently open his wrists and his inked blood starts slowly pouring, while forming a black halo-like pool around his body. Suddenly, he hears the sound of a feather and a brush dunks in his blood on both of his sides, followed by the rhythmic melody of them dragging their bodies on paper under inspirational murmurs in English and Japanese.

The young author finally feels fulfilled and happy, knowing that he will live forever through the works of his two most dear artists. Abruptly, all background noise ceases and he senses how someone is putting a brush in his left hand, and a feather in his right one. Complete silence overtakes the room. The man opens his eyes, looks around and finds the following words carved into the pool of ink around him: 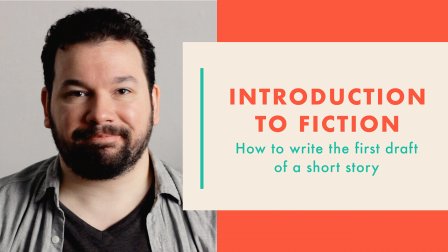 Introduction to Fiction: How to Write the First Draft of a Short Story
Seth Fried