The creative brief lists adventurous, fun, modern, stylish, and up-to-date -- as well as an overall feeling of excitement.

I'll be focusing on adventurous and fun.

I'll be focusing on artisinal, organic, and functional.

This is a company for the mature, which requires a more muted colorset.  That excludes hot or girlish pinks and all exceptionally high contrast or neon colors.

I wanted to have an all encompassing visual approach to BikeBook's competitors, so using screencaps and the eyedropper tool in Adobe Illustrator I created this reference sheet.  Colors are ordered from most to least used within the logo and web design.

Yellow was the most widely used shade, and often appeared in combination with bright reds and blues as well as black.  These brighter palettes (and websites) do a good job of exuding the tacky, touristy direction of the respective companies.  They confirm my decision to use a more muted color.  I will also be wary of using yellow moving forward, as it appears to have oversaturated the bike market.

I selected five of the nine photographs provided, focusing on the adventure that comes with exploring a city (as that's where the bikes will be based and most often used).  I also drew on the photos with palettes that related to the artisinal, vintage flavors BikeBook's target audience enjoys.  These five photos steered clear from the bright, bolder colors that could confuse BikeBook with touristy options.

As I've thought about the project, muted blues and browns keep popping into my head.  These photos confirm them.  I also like the dulle reds and greens that came out of the search,a nd the champagne colored whites could provide good accents.  As much as I like the purple color palette that arose from the city scene, I'm not sure it will fit as well with the ultimate palette.  Bikes, after all, are more often used during the day time.

The wireframe provided indicates the need for three main colors to cover the website's background colors and some text, and a white or light color to cover additional text and background.  Additional imagery and buttons should be based on those colors and their tints and shades.

My first palette is designed for people who want both an urban and natural feel to their bike.  BikeBook is going to start in three cities with significant greenspace, so it's a practical assumption that their clientelle, renting picturesque bicycles, are going to be thinking of picturesque places to ride them.  They'll find themselves in natural places: by a park, a lake, an ocean, as the blues represent.  The brown provides the contrast that comes in an urban natural environment, as a city skyline will always be in the background.  This brown is softer than, say, a black or grey one may think of when they first invision a city, and invokes vintage photographs where the colors have yellowed.  This palette is for our romantic notion of a city gone by, and what BikeBook's clientelle are striving to recreate with their rental.

My second palette is a more modern one: it is lively, fun, and young.  With this palette, BikeBook riders are ready to take life as it comes and embrace all it presents.  These bright colors are a muted, sophisticated twist on something we all craved in our childhoods: candy.  BikeBook does the same for our notion for bikes.  We still love a good candy bar and a breezy bike ride, but now we can appreciate them in a whole new way.  That said, the brightness in the core colors signifies our love for the indulgences of childhood, and proves even grown ups can have kid fun, right there in the city, with bikebook. 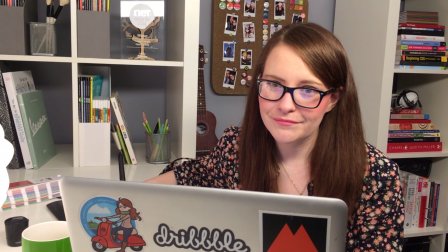 Color on the Web I: Design Cohesive Palettes
Geri Coady