I finally have gotten my act together to put pencil to paper today. I drew a draft for the first deadline and realized I needed to rethink my piece - the sketches I drew, just weren't communicating what they needed to.

Thanks to everyone for the feedback so far - here's the results of my second pass: 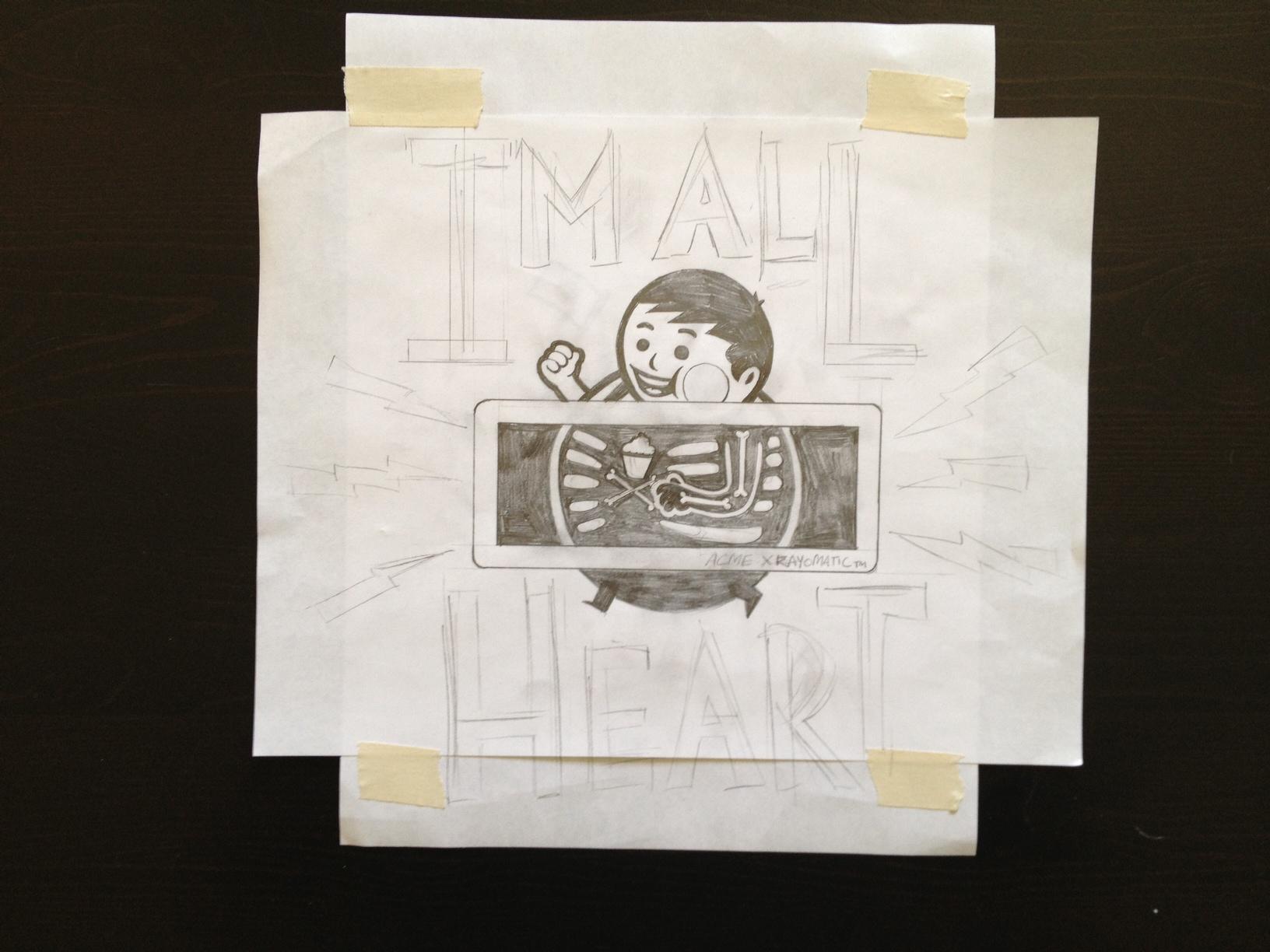 After my rough draft during week one, I realized that I needed more of Big Kid visible to really sell the mascot and make him identifiable. The signiture smile and the blush of his cheeks are just irreplacable. The next trick was to develop the method by which we as the audience would be able to see inside his body.

The first pass I tried was following an old comic conceit of adding a dashed line to reveal what was underneath. It seemed like a method I might find in a Chris Ware comic, and I thought that kind of aesthtic was actually pretty fitting given Big Kid's style. Here's how that turned out: 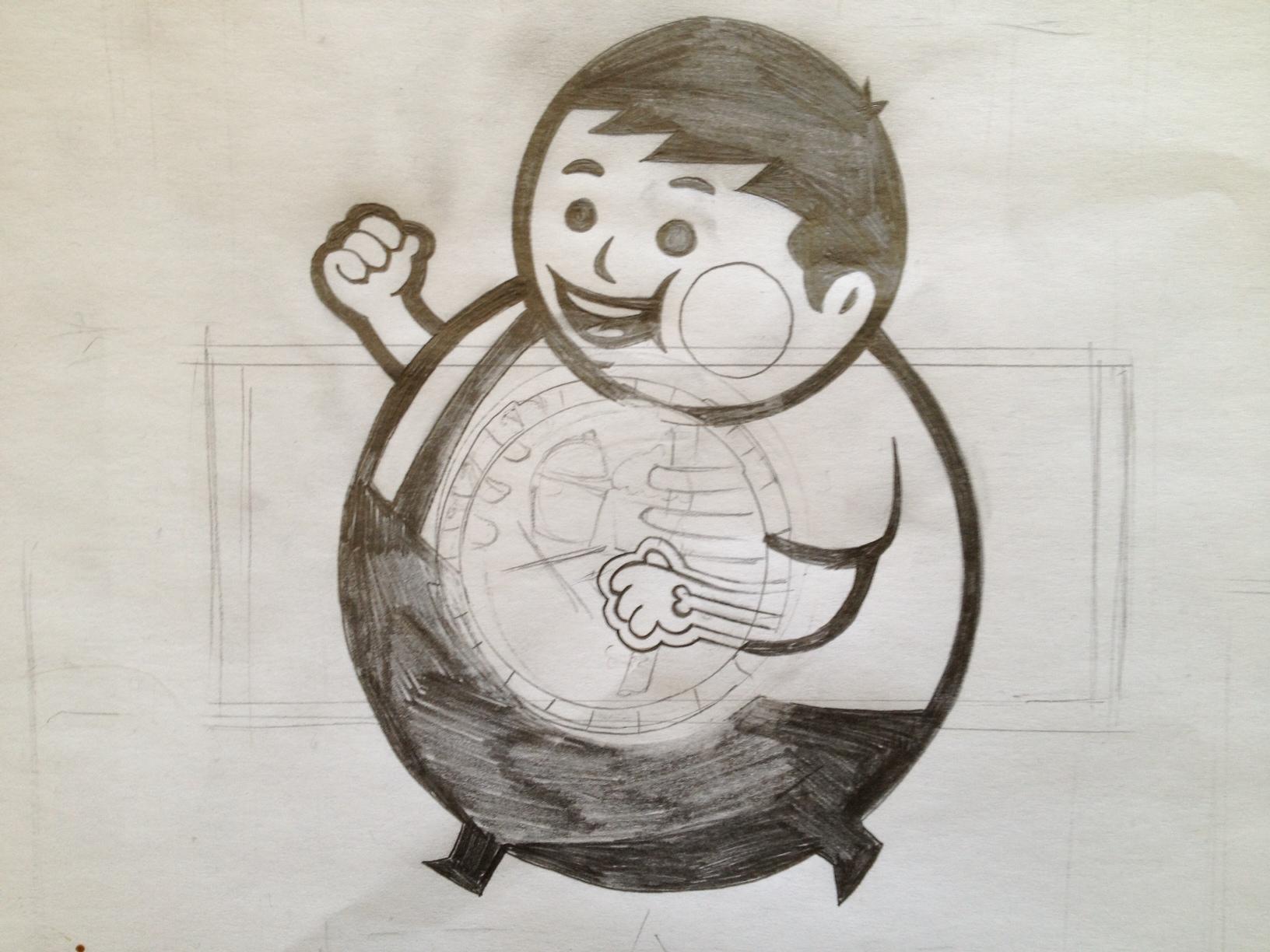 Waaaaa waaaa. It was obvious what was happening - but the concept was too muddy. I felt it was unbalancing to the image and overall, it just complicated what was a pretty simple idea.

I had considered an x-ray screen, but was unsure how to tie that image into the piece believably. What I didn't want was to create a literal scene where Big Kid was in the doctor's office, Big Kid being struck by lightening, or something of that nature. I began thinking again about Chris Ware's work and his interest in ACME novelty - a theme also explored by fellow classmate - Elsa Carenbauer

By creating an Acme Trademark on the screen, I feel it could work. 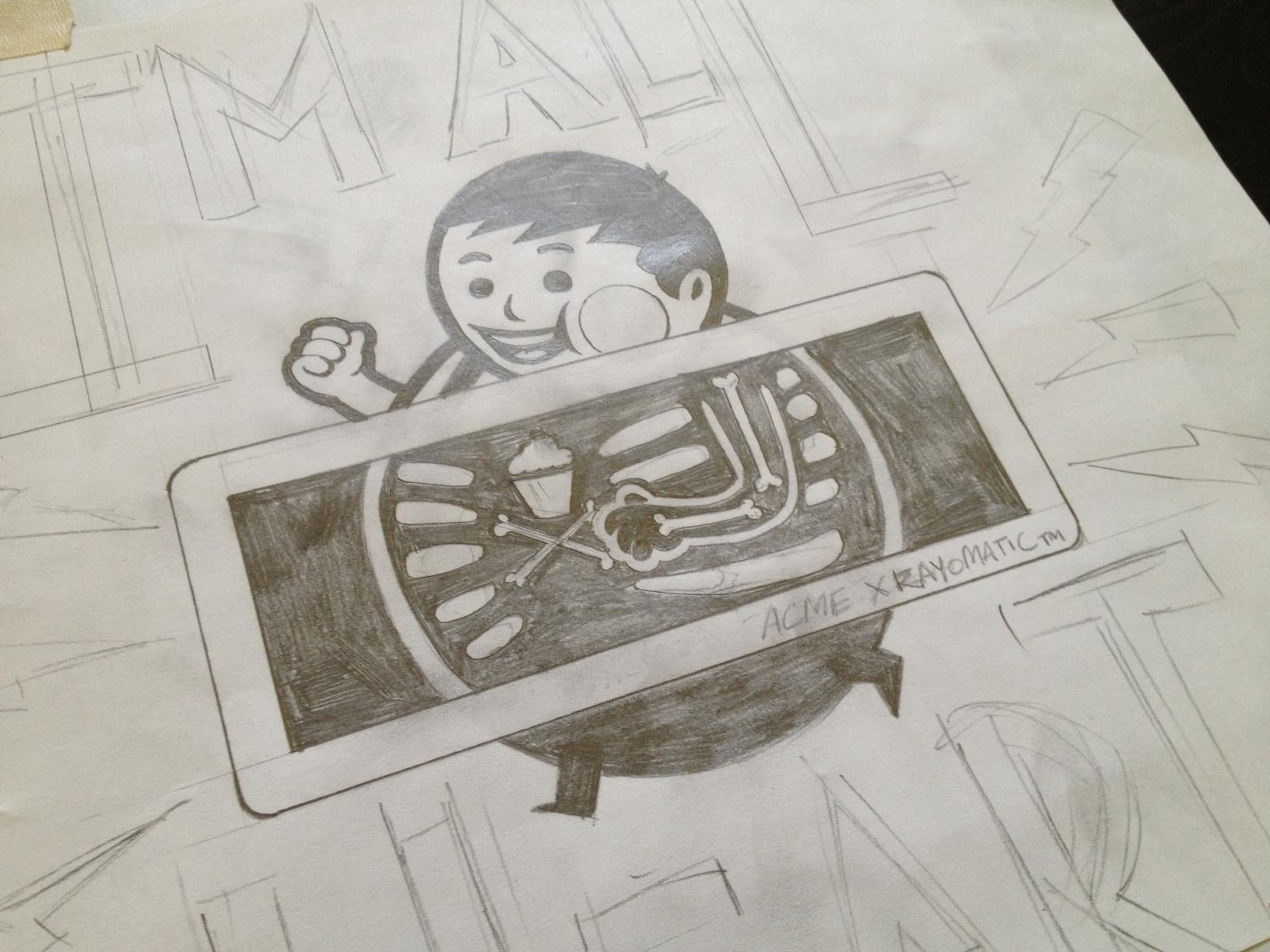 I also changed my initial phrasing to now read - I'M ALL HEART. I just think it reads better, not only in balancing the image better, but as what it says for the intended wearer of the shirt.

As for the font, I think I'm gonna hand draw this one. I actually turned to Chris Ware specifically for this, as he is an artist who hand draws all of his typography. I think I'm going to make letterforms like similar to this style: 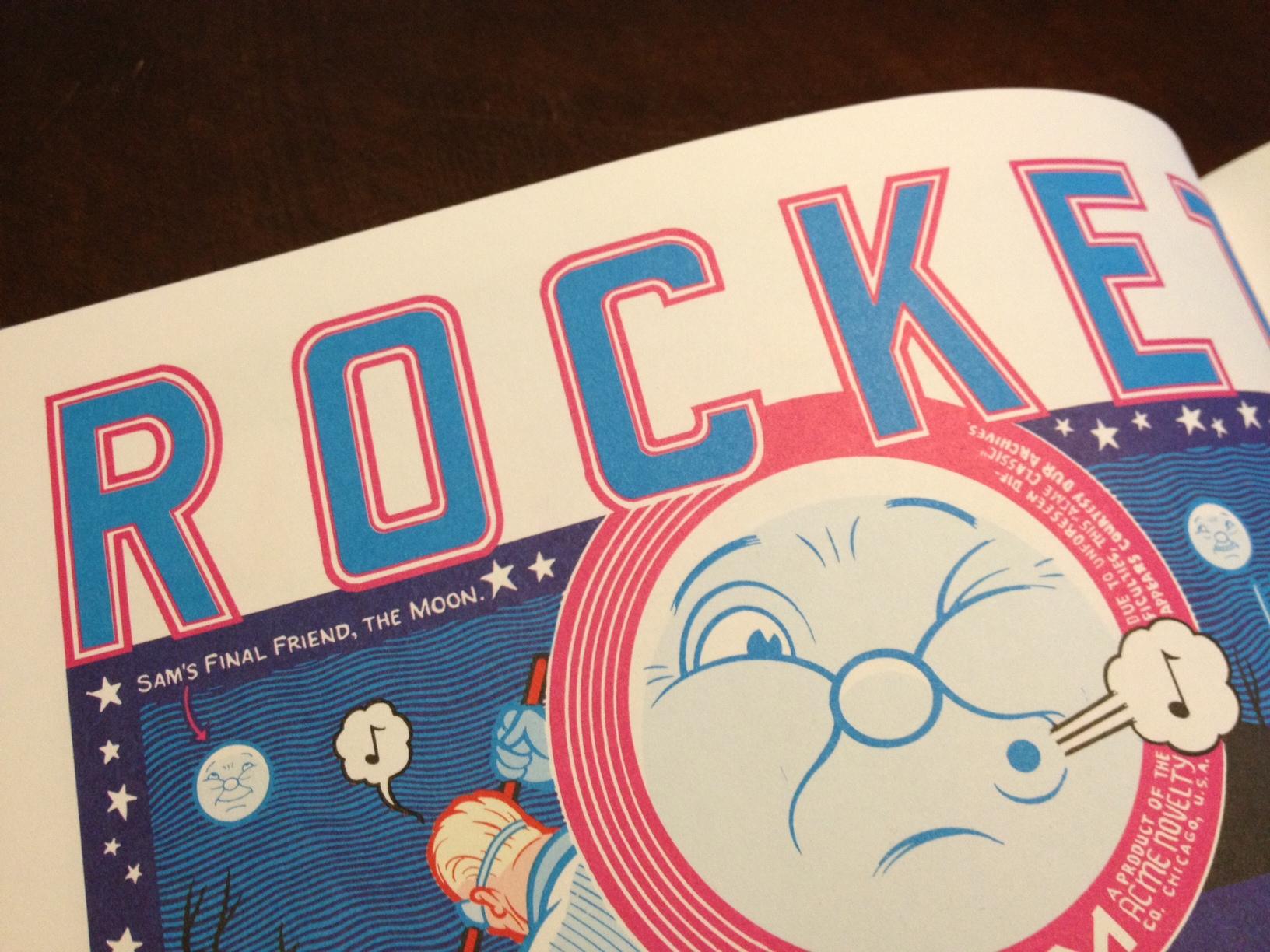 I'm going to draw lightning bolts along both sides of the design to heighten the idea of the x-ray device, and balance out the art a bit. I originally was designing a horizontal piece of art, but as it has developed, I think it has become vertical.

What do you guys think?

I'm working on the sketch now for the shirt, and am excited with my progress.

Given the news out of Boston, I'm diverting my energy elsewhere. I'll post my art later.

I've loved this week's curriculum. I had a lot of preconcieved thoughts coming into this process - just about what kind of art I anticipated making. I had no idea if I would work here to create one of my "clever" t-shirt ideas, create a new piece of art entirely, or emulate someone else's brand, but the paces of this process that Chris walked us through, led me down an interesting and unexpected path of re-evaluting some of my preconceptions. Not just about my own art, but the industry, the medium, and the part I want to play in it.

So first - Thank you, Chris.

There's a long story to be told somewhere of my love for t-shirts - a story, I imagine, to be like a lot of other people's in this class. I wanted to make t-shirts when I left high school (a bazillion years ago), and never quite got around to it. I just wasn't sure it was within my reach, and I guess I kinda chickened out. Like a lot of artists, my interests are varied, and what never really clicked for me about t-shirt art, I realize, was the branding piece. There were a lot of ideas that I thought were cool, but nothing that made that branding connection. And honestly, the t-shirt art that always spoke to me was of particular artists - their own distinct brands. I loved buying up Sam Flores, Jeremy Fish, and Nate Van Dyke t's. As someone who has always loved drawing character's, their work was fun. I felt by wearing their t's that I was promoting art and not a brand.

Without a personal brand that I champion, I decided I want to take a stab at this, the way the class is leading me. I'm going to go cupcake - all the way.

I remember a few years ago, walking out of the Other Side Cafe in Boston after having lunch with my sister. As we made our way down Newbury Street, we saw the sign for Johnny Cupcakes and walked in planning to buy dessert! What we found was obviously - so much better. It was such a great way to be introduced to the brand. The bakery style cases and freezers, the large mixing bowls, etc. It really felt like discovering something. And that was my take away. There was something so playful about the idea, it wasn't as though somone was trying to trick me, I felt I was being let in on the joke. That this store was a canvas where the unexpected could appear.

Looking through all the imagery of Johnny Cupcakes that populates the web, this guy was just screaming at me. BIG KID! What a perfect image. Also, given my love of character tees - this guy is begging to drawn and redrawn and redrawn again. 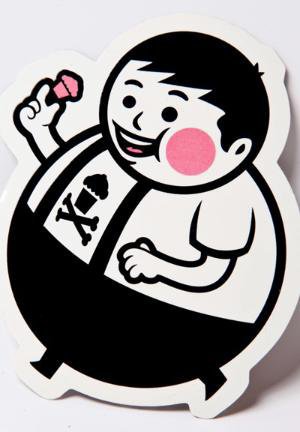 This guy is amazing! He's like a mix between Steamboat Willie and the kids faces you'd see drawn on the side of vintage JOY ice cream cone boxes - or something! Only portly. What I love is just how joyful he looks - below, waving a flag, he could be marching along a parade route, following the crowd. And it's the cupcakes that have made him this happy! it's brilliant. Big Kid is a hero. 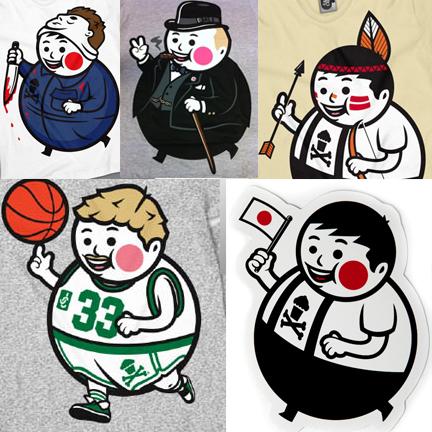 What makes him even more amazing is all the variations of him there are. He is a brand unto himself. While dressed a dozen different ways, he is still recognizable and unchanging.

What I aim to do over the course of this process, is to make a variation of the Big Kid icon. I want to stay true to the playfulness of Johnny, embrace the spirit of this kid who seems ready for anything the world throws at him, and make a declaration about what I believe Big Kid is saying about the JC brand in general. That this kid is ALL HEART. The spirit of play is alive in this work, and I think Big Kid nails it.

Here is a veeeeeeery rough mock up of what I intend to work on. 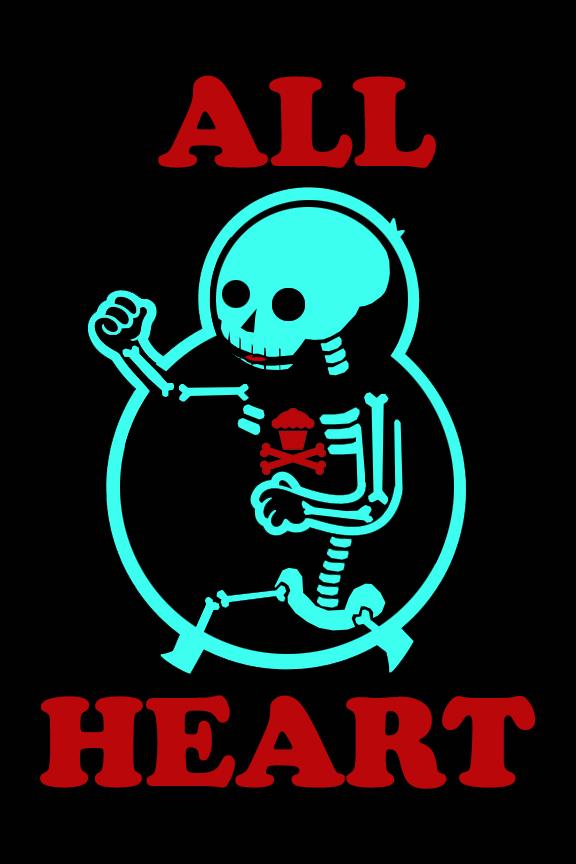 I want to create an X-ray version of Big Kid, where you see that his heart is actually a cupcake. In this rough pass, I see there is a lot of work to be done here in making the original evident in this variation. How is he still Big Kid without a face? Also - his internal anatomy is troubling. Landing where his bones actually are will be a challenge, as will striking the balance of how much detail to show. What is so great about the original is how evocative the basic shapes of him are. Getting that right will be hard for me I think.

I chose a funny time in my life to try this out. I've got a nine month old beside me, and my mother is visiting from Boston this week. I see a few late nights in my future. Wish me luck.