"You never needed anything from the fake wizard, anyway" is a quote from The Wiz (1978 motion picture version of a rendition of The Wizard of Oz). It's what Dorothy says to her friends once they realize the great and powerful Wizard of Oz was a fraud. I love this quote because I think it can apply to so many instances of real life. Sometimes the "fake wizard" presents itself in unrealistic expectations of others, social standards, or anything we may have idealized and allowed to have too much power in our life instead of choosing to believe in self. So, that's why I chose this quote.

In the initial images, I was just trying to get the ideas down on paper. I knew which words I wanted to emphasize, but I didn't know how they could work together. (Critique points, #1 and 3 apply)

In the image below, I wanted "Anything" to be stylize, but it didn't really fit in with the other forms of lettering (critique point, #2). So I rewrote, "Anything," and I think it was an improvement. I liked "Wizard, so that word remained the same throughout, but I rewrote "Fake," made "Never" bolder, and opted for sans serif for "From," and "The."  Then I played around with the composition a bit more, switching the placement of "You" - which ended up right back where it started.

I settled on flanking, "You" with flourishes and adding a little sparkle to the background and as a fill in, "Fake Wizard" to speak to wizardry. I filled "Never" and "Anything" with a texture I made from pen marks to speak to the idea of crossing off unneeded items off of a list.

I think it's more cohesive now. Thanks for this class Mary Kate! It was really helpful because I'd abandoned the initial brain dump in my sketchbook for at least a month or two. Your five points helped me see things more clearly. 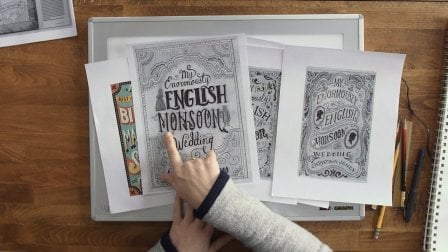