I had so much fun with this class!

I have previously done most of my work in cut paper and I have been wanting to get more and more into digital illustration, but in a way that feels more exciting and hands-on to me. This has really given me a new window into this and so many ideas of how to integrate analog and digital.

I chose to do my theme on my current "day" job, bartending. While showing the tools of the trade, I really wanted to depict a unique view and try to tell the story of a busy (often quite messy) night, or the aftermath of a big rush.

The final sketch I worked from:

A couple of many many marks:

Oh my gosh, when I realized that for the liquor spill, I could literally make an ink spill and scan it, I was floored! That was such an eye-opening moment for me!

This was the first one I created, and I had way too much fun playing around with all the textures. But when I stepped back, I felt like I had a little TOO much fun, overworked it and created a piece that was overwhelming and too  messy.

So, I paired it back down and took a simpler stab at it.

This was the result (which I think I like a lot better):

In terms of feedback, I am curious what folks think about the balance? Does it feel balanced?

In the second image, I also struggled with balancing the black and the blue - does it feel odd that there is less black on the right side of the image?

I am also interested in any feedback at all - anything that stands out to folks that could be improved? Anything that looks odd?

Lastly, I definitely struggle with doing "too much," like Tom mentioned in the video - making too many marks, too many sketches, creating too many options for yourself. Do you Tom, or others, have any suggestions for this or techniques you've found for yourself that have proved helpful?

Thanks so much everybody!

Again, I so so enjoyed this class! Thank you so much, Tom - I look forward to taking more of your classes! 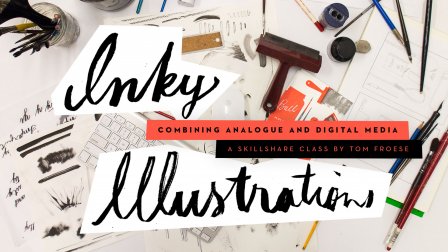