My name is Harriet, I live in the seaside city of Brighton in the UK. I've got into surface design in the last year and been working hard to create patterns and improve my skills. I've recently taken the plunge and gone part-time at my Horticulture job so that I can dedicate more time to illustrating and surface design. Ideally I'd like to turn this into a career going forward but very aware that I'm at the beginning of this process though eager to learn, develop and get familiar with the illustration industry as a whole!

My main interests for design are the natural world, plants and animals.

My working/studio name is Bowerbird House, I update my Instagram more regularly than anything else to take a look @bowerbirdhouse_

I took Bonnie's advise and wrote out a story and 20 words for my chosen theme 'Arctic Winter' which I haven't done before but found very useful! It is a great way to get the creative juices flowing and something that can be referred back to for ideas.

Story: Far to the North lies a treacherous kingdom filled with long nights & blinding blizzards. Amongst the towering snow covered mountains and the dizzying dark crevasses there is a rugged beauty to be found, as well as life. Strong creatures with gleaming white fur roam these wilds,  life is harsh but they find a way not just to survive but to thrive.

Sketchbook Images: I think I've done too many animals and not enough other motifs! I can add these in later (smacks own hand "Stop drawing animals all the time!").

I've used image trace for the simpler marks but gone over the other motifs with the Wacom as I find this better for going in and editing.

For a colour palette I wanted to stay fairly restricted to reflect the more 'monochromatic' snow covered landscape. I chosen nine colours - not sure is it's best to choose more at the initial stage?

Photos pulled from Getty Images, I do try to work with my own reference photos where possible have no planned trips to the Arctic Circle any time soon, as much as I want to!

Here is the Geometric pattern I have done based on tall thin trees (in 3 colourways). I always seem to have trouble creating simpler patterns as I can't help thinking they look too simple and unfinished, I always want to add something else or a bit of texture!

I started by making a background layer of diaganol 'snow drifts' before adding the vector sketches on top.

I placed the vector sketches fairly quickly then spent hours going back and forth with colours! I ended up adding more colours to my original palette, these motifs were too complicated to get away with such a restricted palette.

Once I had more colours to work with I added some texture to break up the blocks of solid colour.

Then spent several more hours tweaking and tweaking, never knowing if the pattern was too busy and cluttered or too sparse!

I'm happy with my most current version. Whether it stays as a finished version remains to be seen.

The next day... Nope, nope, nope. Changed my mind. Opened up the file today and it looks very disjointed. When I try more scenic or illustrative designs they always look like separate elements plonked on the page together!

I've done another version which I think has a bit more cohesion:

Using the layering technique in the workshop's video I've made a fairly simple snowflake design. Not particularly original but just getting use to the technique!

First I drew some vector snowflakes and then just played around:

The nice thing with this is that while in the re-colour artwork tool I discovered that every combination looked good!

For the Lined pattern I looked at photos of cracked ice and tried to work out how the heck to recreate the effect! I've had to go for a more abstract interpretation as it would take too long to get a realistic version.

It took me a while to get something I liked but you can see how the layers have built up.

This might be one of those patterns where I've gone too far and pairing back a little would make for a clearer pattern.

Here are some colourways but they look nothing like ice when they're different colours!

Tues 12th Dec - One last pattern  I wanted to do was a reworking of the animal elements in a landscape environment.

I tried a couple of ideas, one was Icebergs floating on the sea another a mountainscape. I liked both of these but realised they were too large scale to include the animals so I needed to 'zoom in' a bit!

I instead tried starting by placing the animals where I wanted them, then drawing the surrounding landscape to suit (rather than starting with the landscape). Progress pictures:

This is as far as I got before deciding to stop for now. Some more tweaking but I feel it has more cohesion than the other patterns I tried earlier with the same animal motifs:

Here is a portfolio of the mini collection created over the last two weeks:

I have really enjoyed pushing myself over the last two weeks. Thanks to all your lovely and supportive comments and suggestions, they've been really helpful.

These are some points I wrote down to think about for myself moving forward and some thoughts I had on improving cohesion within a work which might help others in the same situation:

Thanks again to Bonnie, you are an inspiration! I will keep working hard and always push myself to improve and learn.

Good luck to all. I'd love to stay in touch and see everyone's progress to lets connect on the old social media! 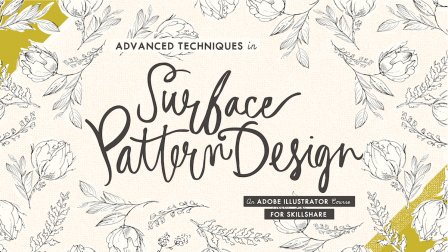