Feels like I lived 3 lifetimes in between first starting this course and now FINALLY posting the finished projects! I took it very seriously as I'd like to make a shift in my illustration career to include more animation and Photoshop only goes so far...

I completed the arcade animation while watching the videos, step-by-step, and besides some trouble with the transition, it all went surprisingly smoothly (I should say UNsurprisingly, Jake is a phenomenal teacher). Here it is:
Satisfied with the result and looking to add something original in my portfolio, I decided to replicate the animation but with original illustrations I create:

I studied for a while what I could swipe the truck and faces for, how to include the transition and camera zoom, etc. The concept I ended up with was of a dense jungle acting as the arcade screen's box, and a boy trying to touch a firefly instead of a truck shooting tacos. I compromised on the joystick movement but could use things such as the glow effect on the firefly or the vignette effect.

First I sketched out on paper some thumbnails for a storyboard. Once I had a pretty good idea of the main elements and drew them out in Photoshop, I made an animatic:

Unfortunately, right after that, my world turned and twisted and forced me onto other things... Flash forward to the coronavirus quarantine (I'm Italian), and I've been trying to turn a pretty negative situation into a positive opportunity.

The best part of it is, I had vague memories of the notions but because I stopped after the first step-by-step production, they had not sedimented -- animating a second time, and with many new challenges I had not foreseen, really helped me internalize the skills!

Here is the final result:

Wow! You're still reading? Thanks! Here are a couple more things I think are worth sharing:

- That circular transition was *not* like the straight one. I made a mess multiple times! I tried with shapes and masks and reversing keyframes... It needs plenty of work, I won't even confuse you on how I achieved it because it's ugly to look at in the timeline haha animated mask expansions with different blending modes - I give myself a 3 outta 10. Maybe 4 for effort, I burned some brain cells on that!

- One thing I am proud of though, that was not in this lesson but is actually fairly easy to replicate/explain now that I figured it out, is that flashlight effect that light up the boy as the fireflies go near him. Don't get me wrong, plenty of messy in there too and layers created in one pre-comp later moved to another... madness! But the technique itself is easy: I've found a short tutorial on Youtube about masks created by using one layer as the "peephole" between the layers above it and below it.

Since there are multiple fireflies, I had to duplicate the boy as many times as were the masks I needed (one per firefly). Then I created my "peepholes" with simple solid layers and ellipses. Once I applied the Alpha Tracker to the boy's layer, I had the effect I was looking for: a light reveal!

Hope this helps someone in any way or form! x 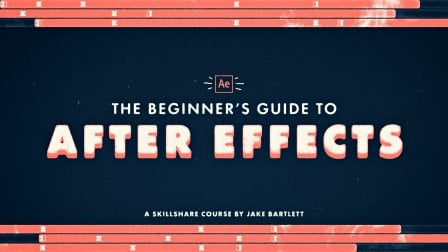 The Beginner's Guide to Adobe After Effects
Jake Bartlett