The first animation of the year, I've done a jumping ball. I personally feel the action is a bit rushed. Any comments on how to improve this?

This was fun experimenting.

1. At first I just did a normal slow in & out for the square hitting the ground:

For the falling part, I followed the rule to double the distance difference of subsequential consecutive poses. To illustrate the pose-frame-distance relationship, the chart is like that:

2. I thought of adding in the squash & stretch effect learnt from yesterday, so the animation loop became something like this:

3. That try gives an interesting visual effect of more presence of the gravitational force. So I maintained the frame number and took out the squash effect, it looks sth like this:

4. I thought of adding in the stretch effect as well. So it becomes like a bouncing square jelly:

I took the liberty to double the frames at pose 9 as now it seems more time is needed for the square to resemble its shape and overcome gravity.

5. I wanted to see how far I could stretch the ending pose (at the original starting position) with the whole movement still looks natural and organic. The result I found out was to hold the ending pose for 5 frames as longest (including the starting 1 frame at pose 0):

This way, it still looks natural.

If adding one more frame, the fact of the square staying at that ending position becomes stagnantely obvious:

This could still work in some scenes where we want to portray a sense of 'stop' in that object. And I guess the number of frame to be held at the same pose to give a similar effect will also change with a different distance of movement.

This is how my Adobe Animate Timeline looks like at the end:

I've taken Lucas' comment and added in a contact frame of the square before it squashes against the ground. It does seem less strobey and visually more smooth now:

My first 2D animation haha! It was fun to do, had some troubles navigating in Adobe Animate but finally completed this annoying guy here XD 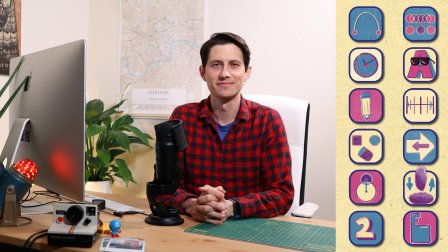 Principles of Animation: The Art of Appealing Motion for Beginners
Lucas Ridley