They say absolute power corrupts absolutely and it was certainly true of those wannabe kings and queens working their way to a spot on the iron throne in Game of Thrones. By combining a combination of stop motion animation footage with some funny cartoon effects you can create a humorous animation without getting egg on your face lol.

Love Hayao Miyazaki’s classic Japanese animation, Spirited Away, so thought I’d play with the story, imagining a different outcome for the spirit No-Face if evil witch Yubaba had been able to mess with time quite literally as a headed metronome lol and defeat it! Even only using a small number of frames can give you great effects.

The greater Bermuda land snail has been found alive and well in Hamilton after it was thought to have been extinct some 40 years ago. Wow! So, in honour of its new found famed appearance, thought I’d have a go at creating a bouncy introduction to the world again from said mollusk!

Getting some ideas from other Procreate courses as well. Anyway with my tongue firmly in a cheek (don't know whose lol) I'd say there's a bit of of skullduggery experimentation going on here, one involving the use of colour, textures and brushes to see how they all fit together, as part of an animation on a colouring book skull pic.

I wanted to see how injecting colour into an existing doodle sketch could great some cool effects. Because of the ongoing Game of Thrones coffee cup prop clanger blaming row I thought I could modify my original Night King animation to good effect!

There's a newly proposed London high rise rooftop swimming pool in the offing, but it looks like it could be vulnerable to invasion by the local wildlife lol

Not sure I can do any of the WW2 veterans justice as the 75th anniversary of the D Day landings is commemorated. Must have been really scary facing your enemies full on as you landed on French soil! Gave me an opportunity to try using textures with lettering and masks as an intro transition.

Amazon's Good Omens is as quirky and brilliant as I'd expected with a brilliant classic Bentley roaring around London and Oxfordshire. I've been trying out the new video layers feature in Procreate, which means I've had great fun animating said classic car in motion comic book form.

Pinch Punch, first day of the month and at least one cheeky chappy is happy that May has gone forth into June, because this means it's one less month to wait until the release of new Star Wars film, 'The Rise of Skywalker!'

Game of Thrones may have finished, but just recently I discovered this amazing light and tangy ale on tap in a local pub. It's called Dragon in Bavaria from Oakham Ales brewery. Seemed only fitting to bring said mythical beastie to life and have him, or her enjoying a well earned drink too!

Couldn't resist bringing this old man to life again, so happy World Dracula Day (May 26th) to all the cosplayers who found their inner Bram Stoker. I'm sure you all counted hugely and put on a most fiendish show in honour of the first publication of Dracula the novel back in 1897. Mu ha ha! lol

To celebrate the weird and wonderful Hitchhiker's Guide to the Galaxy, fans of Douglas Adam commemorate his life with Towel Day (May 25th). Rich talks about using quotes or text, so in that spirit I doodled a sketch imagining The Night King from Game of Thrones as an additional character facing off wet towels in a vain effort to get them dry for interstellar travellers lol

Queen Victoria - I used a well known saucy quote Vic said, which I've slightly modified to show her rebellious side and celebrate the 200th anniversary of her birth on May 24th 1819.

Footy Giraffe - What's not to love about Giraffes - I used the transform tools to animate the legs, 'cos I just can't do them lol

Purple Dino Sneeze - Played with the warp tool to get some cool bloated effects. My original idea was to have the cat jumping out of its skin, but that was tricky to animate and this works as well I think, so settled for scaring the sleeping moggy completely out of its wits!

Rocketman - Nope not the Elton John film, but it did give me an idea for an animated theme. Here I'm messing around with textures, groupings and brush effects, using drawings and icons imported from Pixite's Assembly app.

What's up Doc! - A nod to the old Warner Brothers Bugs Bunny endings, plus it was Easter when I made this.

Stonehenge Alien Visit - Recently it was World Heritage Day, plus it'll soon to be the Summer Solstice, so thought it was high time an alien visited this great UK landmark!

Skully - A nod to The Bard, Mr Bill Shakespeare. Quick play with a skull as you do lol 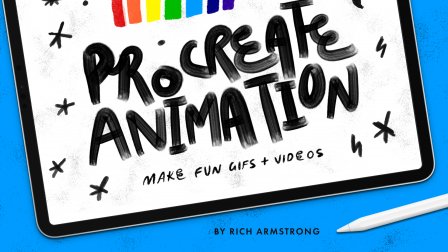