My name is Anthony Leo, I am from New York City, and the company I'd like to collaborate with is Adidas.

What started it all:

Back in middle school, it was pretty tough to stand out when everyone was wearing the same uniform. Because of this, our sneakers always made major statements up and down the halls. It was the one and only thing that separated us from everyone else. While everyone was wearing Nike's Air Force One Monday through Friday, some kids had the luxury of having 8 or more sneakers in their weekly rotation. Even though Nike's Air Force One was at it's peak, it was beginning to become too common, which drove us to buy the Adidas Super Star. 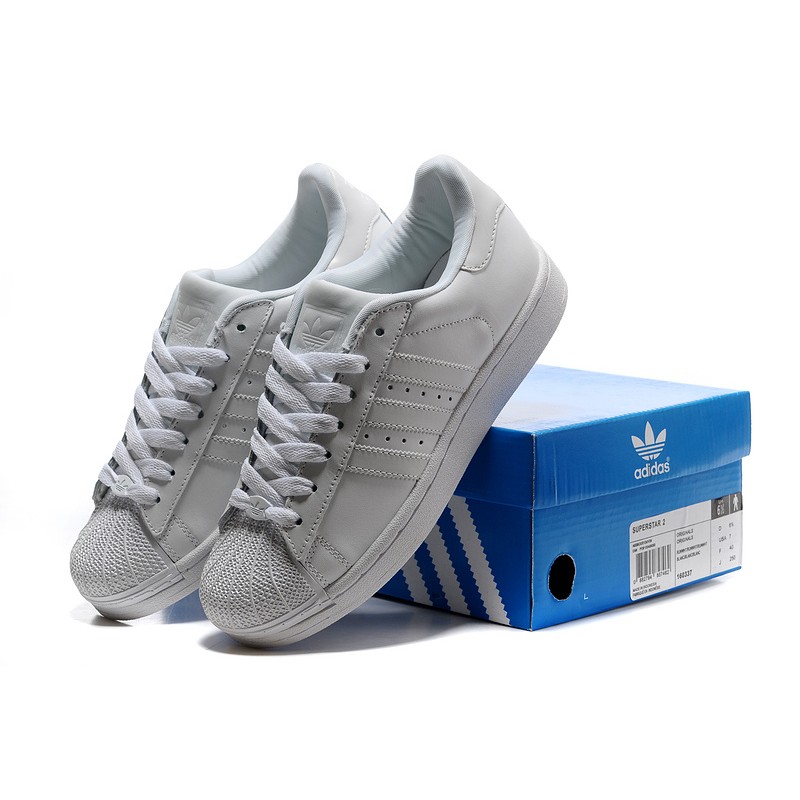 The Super Star had a much more classic feel to it that made people feel as if they were dressing appropriately for all occassions. The most popular Nike's and Jordan's at the time were way too sporty and couldn't be pulled off with uniform.

Still, to this day. Adidas is able to pull off lifestyle products using their three stripes much more effectively than competing brands who slap on their athletic logos on their lifestyle products. If your brand is known for basketball, it's not too easy to add your logo to a vulcanized shoe. Certain logos reflect their intended use more than others. This is one area where most companies are struggling to capitalize in each market, while maintaining their brand image.

The Stan Smith seemlessly incorporates the brans iconic three stripes into the shoe by adding three rows of air vents on the side, for both ventillation and branding. Competing brands rely heavily on their brands icons or logos which is something that takes away from the elegance found in simplicity.

The Stan Smith is a model that has proved it's place in footwear history since the early 1970's. It is just as iconic as the historic models put out by competing brands, only it's much more obtainable and affordable. This gives everyone the opportunity to get a hold of the shoe no matter how many times the shoe makes a comeback. It is older than the Air Jordan 1, older than the Air Force One, older than the Reebok Pump, and still proves to be an essential part of outfits on a daily basis in an everchanging marketplace based on fluctuating.

Growing up in The Bronx and constantly commuting to Manhattan granted me the opportunity to assess the value of branding from multiple perspectives. In The Bronx, the dominant style is still very basketball influenced. The main demographic shops around basketball sneakers worn by their favorite basketball players. However, there is a growing desire to stand out amongst others.

I remeber when being fresh didn't depend on how pairs of one particular sneaker you owned, it was more about how wide your variety was. The sneaker market has been kicked into overdrive by resellers and is beginning to burst. People can no longer afford what they want, nor can they guarantee that they will even come close to owning a pair of what they want.

I have been researching and studying trends within the sneaker market for years now. And I can finally say that the days of one company dominating the market are slowly beginning to fade away. Besides the fact that the sneaker market bubble is slowly bursting, another trend I have started noticing is the desire for most sneaker lovers to blend in while standing out. Even streetwear is becoming less about being an explosive array of colors and more about wearing all of the "right" pieces that can still make a statement. Whether it's the right snapback or the right trainers / running shoes that go perfectly with a simple yet expressive outfit.

What can I bring to the table? / Why partner with me?

Years of experience and market research in trends and sneaker design, as well as a new take on things from the perspective of someone who is constantly traveling in the city and different states.

The relevance of the brand is duely noted, yet so underrepresented.

This is the main reason why Mark King along with the rest of the three stripes brand has decided that Brooklyn is an ideal location for their new HQ.

The Bronx is shifting in terms of style preference and runners are becoming more and more popular in certain areas. But Adidas has yet to capitalize on this in The Bronx in terms of word of mouth and marketing in the borough. The most popular models in The Bronx are Stan Smith's and the ZX Flux. Which can be seen at least 7 times a day on a single commute between The Bronx and Manhattan on the 6 and 4 trains.

The Adidas Tubular Runner is underrated in The Bronx and it's because the consumers are not too knowledgable in terms of what choices they have open to them besides the Roshe Run. Adidas Boost technology is at the top of the game at the moment and consumers in The Bronx are unaware of this because the waves of the runners that incorporate the boost technology, have yet to hit consumers in The Bronx. Models like the Ultra Boost and the ZX 8000 boost haven't reached enough satisfied consumers to spread a good word of mouth around neighborhoods that will get them shopping. Not enough consumers in the borough are subscribed to the Adidas to receive emails about how they can trade in competing shoes to get a 50% discount. There just isn't enough knowledge yet and people haven't tested these products enough to change their minds.

Besides that, there aren't enough consumers who are knowledgable of the silhouettes Adidas has created that easily trump basketball sneakers made by competing brands that are used for casual and formal outfits.

People are still willing to crazy prices for a luxury version of a General Release basketball sneaker.

Instead of just investing in the right sneaker that mixes and blends all of the right elements together in a classic.

“Treat your men as you would your own beloved sons. And they will follow you into the deepest valley.”

If chosen, I will always put my best foot forward and make sure that nothing but the greatest result is met in any presented situation.

What do I provide?

Here's what a few people had to say about my previous work:

Anthony, very exceptional. I like the brand and I like the concept. At 21 you have shown a degree of detail that many brands that are running today don't have.

Even while I was working on the project submission for our brand, I kept up with the development you put in on MuteNY. It's easy to relate to the crazy passion you are pouring into this brand, the meaning, the story that you're writing, the designs and symbolism. It shares a lot of the same approach we took when we started developing Loyal K.N.G. I can already tell you definitely have something cool here. And coupled with your imagination and obvious hard-work ethics, this brand will definitely move forward quickly and gain awesome momentum. You got this man, for as young as you are, you got your head and heart in the right place, and that's going to compound well into the future.

Illustrator and Co- owner of The Yello Sticka

I can see you really have a clear direction as to what you want to portray in your concept. Also i like the research info as well, means you want to produce something with longevity. Nice graphics as well.

wow wow wow! what a project discription!!!!! soooo good! i am really impressed by the time and effort you have put into this, and thought! glad to like this project and follow you along the path! cheers, marco

My two feet are on the ground and in the streets 24/7.

Whether it's in New Jersey, Upstate New York, Westchester, Pennsylvania, New Rochelle, TarryTown, Park Slope, Flatbush, Williamsburg, SoHo, the LES, Wall St. , Washington Heights, Hunts Point, Fordham, The Grand Concourse, or My neighborhood, Castle Hill. One thing is on my mind no matter where I walk.

I am 22 years old and am usually surrounded by people who come from all kinds of different demographics.The age group usually ranges from about 16 to 35. One thing is always apparent when around any of them.

They all wear clothing and they all have something on their feet.

Even though they usually have a specific interest in footwear, one style usually remains consistent between each group.

A simple/classic silhouette is worth more than something that cannot be repeated more than two times a week.

But, that doesn't make it impossible.

The Adidas Alliés is an all new hybrid classic that combines the elegance found in unforgettable Adidas silhouettes into one iconic sneaker capable of transcending any occasion. Every pair of feet, needs reliable allies. 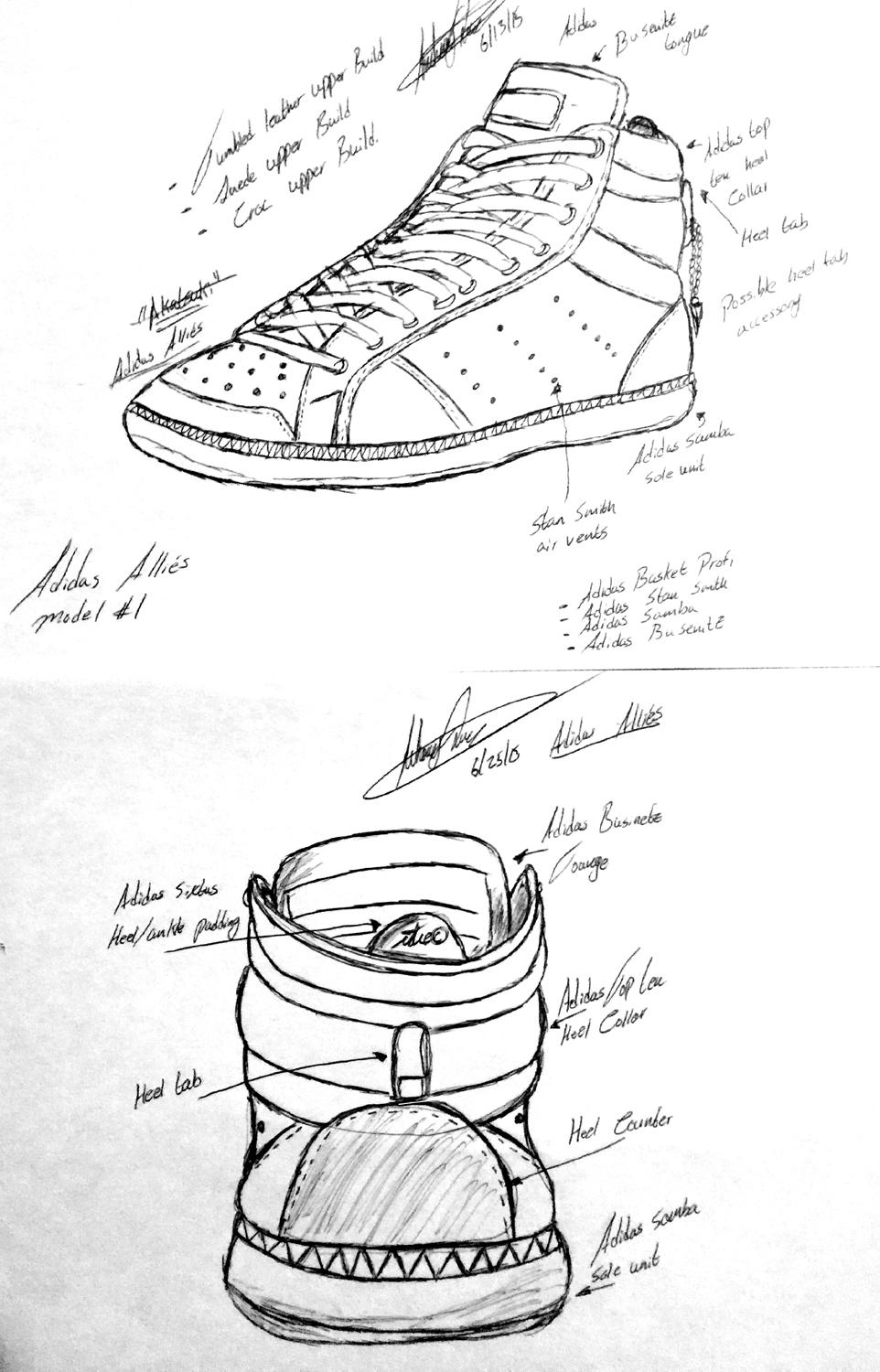 The Alliés borrows components from the following sneakers: 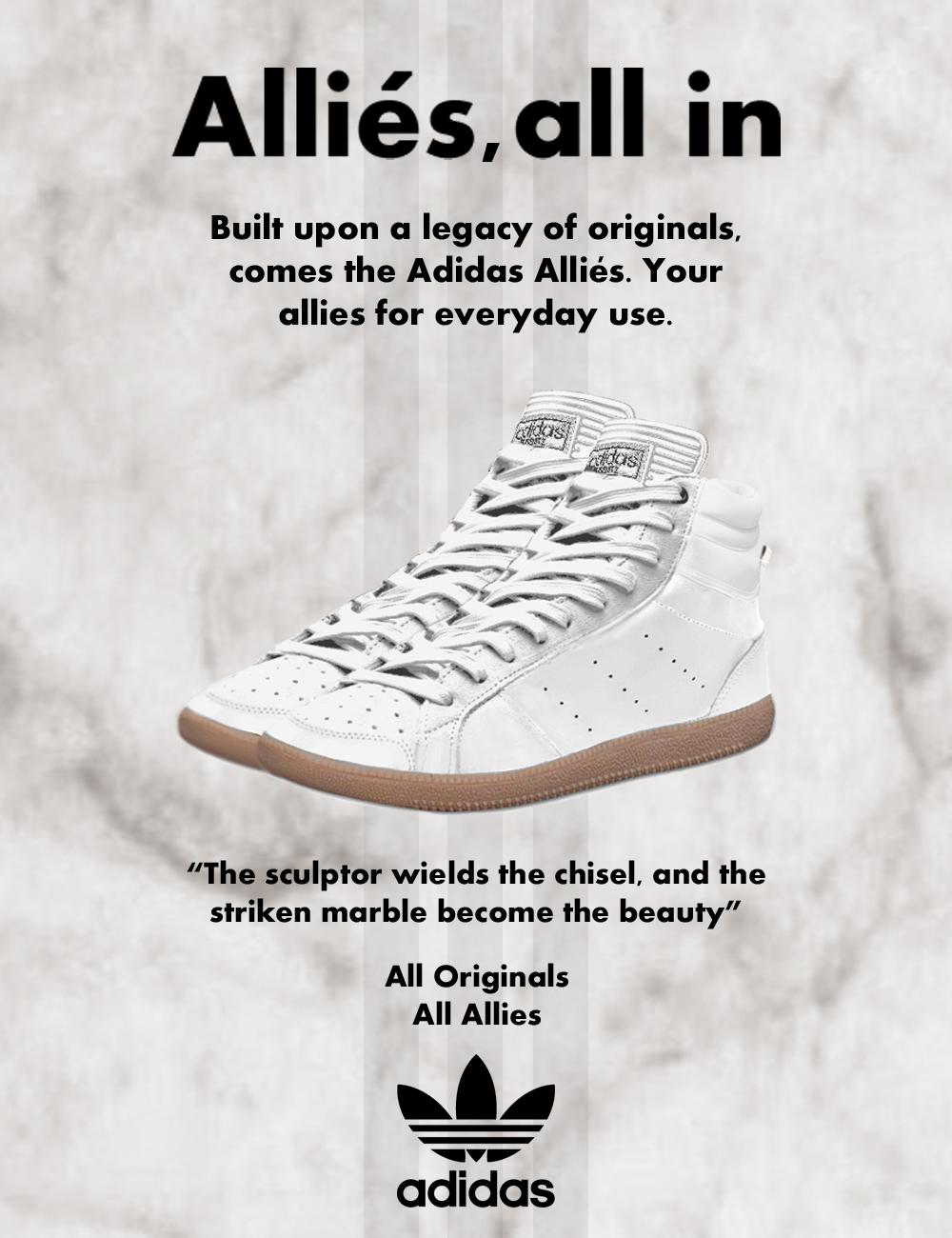 After some cleaning up,. I headed to local sneaker forums to get some feedback and see what others thought about what I was able to create. Here are a few responses: 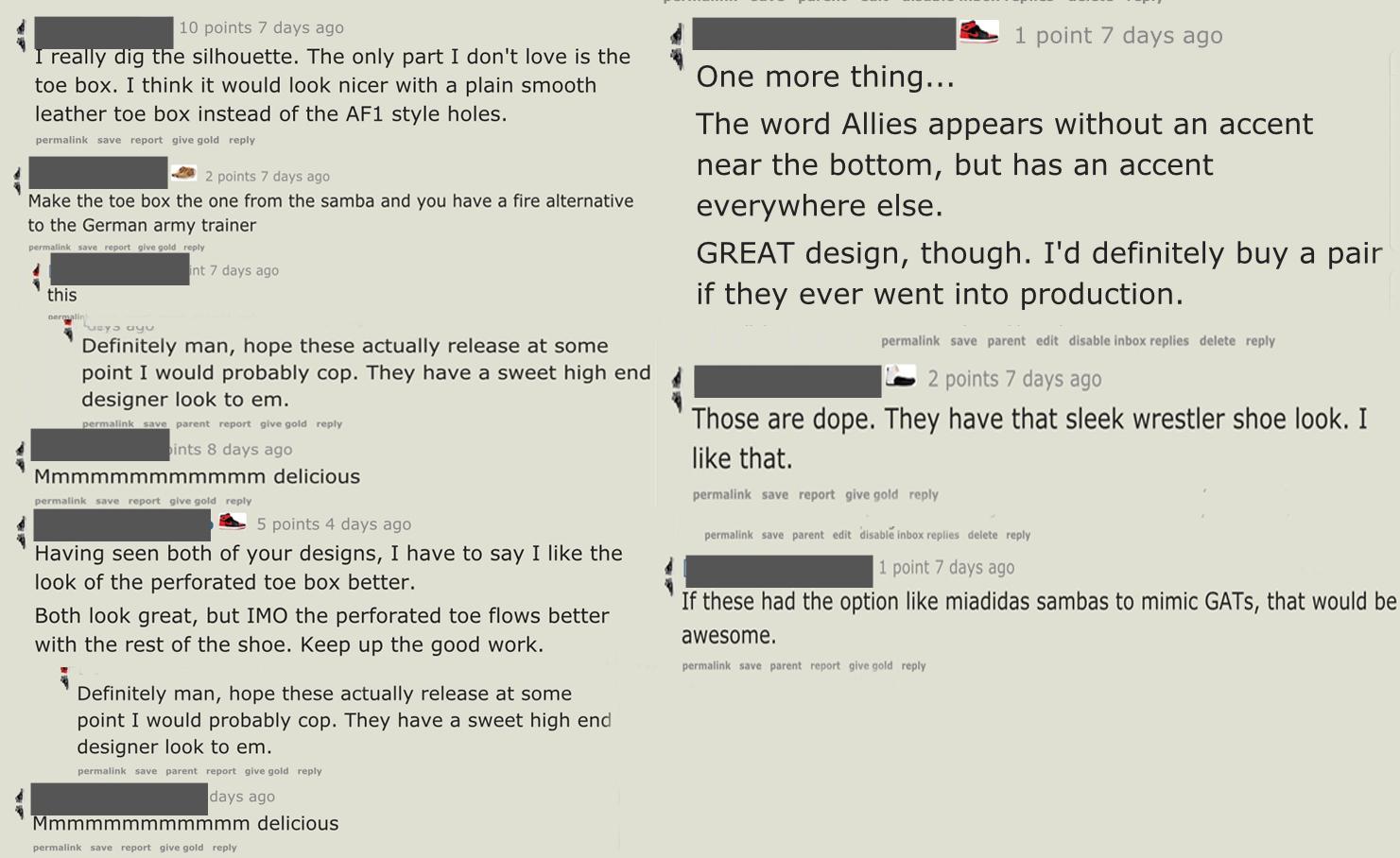 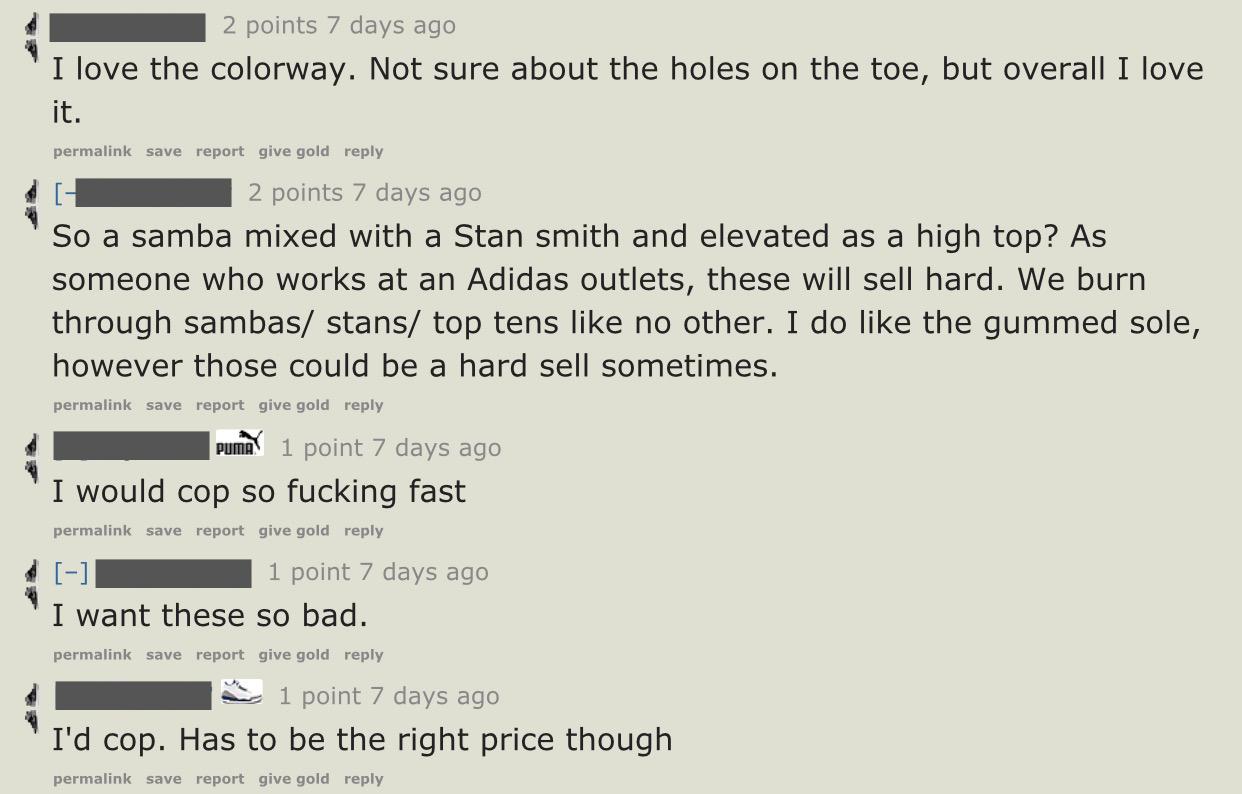 After listening to a few of the ideas that were pitched to me, I decided to make a few changes to the silhouette and get feedback on the changes. 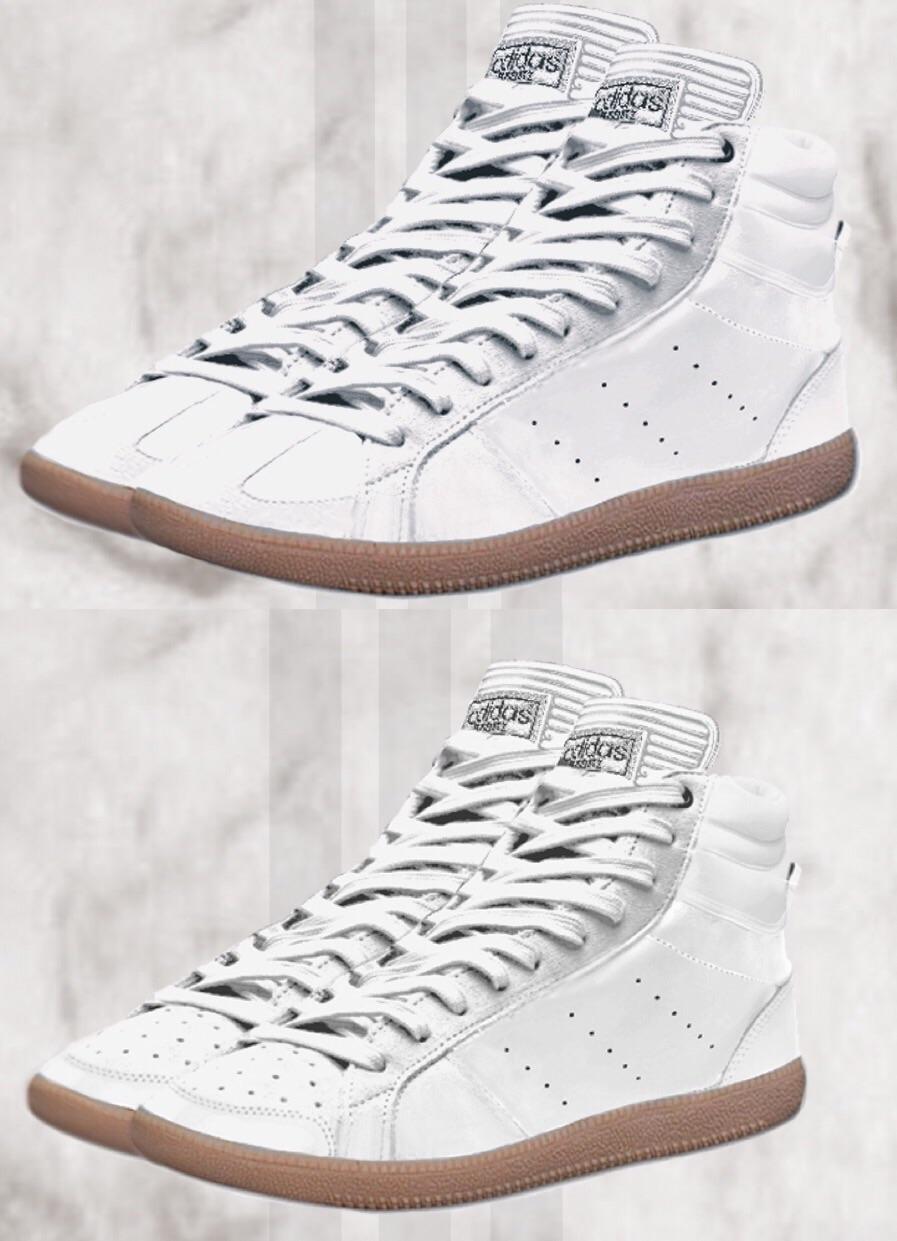 Borrowing cues found in the toe box on the Adidas Sixtus and the GAT I decided to switch up the original silhouette. I uploaded the updated model along with the original and asked which model people liked more. 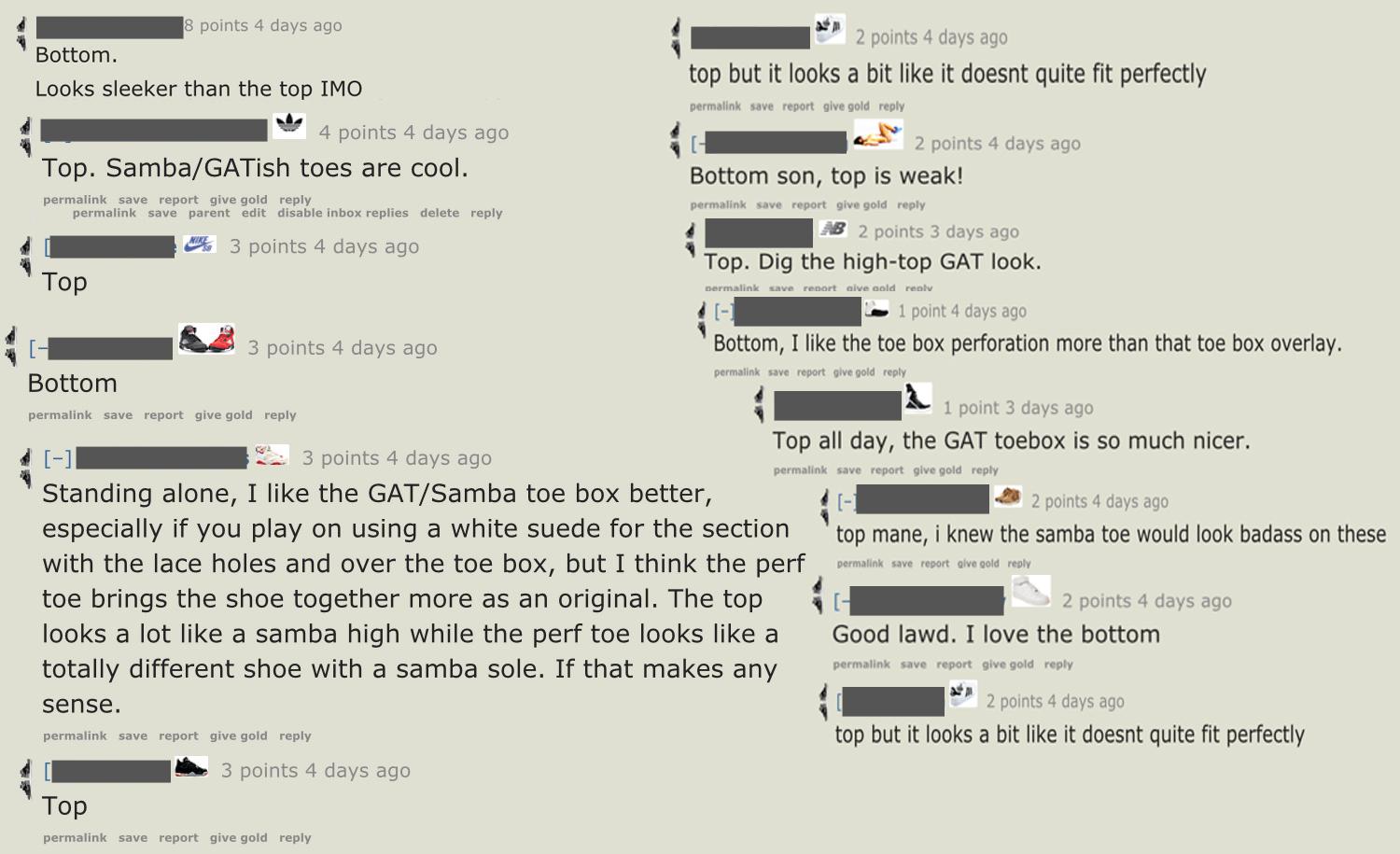 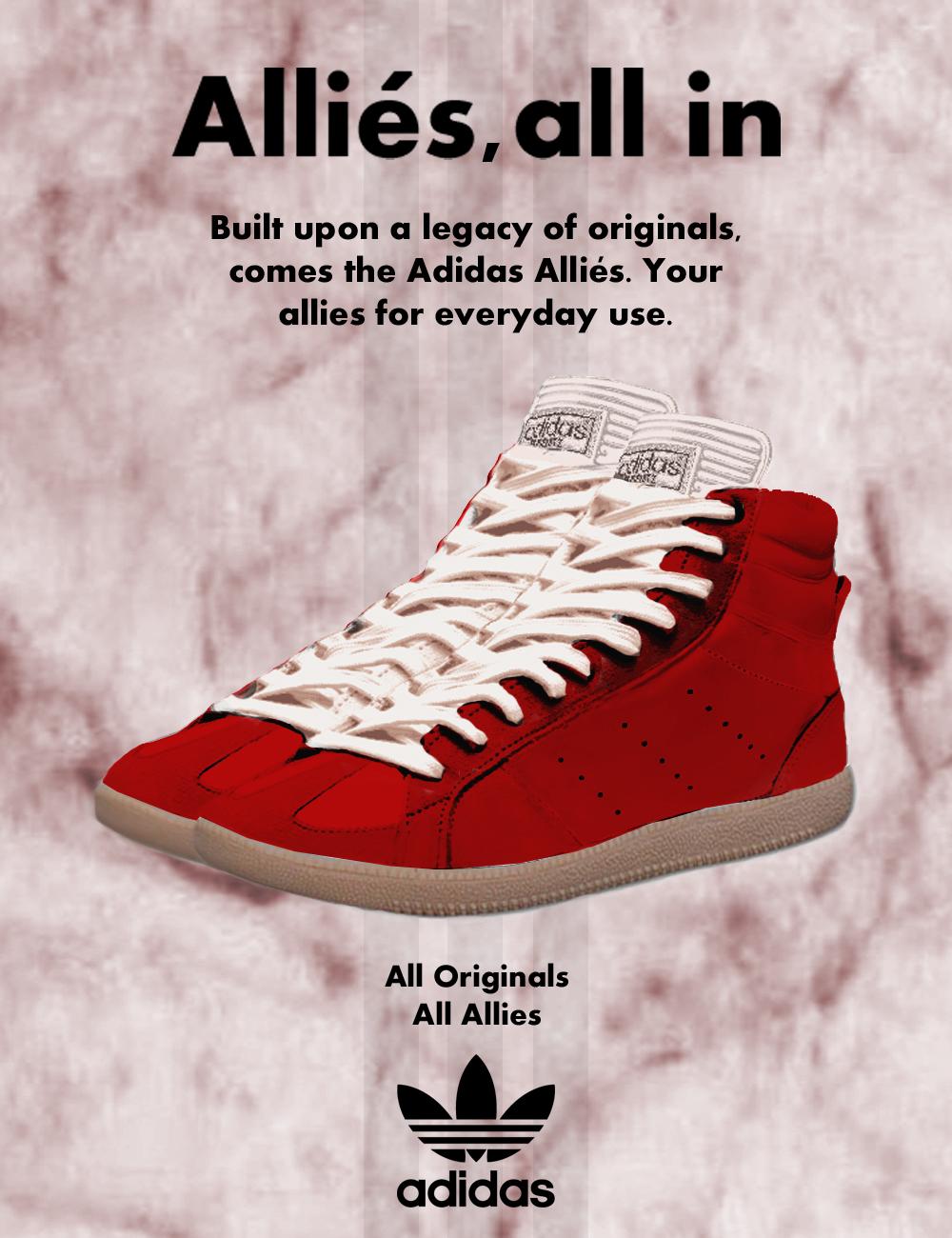 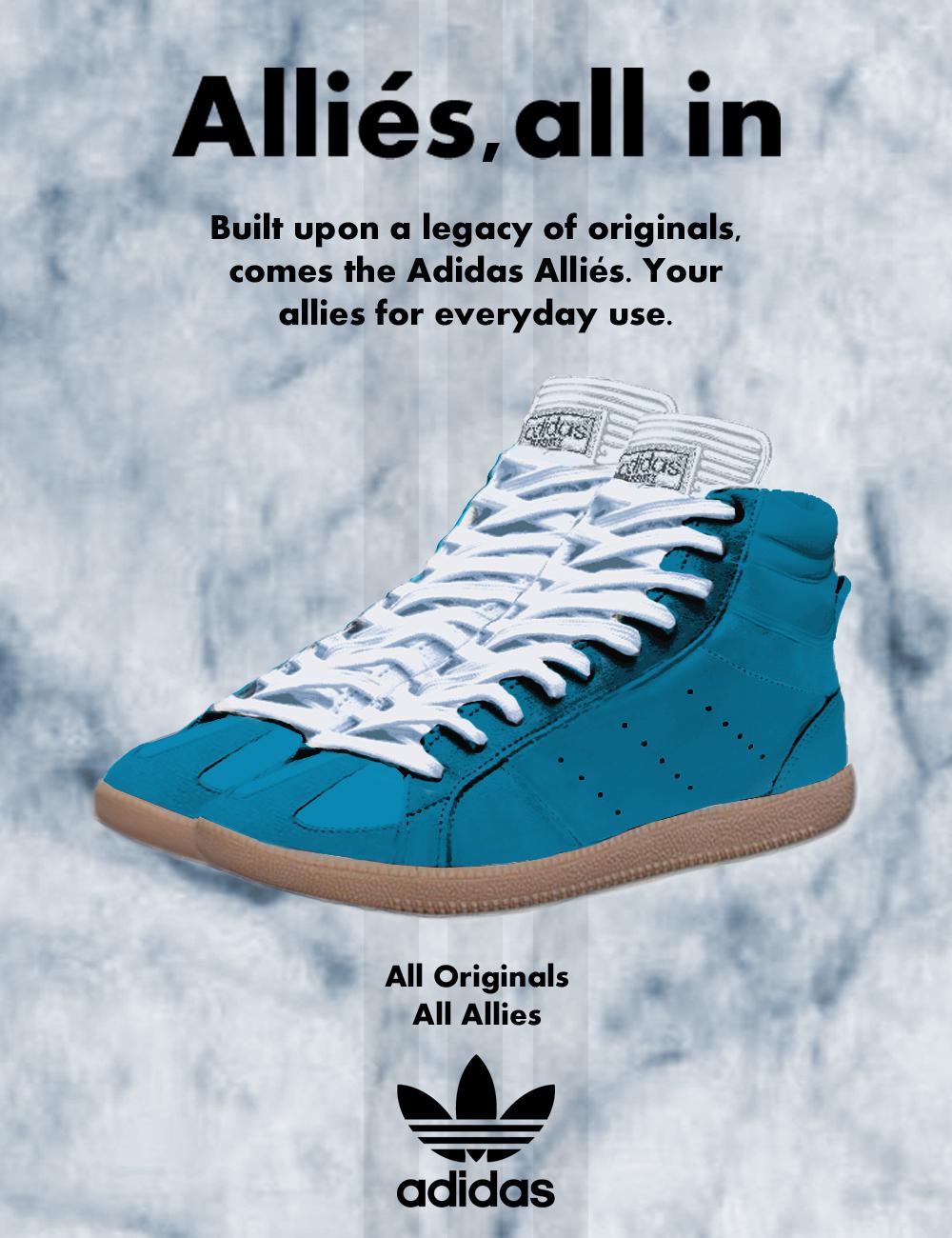 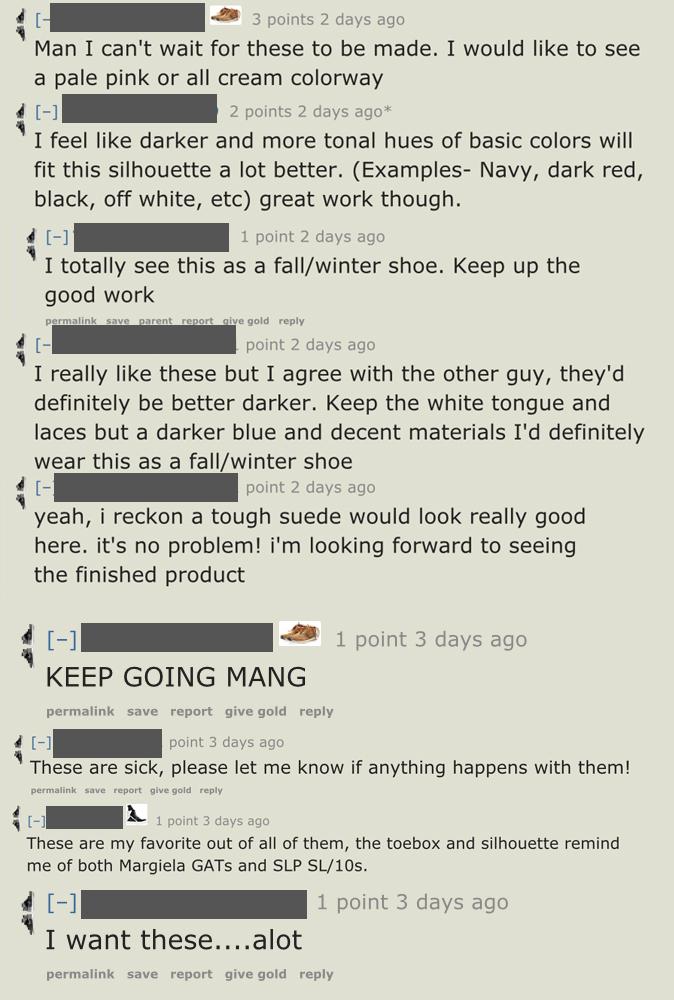 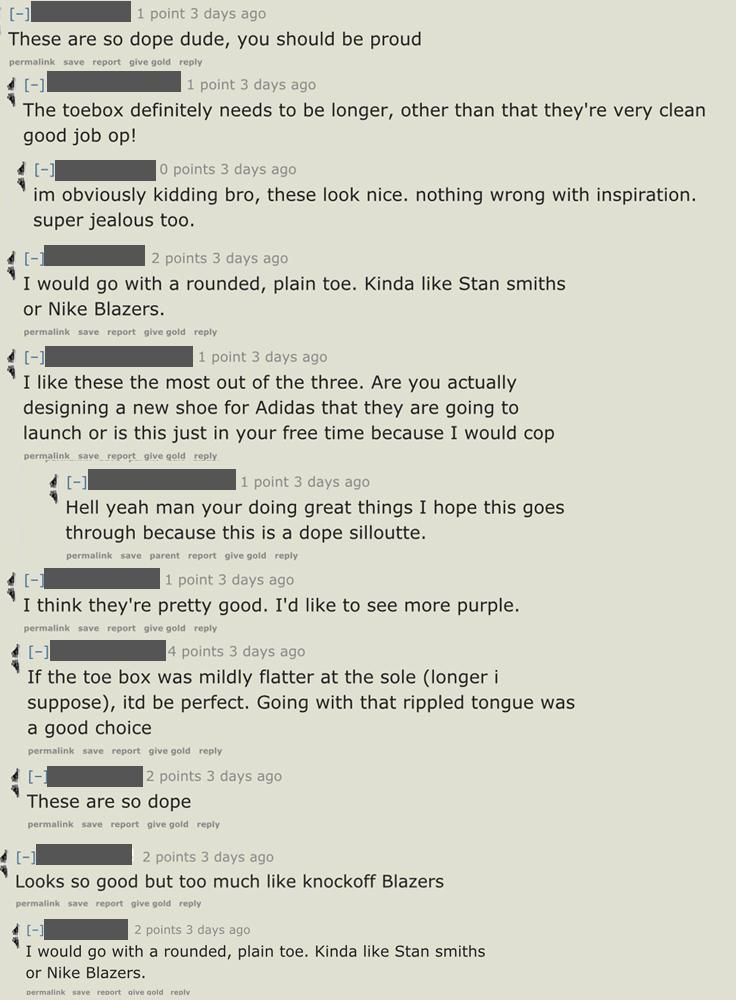 Gum Sole Pack Line Up: These really met the interst of the community 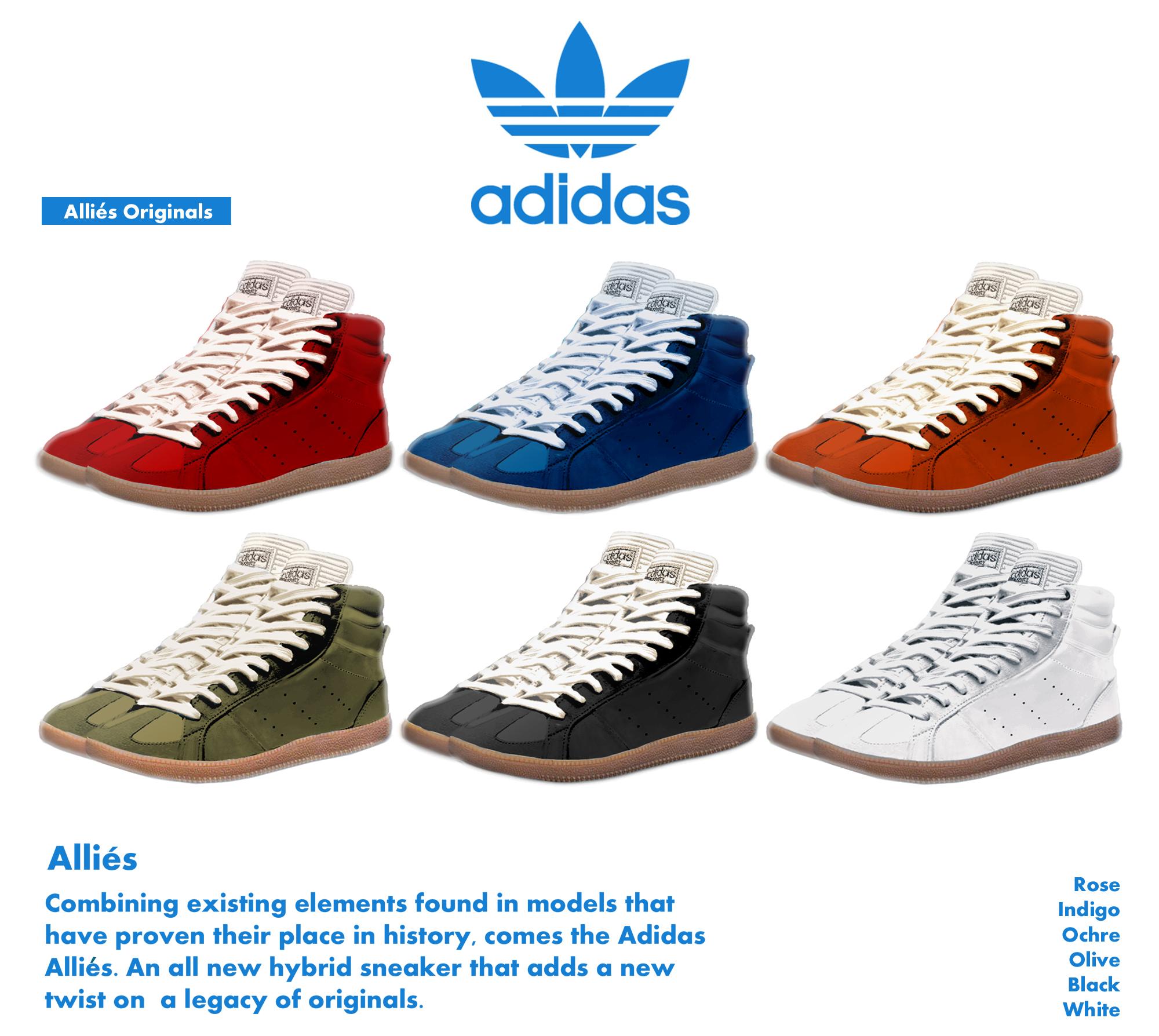 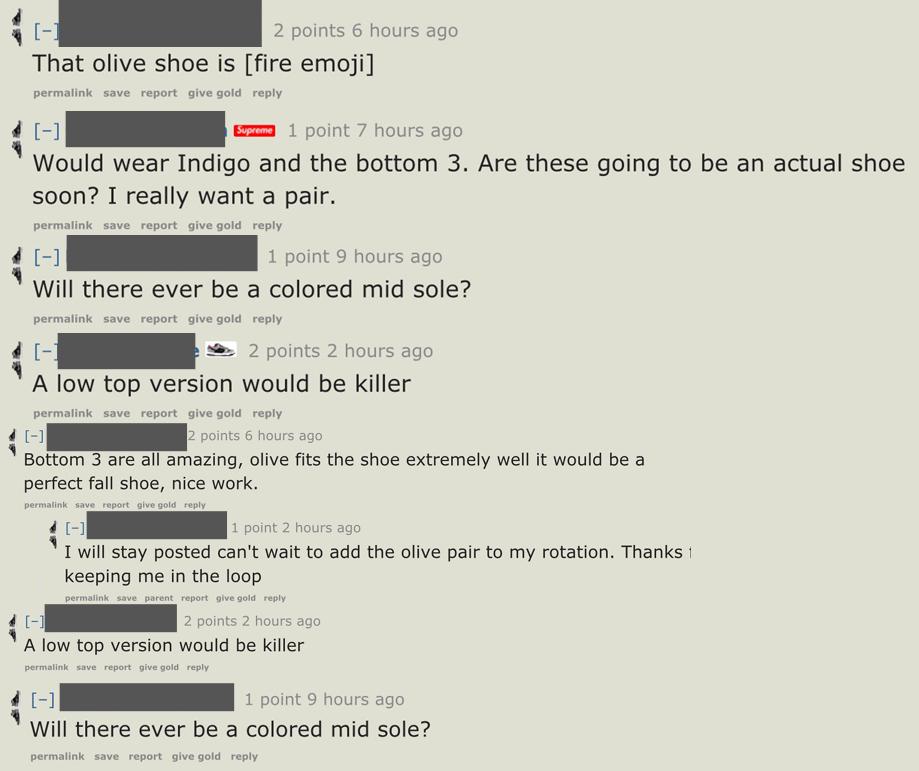 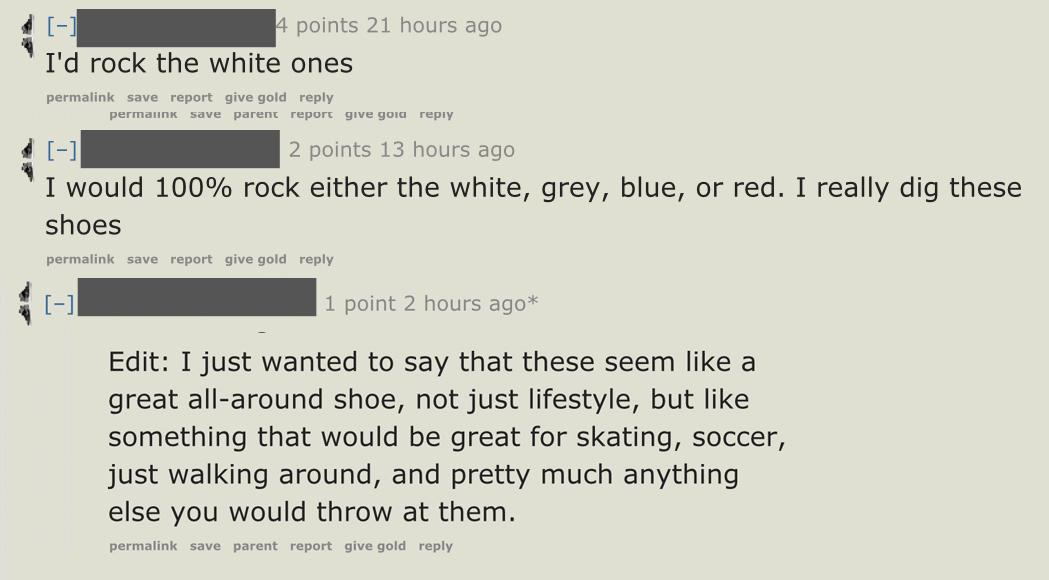 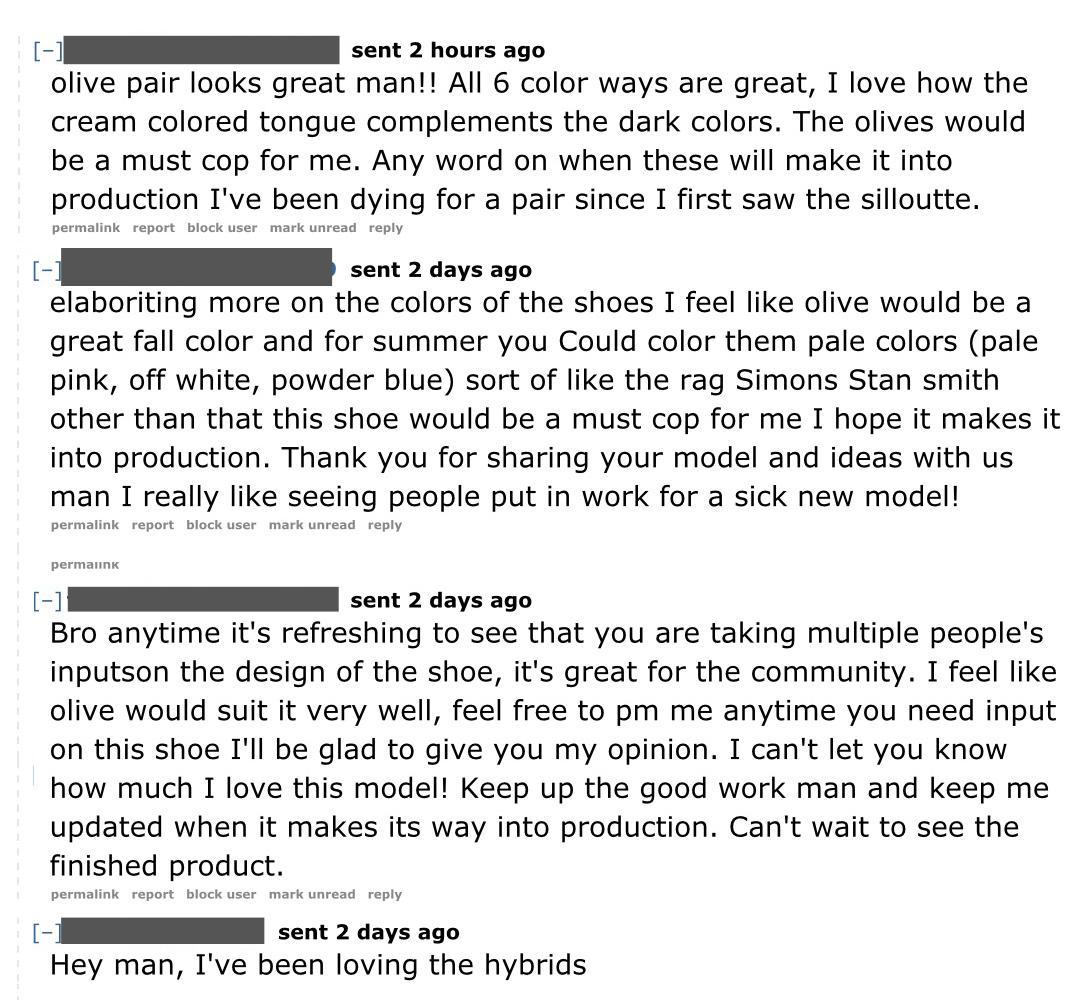 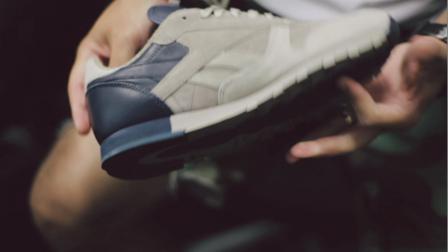 Fashion Collaborations: Creating a Successful Product, Together
Frank the Butcher and Rick Williams