All My Projects for This Course

This is the "Unwrapped" video, project #10. I was going to make this more lighthearted, and I think I still might to try another version that way, but I allowed myself to get way too over sentimental with this one! It's pretty cheesy, but it was fun to make!

This is the "Parkour Video" project 9, from the #premierepro course. Dan asked that we describe our process for some of the choices we made and how we did it:

- In the course, we made several edits along with Dan. For the project we were to start over and create a video with many of the same elements. I found it difficult doing the video while not trying to make the same creative choices that Dan made. So I decided to make a video that was as 100% different as the one we made in the course. The idea was to make the interview and footage like an old silent movie.

- I found enough of the audio of the interview to make it into a quote. I found a font with the Adobe Fonts called "Good Bad Man," which kind of looked like silent movie captions.

- I edited the footage of the guy jumping around to make it slightly faster than normal.

- I found a song on the YouTube Audio Library that had that old Ragtime-ish Gypsy Jazz-ish feel. I downloaded a preset to make the audio sound more like a record from a tutorial I found on YouTube here: https://youtu.be/P69ap20lXjY

- I found a tutorial online to make the old movie effect here: https://youtu.be/cNfaRFcOV5c

This is the "Your Place" video, project #8. Dan asked that we describe any problems that we encountered and how we fixed them:

- I used a Mograt template from Motion Array called "Simple Titles," which was a free motion graphic template they had.

This is the "More Sizzle" Video, project #7.  I overdid it with the color grading and stuff; I was just experimenting :)

This is the screenshot from the "Animating Text" project.

This is the "Wedding Practice" video.

This is the "Web Design Course Introduction" video. I made some cuts that I'm not sure Dan would like, but I did it anyway! 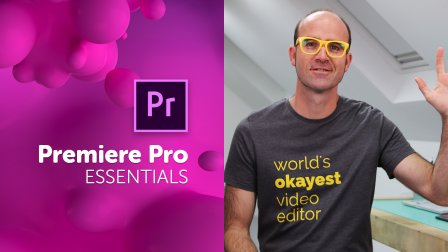