I was reasonably familiar with the alignment tools in Affinity Designer before this class, but it made me think of a few subtleties I had never considered.

The best discovery for me is the Pixel Preview tip. I knew that Affinity Designer has a pixel view, but I had never found a need or use for it. I don't imagine I will use it very often, but it is good to know that this method of alignment is available.

Another interesting consideration is the Use Preview Bounds tip. As far as I know Affinity Designer does not have anything like this. I have never wanted to align two objects with different stroke widths in the way shown for this tip, but it was interesting to figure out how I would do it.

If I were using a lot of objects with different stroke weights, I would if possible plan from the beginning to align the stroke to the inside. Then alignment tools work normally for the outer edges of the objects.

If that was not a practical approach, I would place a guide where I wanted to align the objects and use sufficient magnification to visually align them.

Pixel view would be another possibility for this situation, but probably my last choice.

Thinking about stroke width for the tenth tip (Use Preview Bounds) made me realise that there is a somewhat similar issue for the ninth tip (Align to Key Anchor), which uses a single zigzag line with a significant stroke width. Since the angles of the zigzag vary, the visual points of the zigzag do not align when the anchor points are aligned. If you wanted to align the visual points, would Preview Bounds work in Illustrator?

Because the zigzag is not closed, I cannot set the alignment of the stroke to either the inside or the outside in Affinity Designer; it just stays in the middle. If I close the line and align the stroke to the inside, the visual points correspond to the anchor points, and it is easy to snap them to a guide.

The problem with this is that if the segments I added to make an enclosed space are removed, the stroke snaps back to being aligned to centre. So those segments would have to be covered up, or, perhaps more practical, the points would just have to be visually aligned to a guide (under magnification) from the beginning.

I hope this makes sense. If I were aligning points like this, I think I would want them aligned visually, but of course it would depend on the purpose. 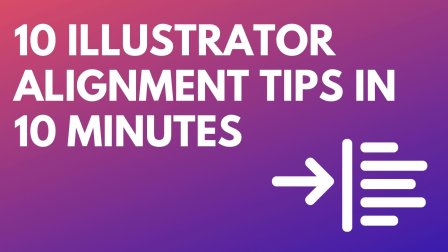