They were not the Adirondack variety that Tim Holtz also sells but can't seem to find anywhere locally or on Amazon.  They they do not have the color variety you demonstrate in the video.  I'm familiar with that kind of color separation from ice dying with dry pigments.  But these just don't do that.  I persevered regardless.

I chose not to use Yupo paper because it is essentially plastic and rather toxic to the environment when it is created and of course doesn't breakdown very well.  So I experimented with a small canvas board I had around and coated it with modge podge dishwasher medium.  I then played with the inks and alcohol.  I wasn't very impressed with my endeavor, but really chock that up to my inks and the toothy canvas I used.  I also just played with white and black inks on it.  It became an exercise in seeing images in the inks - something I could certainly use more practice in.

So then I decided to try this on tile., because I had some sitting around on a shelf and they are less toxic to the environment and I saw that they were often used with alcohol inks. That was an interesting  experiment.  I did not draw on these because they just don't dry.  5 days later and they are very easily smudged.  I saw that Krylon Varnish is often used to seal these but we have been pouring rain and I always do that kind of stuff outside.

I will have to hunt down the Adirondack version of the inks.  I love the idea of this and I have spent about a week and a half playing.  I will keep and play with the inks that I purchased for this class, but will probably use them in other ways.  I see coasters in my future once I am able to experiment with sealing these so that they are stable.  If that doesn't work - well a cotton ball and alcohol will bring them back to a clean slate and ready for some other experimentation.  I'll update when I locate the correct inks and play some more. 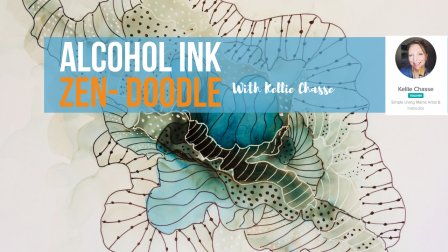