So, I just started an Instagram challenge called 50 State Logos in 50 Days, and it just so happened that I watched this Skillshare class on the first day of my challenge, so I used the skills from the class to start things off. No, I am not from Alabama nor do I have family there or really any friends from there (maybe one or two), but Alabama is the first state (going in alphabetical order) so that is my word that I chose. I chose a similar styling to Jamie's (her "L" was obvious inspiration and what brought the whole word together) and I ended up just using the gradient shadowing rather than the textured; it just seemed to look better this way. I did a quick couple of sketches to get the look I was going for, then used the pen tool to draw out the lettering. Then I separated the little parts in order for the shading to look right. This technique is different than any that I have seen or used in the past, but I really enjoyed it and it was super simple. I did this entire thing (lettering included) in less than two hours (which is fast for me). Thanks Jamie for the class, it was a fun, quick little challenge!

And here is my final piece:

Thanks, I would love to hear some feedback! 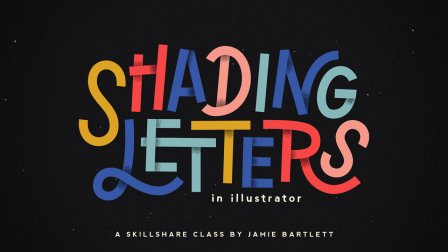