So, I have this set of guache lying around here for some time now and I never quite got around to using it a lot, since I didn't really knew how. I should note, that I don't have acrylic guache and used artists/studio guache instead. The brands I used are Lukas Studio guache and Schmincke artists guache. And I had very limited colors, since it was a mixing pack with just primary colors (and the Lukas guache had a green).

So, at first I wanted to show you my mixing chart. It is very small since I had only limited colors, as I mentioned.

Well, I guess I had some sort of color variety, but I have to admit that I missed some, especially earth tones. So that was the first thing that occurred as some kind of problem to me. Also, since I had only so little colors, all of my color hues were really similar. I had some sort of variety, since I had two slightly different blue tones, but they were not that different to really get much variety in the colors mixed.
So yeah, I was off to a really good start here xD

Before I show you the projects, I want to give some additional information, All the projects are tiny. The pot is 11x11cm, the florals 9.5x9.5m and the fruit bowl is 9x9cm. Every one of them took me about 30-40 minutes.

So let's get to the first project: A still life of a pot or something like that.
I have this metal can thingy here, where I store my pens. I think, initially it was supposed to hold a candle in some outside area, since the fish is actually a cutout and you can hang it on its handle. But yeah, that's what I went with for the first task.
I chose it mainly for its simple shape and very limited color palette. Since I had a blue and black and white color, I wouldn't have to mix a lot. I just mixed it with a little white for the base tone and used the blue tone itself for shadows. So I could really focus on the paint itself, since it was the first time I used them properly, and I had like no experience in how things would turn out.

And I have to say, it could be worse. I think I am quite okay with the result. It is a bit wonky, but overall I think I got the shadows and highlights in place and it is quite pleasing to look at.
So, that went surprisingly great. And it motivated me to go on!

So, on to the second project, the florals. I don't have flowers at home and I painted this one at around 11pm, so I just went with a picture I found online. The things I looked out for were just simple shapes and not too much different flowers, since I have never painted a floral still life ever and I didn't want to overwhelm myself. So I found this cute little bouquet with just a few flowers and that's what I painted^^

So, this was the first time I struggled with color. I had to mix a lot more colors this time and a lot of different hues to get into the details and it was a bit frustrating. Well, overall it didn't take me that long to get to the colors I wanted, but it took me a while to figure out how to hell I should shade the flower petals, since they were just so light and delicate and everything I mixed just got so dark, even with a lot of white paint.
But well, overall I think it is okay, even though I am not really in love with it. But for my first floral still life painting I can't complain ^^

So, now on to the last project, the fruit bowl. Or as I should call it, the endboss. I have this wooden fruit bowl with a pink varnish on it, that peeled off at some parts, so that gave me some interesting detail. And yeah, the rest is just fruit ^^

As you might see, I am not happy with it. It lacks depth, color variation and contrast. All the hues are just to similar, everything looks flat and I have given up on color mixing at some point since I am not nearly patient enough for it. So, the only thing I am really happy with is the apple behind the banana, since it has the detail I wanted it to have. But all the rest... its just meh.

But well, I hope you enjoyed this little walk through my first experiments with guache^^ 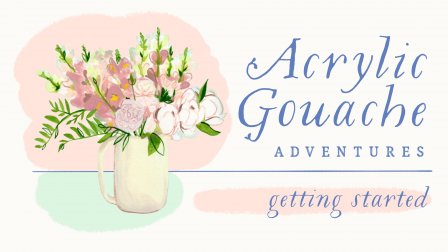